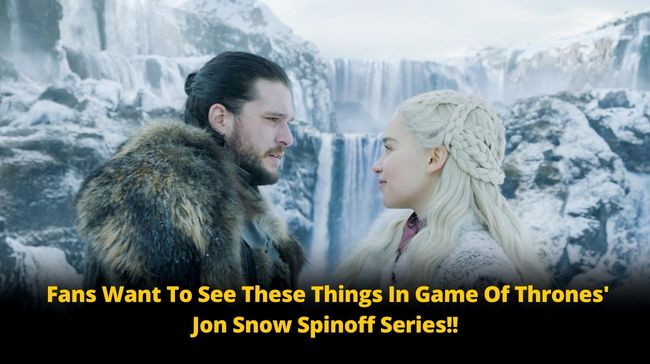 The Jon Snow spinoff series has an enormous obstacle, just like “House of the Dragon” and every other prospective “Game of Thrones” spinoff.

Not only does it have to make up for the divisive “Game of Thrones” conclusion while continuing one of the most-watched and critically acclaimed television series of all time.

So, this article is going to tell you all things we can hope to happen in the Jon Snow spin-off.

Things We Can Expect To Happen In Jon Snow Spinoff Series!!

Young People in the Forest

The focus of “Game of Thrones” has always been on violent confrontations between humans, which is a good thing.

Because humans are portrayed in George R. R. Martin’s universe as being more flexible and power-hungry than their more peaceful, one-dimensional counterparts, human plans are simply more entertaining.

The Jon Snow Spinoff series, however, can introduce fresh characters into the story rather than relying on an established canon of tales about a small number of families and their conflicts.

In his long history of challenging convention and assembling allies around the seriousness of his kingliness, Snow’s natural next step is The Children of the Forest.

In that sense, Snow’s voyage would make him the anti-Daenerys, gathering tribes of outcasts to aid in the construction of a brighter future—except that Snow would probably keep his word.

By this point, fans should know that there is no Jon Snow, at least not if we stick to custom and use birth names.

Instead, the only true Aegon Targaryen, the last known male and, following his final encounter with Daenerys, the only Targaryen ever, is Aegon, who is also the legitimate ruler of the Seven Kingdoms.

Even though he is unlikely to ever seek his birthright because doing so would almost surely result in his execution after his exile, there are a lot of narrative possibilities in a predestined monarch deciding to forgo the title, as well as in that king’s ultimate return.

Snow has always had a regal bearing, the kind that naturally pulls people to him, as we observed while discussing the Wildlings. Whether he wants to lead others or not, that is his fate. Snow may have been born to build an anti-kingdom, such as a pure democracy or a commune.

There is no doubting the allure Tormund Giantsbane radiated while he was a character on “Game of Thrones.” He became an almost instant fan favorite due to the contrast between his enormous, beard-covered, scruffy body and his mischievous sense of humor and young love for Brienne of Tarth.

Even in relative flops like the 2011 “The Thing” prequel, actor Kristofer Hivju has consistently stood out.

The happiness of Jon snow

Jon Snow is deserving of some peace and happiness more than anyone. No character in the eight seasons of “Game of Thrones” garnered thus little praise for doing so much good.

Samwell, Arya, and Tyrion are undoubtedly the frontrunners for the title of the series’ supreme hero, but none of the other characters has ever maintained an impossibly high ratio of suffering to deeds of bravery that even comes close to Jon Snow’s.

This entire discussion focused on what to anticipate from the Jon Snow spinoff series. We sincerely hope you liked reading this article! Stay tuned if you’re interested in learning more!