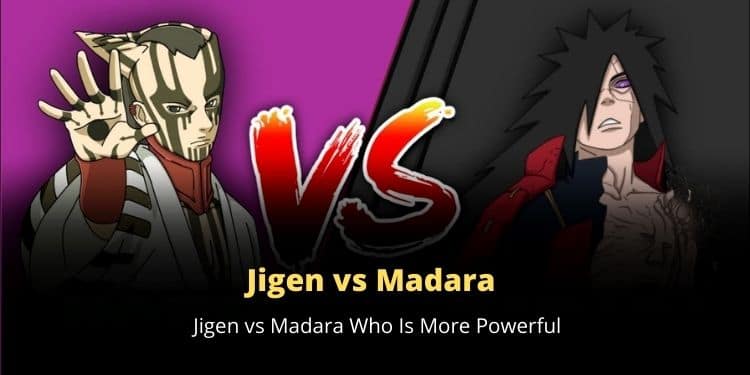 If you are a great admirer of Naruto and Shippuden, you have undoubtedly heard of Jigen and Madara. Many fans even start speculating who will excel if Jigen vs Madara fight starts due to any means.

Who is Madara Uchiha?

Madara Uchiha is The Mightiest Villain in Naruto history. He is the villain,“whose name alone was enough to scare the strongest shinobis of all the nations and his name itself could start a Mighty war.”

He was the head of the Uchiha tribe and one of the deadliest Uchiha ever born, and he created Konoha village alongside Hashirama. Madara is the sort of guy who considers all bijus as his servants, and he has complete authority over them all at the same time. He is the first person to reawaken a Rinnegan that had previously only been owned by gods.

He can easily knock down the strongest shinobis from all five kages on his alone. In Shippuden, he was playing with them and demonstrating the true might of a god.

Who is Isshiki Otsutsuki (aka Jigen)?

Jigen, on the other hand, is the most potent otsutsuki ever seen in Naruto and Boruto Verse. He is the kind of person who can dismiss any opponent. He is the one that scared the great Kaguya, who was the ultimate antagonist of Shippuden and the most considerable peril to Naruto and Sasuke.

She was also terrified of him, so she started playing rough and assaulted him from behind when he was vulnerable.

We have presented two of the most potent power families from both the Naruto and Boruto verses, now; let us move on to the next step. Here, we are going to discuss who will win if there is a fight between Jigen vs Madara.

Jigen vs Madara Who Is More Powerful – The Ultimate Power

In fact, if we think about Jigen vs Madara, Jigen is practically as clever as Madara and has even more fighting experience than him. It offers him an advantage. If we consider Ten-Tails Madara as the opponent and he outsmarts Jigen, Madara will not be able to beat him with Ninjutsu since he would absorb it in seconds, much as he did against Naruto and Sasuke.

Jigen’s body did not have much time to degenerate during the battle against Naruto and Sasuke. Thus we may deduce that if Madara manages to carry on the Jigen vs Madara fight until his body starts to deteriorate, he will win.

We all know what happened to Sasuke’s Susanoo; with a single kick, the monster knocked Sasuke out of his Susano armour. Thus, in a Jigen vs Madara battle, Madara can not utilize any of his Sharingan abilities (whether it is Amaterasu, Susanoo, or anything else) against Jigen.

Madara can only utilize his Rinnegan talents against him; but, his limbo clones share the same psyche, so he has a chance with them. So it would be 5 Madara versus 1 Jigen confrontation, even though Jigen is an excellent fighter.

Madara is not just another shadow clone to battle; he is a real monster in his own right. Jigen generally takes one step ahead of his opponent, which cuases Madara’s downfall. Madara can not utilize any of his abilities against him, and Jigen can easily negate his strikes.

Kaguya is stronger than Madara, yet Naruto and Sasuke smashed the same Kaguya. Jigen, who was not even utilizing his maximum power levels, defeated the same strongest Pair. So, it can be guessed what happens to Madara, who is a bit less powerful than our Strongest Duo, in a confrontation of Jigen vs Madara.

1 thought on “Jigen vs Madara – Who Is More Powerful? ”