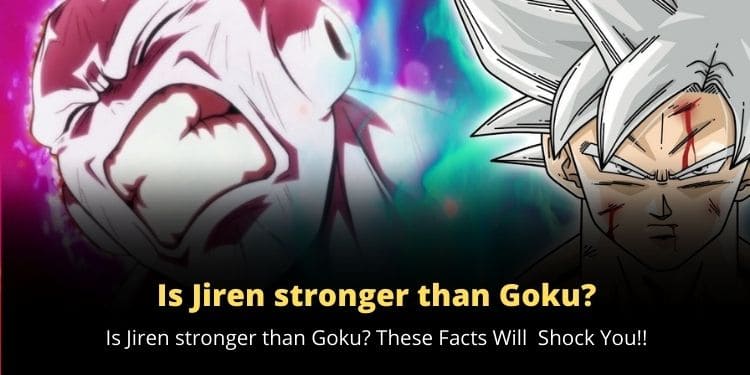 The Tournament of Power arc was perhaps the finest part of Dragon Ball Super, especially for Jiren, who enjoys confronting some of the most powerful fighters in the Dragon Ball Multiverse. With 12 universes competing, it was always a matter of who was the most powerful combatant in the universe.

Jiren from Universe 11, whose power was so tremendous that he had already overtaken his own universe’s “God of Destruction,” and this is absolutely not surprising. Jiren vs. Goku fight was the finest battle of the tournament, without a doubt. Both of them drove each other to their utmost in the battle, with Jiren emerging victorious.

Here are some details surrounding their “Tournament of Power” clash which leads to the answer is Jiren stronger than Goku.

Son Goku was introduced to us as a youngster residing alone on Paoz Mountain when we first met him. He was clearly not an average person, as we have seen that he had incredible strength and was indestructible.

From the very beginning, there were hints regarding his superpower. Furthermore, the narrative progressed and revealed Goku’s background to be much more complicated than it appeared initially.

Solar Fire: Goku has learned how to employ this formidable defense technique, which was first performed by his buddy Tien. The Solar Flare enables an opponent to generate dazzling energy and briefly blind the opponent by placing their palm over their face.

While it was not one of Goku’s more usual methods, it had come in handy in a crisis, such as when he used it to blind Great Ape Vegeta so he could collect the energy required to unleash another of his more powerful skills.

Ultra Instinct Transformation: The most currently acquired ability of Goku is also the most powerful. Goku manages to accomplish this strong transformation despite surviving the detonation of his Spirit Bomb. Goku develops a silver/blue aura surrounding him and big silver pupils while undergoing this transition. This ability is a key factor for answering the quest is Jiren stronger than Goku.

His speed and strength have been greatly enhanced, and he can now throw deadly blows in the blink of an eye. He may acquire Ultra Instinct’s perfected form as he learns to polish his skills with it. The disadvantage to this strength is that it can only be used for a while till it imposes stress on Goku’s body.

Great Ape Transformation: When Goku was a little child, his Grandpa Gohan saw his tail that set him apart from other young boys. When they view the Full Moon, Saiyans may develop tails that enable them to transform into Giant Apes. Goku claims that he accidentally killed his Grandpa when he transformed for the first time. Due to such abilities of Goku, it became doubtful is Jiren stronger than Goku.

Mature Saiyans can control their behavior, but Young Saiyans can’t, and every time they view the Full Moon, they go on destructive rampages. The first time viewers saw this was when Goku and his companions were locked in Emperor Pilaf’s fortress and stared at the Full Moon.

Destructo Disk: When Krillin was fighting Nappa and Vegeta, he utilized the Destructo Disk strike for the first time. Based on the user’s strength, the disk has the ability to cut through almost anything. Both Goku and Vegeta have adopted the attack throughout the years.

When Goku first returned to Earth, he utilized his best friend’s power to rescue the world from Super Buu, who was going to destroy it after absorbing Gotenks and Piccolo. Later, when Goku attempted to destroy Jiren during the Tournament of Power, he borrowed the move once again.

Jiren, better known as “Jiren the Gray,” is the primary villain of Dragon Ball Super’s Universe Survival Saga. Jiren is a regular attendee of the Pride Troopers and Toppo’s closest buddy.

He is the greatest fighter in Universe 11, and his strength matches or even exceeds that of a God of Destruction. He took part in the Tournament of Power in order to make a desire from the Super Dragon Balls.

Jiren is, without a doubt, one of the most formidable mortal fighters in the universe. While he was weak as a kid and for most of his youth, Jiren’s relentless quest for strength led him to become Universe 11’s greatest mortal fighter.

It is also believed that ever since he joined the Pride Troopers, Jiren has never lost single combat and hopefully it can also answer, is Jiren stronger than Goku?

Top, Universe 11’s second greatest mortal fighter and a God of Destruction candidate capable of harnessing such power for additional strength, pales in comparison to his might. He was also the first pick to become the next Universe 11 Destroyer, but he declined the offer.

Jiren has already reached the realm of a God of Destruction despite having no divine ki. Since his universe’s Destroyer, Belmod, has been unable to vanquish him in the fight, he has been known across the universes’ only mortal that Gods of Destruction have yet to defeat.

Power Impact: Jiren’s iconic move is Power Impact, in which he releases a red-orange ki blast in the shape of a firestorm. It starts off little but explodes as it hits the ground. He utilized this strike multiple times during the Tournament of Power to halt Kale’s rampage. He can shoot it like a regular ki blast when he is supercharged, and it grows tremendously in size.

Overheat Magnetron – Jiren throws a torrent of strikes against his opponent before blasting them away with a Power Impact. He then reappears behind them and unleashes a barrage of punches, knocking the enemy down. Jiren prepares another Power Impact in the shape of a gigantic energy sphere when he is at maximum power.

Energy Punch: Jiren charges his hands with red ki, and he throws tremendous blows. These are Jiren’s regular strikes when he shows a glimpse of his actual power.

Even when Goku is in Super Saiyan Blue, these blows are powerful enough to negate his Kamehameha. The quest is Jiren stronger than Goku, arises due to his great attacking abilities.

Energy Barrier: Jiren’s ki is strong enough to act as a barrier against assaults that are much weaker. This barrier got more formidable when he unleashed his full strength, allowing it to protect Jiren from Goku’s Kamehameha, Vegeta’s Final Flash, and an energetic shot from Android 17 all at the same time.

Invisible Eye Blast: Jiren’s ki is so powerful that merely by releasing it via his stare, he can launch a force explosion that can withstand all but the most powerful opponent strikes. He used it to repel Goku’s Universe 7 Spirit Bomb, stop Golden Frieza’s deadly rampage, and even scatter Vegeta’s Final Flash.

Power Up – Jiren may boost his battle powers by concentrating his ki. His command of it is likewise impressive, allowing him to conjure massive volumes of it very immediately and with little effort. Jiren’s body emits a red aura with a texture similar to fire. An extra layer makes him appear to be practically burning whenever he unleashes the full force of his strength.

Goku Vs Jiren – Who Will Win?

During their fight, Goku undergoes a dramatic transformation from the unfinished form of Ultra Instinct (aka “Ultra Instinct Omen”) to the completely finished version of Ultra Instinct. With that power-up, Goku is able to put down a significant blow on Jiren, and for a brief time, it appears that Universe 7 will win the Tournament of Power.

When Goku’s Ultra Instinct almost knocks Jiren out of the ring, Jiren refuses to give up the fight. In fact, Jiren is enraged at Goku’s quick surprise attacks, declaring, “Attacks that exploit openings are not true strength!”

According to Whis, Goku’s ability to sustain Ultra Instinct as a defensive technique is tremendously difficult. It requires a precise balance of force and serenity, which is quicker than thought and needs practice.

However, Ultra Instinct is still too young and never tested against Jiren’s great power, which is not entirely negative. The approach was a novelty, but using it for deciding is Jiren stronger than Goku would have been a cheap and hollow conclusion.

Like the anime, this chapter of the manga closes with Goku using the one edge he has against Jiren, which is teamwork. It is a far more interesting ending that broadens Dragon Ball’s range beyond Goku.

Yes, Jiren can defeat Goku. Goku has often tested his limitations, most notably in the Tournament of Power. He even gained Ultra Instinct, which is difficult for gods to achieve. Jiren still has the upper hand on Goku even without Ultra Instinct.

To destroy Jiren, Goku needed the help of both Frieza and Android 17. Goku’s sole chance of fighting Jiren on his own is to master Ultra Instinct and be able to use it at will. Goku will never be the most powerful mortal without mastering the Ultra Instinct.

Furthermore, Goku has not had enough Ultra Instinct training, which means that his body will continue to break down after he employs the method, even if only for a few moments. Jiren, on the other side, has significant control over his abilities, and he will become better as time goes on.

Being the most prospective candidate in the Tournament of Power arc, every fan is ecstatic to know is Jiren stronger than Goku?

Here you all see the powers and abilities of both Jiren and Goku. All things considered, Goku is not yet stronger than Jiren, and there are a variety of reasons for this. However, Goku has future scopes to win over Jiren if he can master the Ultra Instinct in the upcoming days.

Make sure to stay connected to get hot updates on the latest Dragon Ball series and movies in the future.

3 thoughts on “Is Jiren stronger than Goku? These Facts Will Shock You!!”