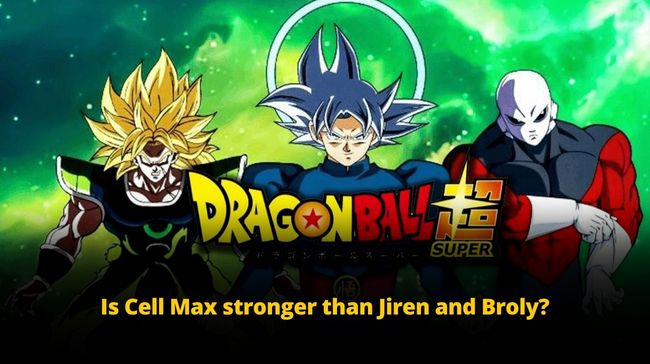 Is it true? Is Cell Max stronger than Jiren and Broly? Here is all we know.

We all know that in the latest movie Dragon Ball Super: Super Hero, an old foe was reborn.

That’s correct, and we are talking about the most chaotic android we have ever seen. Cell was reborn.

The new version of Cell was known as the Cell Max and was the creation of the grandson of Dr. Gero, Dr. Hedo and he created two more androids, Gamma 1 and Gamma 2, whose main work was to revive power.

Although not fully finished, Cell Max was able to cause a lot of pain. Our Z warriors faced a complex time-fighting Cell Max. Ultimately, in the end, they brought him down with the all-new transformations and teamwork.

But it raises a question, is Cell Max stronger than Jiren and Broly? Let’s find out!

Can Jiren and Broly beat Cell Max in Dragon Ball?

Both Jiren and Broly in the DBS universe have proved their strength. The demonstration of their powers gives everyone a signal that they are not a rookie.

In the case of Jiren, even Whis told Goku and Vegeta that he is the mortal who has surpassed the level of God of Destruction.

While others believed this was nothing but hype, he proved this in the ‘Tournament of Power”.

Within a fraction of a second, he could defeat his enemies with flying punches. The one who stayed regretted the decision more.

The moment of astonishment came when he could throw Spirit Bomb back at Goku with his single hand. Even the most powerful Majin Buu was not able to do it. He even matches Goku head to head in his Ultra Instinct form. It was the last time Jiren was mentioned in DBS, and his whereabouts were unknown.

While in the case of Broly, he was nothing like an ordinary Saiyan. Where a Saiyan transforms himself in multiple forms, it was not the case with him.

He was born with the ability to go Legendary Super Saiyan, a being with immeasurable power. He has the talent to elevate during a fight. The more he fights, the more he becomes powerful.

He even grows to a level where he turns himself into a beast who loses his calmness and wants to fight. So we can say that he will be able to beat Cell Max.

Is Cell Max stronger than Jiren and Broly?

Technically speaking, Cell Max was manufactured to defeat Goku and Vegeta. So, it is evident that he will possess the power to bring down both Goku and Vegeta’s most vital forms.

However, he was engaged very early and didn’t achieve his full capabilities. Goku beat Jiren, and Broly, on the other hand, was undefeatable in front of Goku and Vegeta.

So, the answer is quite simple, and he will be able to defeat Jiren but not Broly.