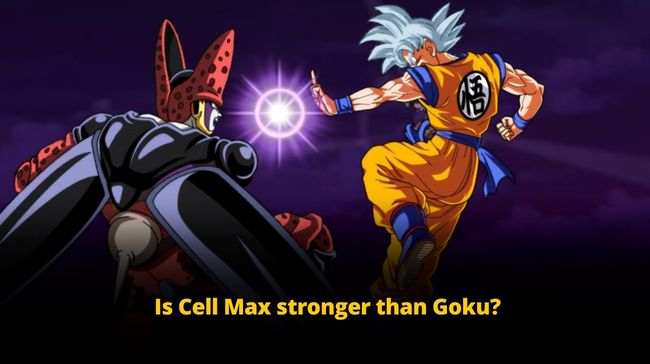 The current level of power Goku is way off the charts compared to Cell Max. However, the Cell Max we are talking about was still in his incomplete form.

If we talk about his final version, we can say that he will level with Goku regarding power levels.

Several reasons prove that Cell Max is not stronger than Goku. We will discuss them further in detail.

How Strong is Cell Max?

Cell Max is a 2.0 version of Cell and is more powerful than him. It took Gohan to defeat him to achieve his beast form, demonstrating how powerful Cell Max is.

Cell Max is an advanced version of Cell previously dominated by Goku earlier in the series.

The enemy Red Pharmaceuticals, also known as the Red Ribbon Army, finds Dr Hedo, the Grandson of Dr Gero, and with his help, creates Cell Max. The primary purpose for the creation of Cell Max was to take revenge on Goku.

Is Cell Max stronger than UI Goku and UE Vegeta?

Is Cell Max stronger than Goku? The answer to this question is no. Cell Max is not as strong as the Goku UI and Vegeta UE forms.

Goku in his Ultra Instinct form would evade all the attacks, while on the other hand, Vegeta would smash with his power in a fraction of a second.

UI and UE form is quite parallel to Gohan and Piccolo. Even though Gohan Beast is a mighty form of Gohan, it is still landing below UI and UE form.

Technically speaking, a completed Cell Max may be more potent than Goku and UI and Vegeta UE.

However, he is not a match against the Mastered Ultra Instinct form of Goku or even Gogeta, who is a fused version of Goku and Vegeta.

Even if somehow Cell Max can defeat both Goku and Vegeta UI and UE form one by one, there is no possibility that he will be able to beat them together.

Is Gohan stronger than UI Goku and UE Vegeta?

Gohan still has a long way to go if he wants to defeat Goku UI and Vegeta UE. However, if he trains regularly in his Beast form, there might be a possibility that he may surpass them in power level.

How strong is Orange Piccolo?

Recently, a vague statement was released by Akira Toriyama that a new form of Piccolo would be able to bring down both Goku and Vegeta.

Technically speaking, Toriyama was not wrong. However, Piccolo is still very far compared to Goku and Vegeta’s power level.

Conclusion of “Is Cell Max stronger than Goku?”

So, with the above discussion, it is evident that Cell Max is no comparison in front of Goku.