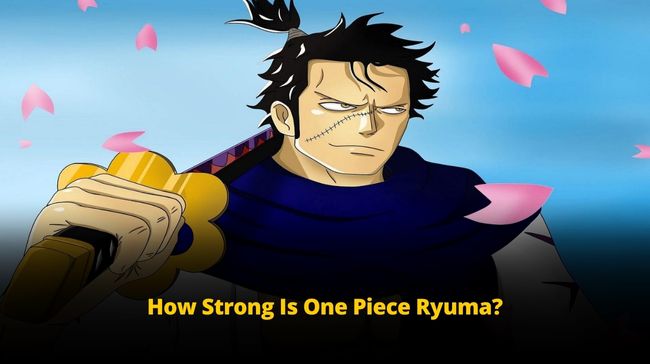 The Internet is all raving about the manga series One Piece and the fans want to know as much as they can!!

Today we are here to let you learn more about the best swordsman throughout the Japanese series One Piece – Shimotsuki Ryuma and how strong is One Piece Ryuma!

Who was One Piece Ryuma?

The legendary and world-famous samurai Shimotsuki Ryuma had roots in the Shimotsuki Family of Wano Country.

As we all know, he lived in Wano, when the Country was known as the “Country of Gold.”

That was the era where the great Ryuma lived. He was well known for his mastery of swordsmanship, which earned him the title everyone looked upon..

The Sword God. Along with being an excellent and undisputed best swordsman, Shimotsuki Ryuma was a  direct ancestor to Shimotsuki Ushimaru as well!

The Powerful Ryuma – His Breathing Days

The powerful Ryuma was unbeatable. Once in a lucky battle, where Zoro saved Brook, somehow Zoro managed to defeat Ryuma.

The battle was to free Zoro’s crewmate’s soul, which was stuck inside the body of a zombie.

In the entire timeline of One Piece, no one except Ryuma and Dracule Mihawk could make their sword Shusui – a Black Blade! This was an incredibly powerful Armament Haki that Ryuma possessed.

Besides these two, no one has ever been able to achieve this exceptional and fantastic feat.

How Strong is One Piece Ryuma and Zoro – How Identical?

In the much-loved manga series One Piece, the characters Ryuma and Zoro seem to be reasonably identical in terms of aesthetics, facial structure, or scar on the left eye.

The only markable difference is the hair colour – Ryuma has black hair, while Zoro flaunts green hair. And not to forget, their ambition to become the strongest is shared as well!!

Even their fighting skills and styles are similar, reflecting their strength and courage! This clearly shows how strong a character Ryuma was.

Zora and Ryuma in One Piece

Though resembling in many ways, it is only once that Zoro and Ryuma come face to face.

Even if Ryuma was reanimated as a corpse, then it happened only once. It is believed that the soul of the sword is pleased to serve the one who defeated its preceding owner.

It is thought that this was why Ryuma gifted his sword Shusui to Zoro, which created a link between the two strongest swordsmen.

Do you still want to know how strong One Piece Ryuma is!!

Ryuma and His Attacks

The author Eiichiro Oda has specifically emphasised how similar Zoro and Ryuma are.

Zoro’s two most powerful attacks – The Dragon Blaze and the King Of Hell are based on the sword slash that Ryuma used to kill the giant dragon in Monsters.

Yes, it is undoubtedly believed that Shimotsuki Ryuma is one of the most potent swordsmen in the entire timeline of One Piece!

So now you know how strong One Piece Ryuma is…Are you a Ryuma fan??? Do share your reviews with us!