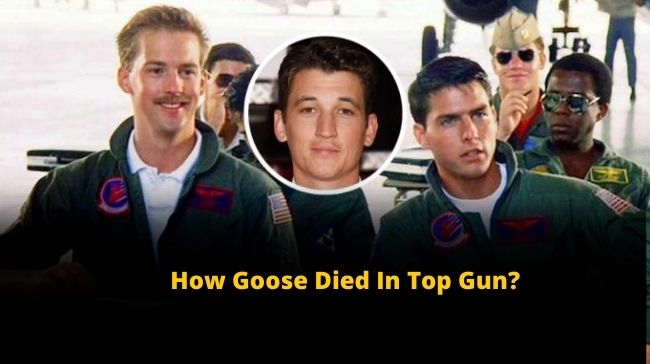 How Goose died in Top Gun? This is one of the trending questions on social media. So, Sassyshows is here with the answer. Read the complete article to know more.

Introduced as flying companions, Maverick and Goose’s friendship was not just about their professional endeavors; they’re also good companions outside of work.

The Top Gun proved this after Goose’s family came to the academy to meet Maverick. Goose’s wife was especially loved by Maverick who was constantly joking about his past relationships before his new partner, Charlotte “Charlie” Blackwood (Kelly McGillis).

When Goose passed away, Carole didn’t blame Maverick for what transpired. Instead, she offered Maverick words of encouragement to fly even though she knew how difficult it would be to achieve his goals as a naval pilot without his trusty Rio. This is a mystery to everyone: how Goose died in Top Gun?

If the same question – How Goose died in Top Gun is bothering you, here is the answer.

Who Is Goose In Top Gun? Maverick and Goose make one of cinema’s most iconic duos, with the two pilots having complete trust in each other during life-or-death situations.

And their bond makes Goose’s death all the more tragic and hurts even more with his wife in the top gun. But how Goose died in Top Gun, and who was at fault for the severe accident?

Goose, played by Anthony Edwards, was Maverick’s fighter aircraft. That means he handled communications, navigation, and a number of other tasks while the pilot focused on flying.

As the duo passes through trials to achieve the TOP GUN status, they’re paired with Iceman to help take down enemy fighters for a combat simulation. But quickly, things go wrong, ending in Goose’s untimely death.

How Goose Died In Top Gun?

The top two trainees in the Top Gun group, Maverick, and Iceman with their respective RIOs entered the training session in tandem, energized to be the victor.

The training included them in the same team as their peers, but points were scored independently. They both eventually found themselves in a position to shoot LCDR Rick and give them the chance of securing victory for the students.

When Iceman caught up to Maverick and Goose, however, he wasn’t able to make an accurate shot. He was repeatedly urged to get away from the way so that Maverick could get the ball however he remained in the middle, determined to knock out Jester and stop his closest rival from scoring points against him.

Whatever he tried, Iceman just couldn’t get an airlock on Jester’s plane and forced him to eventually end up breaking off. However, when Iceman left his way it was already too late. Maverick was too close to his trail, which led him to crash directly into his jet wash.

This led to his aircraft experiencing a fire out of both engines, resulting in a fatal flat spin. Although Maverick was capable of safely ejecting, Goose didn’t; he struck the canopy on his exit with a powerful collision that resulted in his death. This is how Goose died in Top Gun.

Who Is At The Fault?

At the conclusion of the film Top Gun, Maverick appeared to have come to terms with the loss of Goose.

However, this doesn’t seem to be the scenario. Top Gun will revisit the tragedy through the return to Bradley “Rooster” Bradshaw.

Maybe this is the time that the sequel acknowledges the part Iceman was in after the demise of Goose. The question of how Goose died in Top Gun is still unanswered by the show.