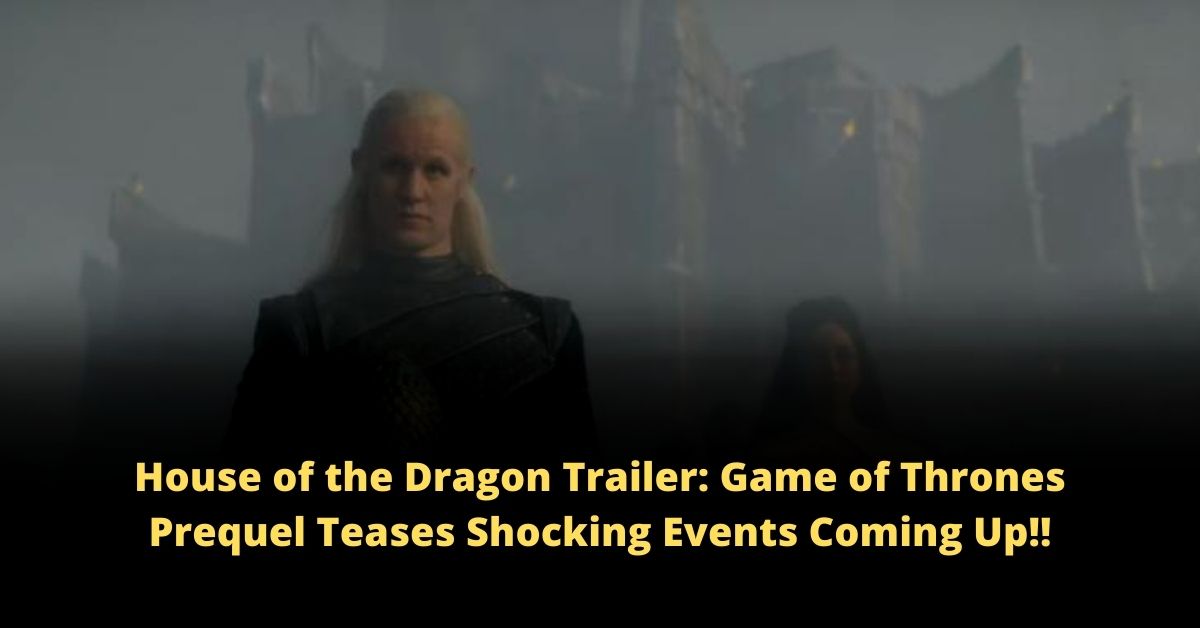 House of the Dragon Trailer is finally out, and it brings much more than expected. Here is what the official trailer teases about the upcoming project.

The show is based on author Martin’s A Song of Ice and Fire book series and related materials and is set mostly in Westeros during enormous political turmoil.

While the fans were clamoring after the wrap-up of the previous series, it seems the wait is finally over.

Following the conclusion of HBO’s blockbuster series Game of Thrones, the streaming platform has returned with a fascinating spin-off of the internationally acclaimed series.

The almost 2-minute long video debuted on HBO Max on Thursday, giving hungry viewers a glimpse inside the Targaryen Civil War in House of the Dragon.

The novel Fire & Blood by George RR Martin serves as the basis for the prequel series. The Targaryen dynasty reigns dominant over the seven Kingdoms of Westeros in House of the Dragon, set about 200 years before the renowned predecessor series.

The series will feature new characters and chronicle the Targaryen dynasty’s collapse, including the civil conflict known as the Dance of Death.

Sneak Peek Into The House Of The Dragon

Set 300 years well before the events of Game of Thrones, the series depicts a tumultuous time in House Targaryen’s history, one that pitted sibling against sibling and dragon upon the dragon. Of course, the subject of contention is who should rule on the Iron Throne.

The show stars Paddy Considine as King Viserys I Targaryen, the fifth king of the Seven Kingdoms, and Matt Smith as Prince Daemon Targaryen. The heir was presumptive to the Iron Throne, Emma D’Arcy, as Princess Rhaenyra Targaryen. King Viserys’s firstborn child who aspires to be the first Queen to sit on the Iron Throne, Olivia Cooke as Lady Alicent Hightower,

The teaser reintroduces the throne battle, with Princess Rhaenyra Targaryen vying for the position of dictator against the backdrop of a horrific civil war, where legacy will take precedence and sacrifice will be required.

“Men would rather destroy the country than see a woman ascend the Iron Throne,” Princess Rhaenys Targaryen said. She’s speaking with Princess Rhaenyra, who has been named King Viserys’ successor. Ser Otto Hightower, the King’s Hand, is also shown urging his daughter Alicent to “play a nasty game.” “You have the determination to win it,” he claims.

House of the Dragon takes place 200 years before the events of the internationally popular television series Game of Thrones. The new 10-episode series will depict the narrative of House Targaryen and will be based on George R.R. Martin’s novel Fire and Blood. HBO recently published a batch of stills from the new HBO Max series, premiere on August 21.

Fans Reaction On House Of The Dragon Trailer

Game of Thrones fans has expressed enthusiasm for the upcoming prequel, inspired by George RR Martin’s novel series A Song of Ice and Fire.

Many fans expressed their excitement for the series, hoping it would not disappoint them like Game of Thrones’ eighth season.

According to a fan, “This appears to be quite promising. I’m hoping they can make this show fantastic so that may alleviate the sorrow of Season 8.” Another person said, “GOT was a masterpiece, regardless of what transpired in season 8. I want to see something similar to Game of Thrones.”

So, what are your views on the House of the Dragon trailer? Let us know in the comment section.