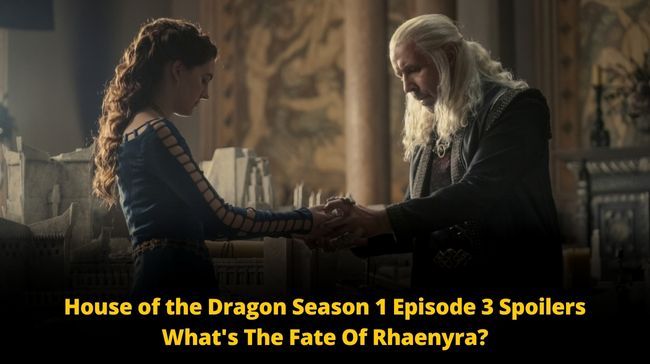 A preview of House of the Dragon Season 1 Episode 2

Before discussing the House of Dragon Season 1 Episode 3, let’s find out what happened in episode 2.

The episode takes off with the scary island full of crabs, where men are tied up against their will as a punishment. Later it was discovered that this was the work of their pirates and the people of Free cities—the concern in the ongoing council of King’s Landing by Corlys Velaryon.

Though the fears were severe, it was neglected by King on the board, who told him that he would be compensated for his losses. However, King approached him later with an apology and told him in the private conversation that he would look into the Free Mans. Along with it, many shocking things happened, which will be discussed further.

Things that happen before the House of Dragon Season 1 Episode 3 will be screened!!

In the latest episode, a shocking thing happened that no one imagined. A dragon egg was stolen from Dragonstone, and no one knew how it happened. Later on, being asked with Dragon keepers, it was discovered that it was taken by Daemon Targaryen, the King’s brother, for his future son.

This made King Viserys 1 angry and declared war against his brother. While the soldiers were at the entrance of the castle, they were ambushed by Daemon on the way and were threatened by him that the consequence would not be good if they pursued further.

However, Princess Rhaenyra followed them in between and convinced Daemon to let go of the egg assigned to her late brother Baelon. Fans got goosebumps after seeing the intense conversation between the two Targaryen. They just can’t wait to get more of this new GOT series.

As per the current situation of King Viserys 1, the realm expects him to get another wife soon after his wife’s death. The main reason is to maintain the continuity in the bloodline of the King.

The problem also arises for the King to choose a strong match for him. There were two choices in front of him; one was the little girl of the wealthiest man in King’s Landing, the daughter of Corlys Velaryon, and the other was the daughter of Ser Otto, his Right Hand, Alicent Hightower.

According to the traditions, Corly’s daughter was the perfect match for him, but unexpectedly he chose Alicent as his wife and decided to marry her. It raised various concerns among the council, but the voice of the King has spoken.

Now the question is if the King had an heir with his new wife, would Rhaenyra be able to maintain her status as the current heir? All are ready to be disclosed in the upcoming House of Dragon Season 1 Episode 3.

Read More – House of the Dragons: How The Show Connects With Game Of Thrones?