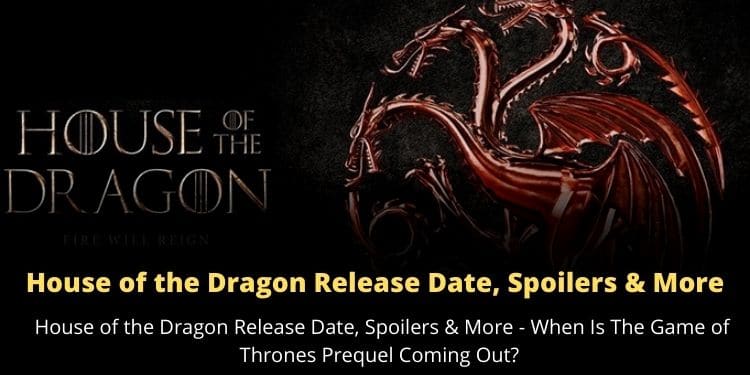 When it comes to one of the most thrilling journeys of action, suspense, and romance, one show’s name that always strikes our mind is Game of Thrones. But HBO is planning something even grander.

The streaming giant is gearing up to drop the official prequel of Games of Throne, titled House of the Dragon. Well, if you are a fan wandering around the Internet to know the House of the Dragon release date, it seems you ended up at the right stop.

After hustling through several online forums and squeezing out information from different sources, Sassyshows has got its hands on some sizzling leaks on House of the Dragon. So, without any further ado, let’s dive into it.

House of the Dragon Latest Updates!!

We have witnessed a storm of prequels going in and out. However, none could justify the conclusion of Game of Thrones. But finally, we are heading towards something grander as the House of the Dragon is gearing up to boom our screens.

The arrival of House of the Dragon will make the intentions of the creators crystal clear. It will portray a clear picture of the story’s tone and what are we heading towards. We already know that Game of Thrones is a big mystery. There are tons of elements that are solely unknown to us.

Though the hype for HBO’s upcoming series is immense and the fans are craving to know the House of Dragon release date, many believe that the new show will not create a buzz like its predecessor.

However, when the media threw this question to Martin, see what he revealed. In an interview, he quoted, “Anticipate away. I do not think the fans will be disappointed. It’s dark, it’s visceral, it’s really powerful… just the way I like my epic fantasy.” He further showered positive words on the show revealing that the creators have included some elements which were never seen before.

So, it’s pretty clear that something huge will be crashing soon. If you are a fan, curious to know House of the Dragon release date and other updates. Here is everything we have got for you.

House of the Dragon Release Date – When Will The New Series Drop?

Though there is an immense hype for House of the Dragon, the officials had not yet revealed the exact release date of the series. However, the latest trailer points out that the show will start dropping its latest episodes in 2022.

Considering the fact that post-production work is running at a high pace, we can expect new episodes of House of the Dragon to drop in the second half of 2022.

Yes, you heard it right. It may take a few more months for the production team to deliver the latest episodes, considering that the filming of House of the Dragon was started in the past spring. Moreover, due to the covid-19 pandemic the schedules were interrupted. So, if it’s pretty obvious that we will not get the series on our screens before the second half of 2022.

House of the Dragon Cast – Who Will Be In The New Show?

As of now, the officials have not revealed the entire cast list of House of Dragon. However, the latest trailer reveals five characters who will surely be a part of the series.

Apart from these characters (actors), House of the Dragon will include more stars like –

House of the Dragon Spoilers – What Will Happen?

As of now, we don’t have any solid evidence about the complete plot of House of the Dragon. However, in a recent interview, Sapochnik passed some sneak peeks of the series.

Sapochinik revealed, “I think we were very respectful of what the original show is. It was not broken so we are not trying to reinvent the wheel. House of the Dragon has its own tone that will evolve and emerge over the course of time. But, first, it’s very crucial to pay respects and homage to the original show, which was incredibly groundbreaking. We are standing on the shoulders of that show and we are only here because of that series.”

House of the Dragon Trailer – Is There Any Trailer or Teaser?

The good news is we have both. The officials dropped a super-thrilling teaser of House of the Dragon followed by an explosive trailer. You can also take a look at the teaser below –

Where To Watch House of the Dragon Series?

House of the Dragon is an exclusive HBO series. Therefore, it will be available for all the HBO Max subscription holders. So, what are you waiting for? Go grab your subscription.

Tell us what you think about the new HBO show? Now that you know the House of the Dragon release date, make sure to clear your schedules and enjoy the latest episodes.

Follow us for more interesting updates on all upcoming series and movies. Also, bookmark our page so that you don’t miss out on any updates in the future. Happy Watching!!