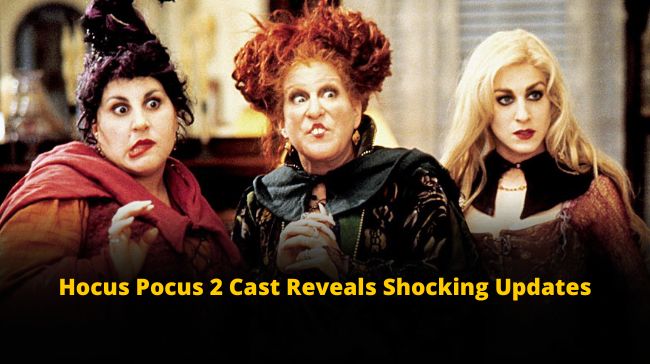 Hocus Pocus 2 cast is gearing up to deliver something unexpected in the sequel. The stars are continuously teasing an explosive comeback. Here are all the latest updates on Hocus Pocus 2.

According to a production source, Bette Midler, Sarah Jessica Parker, and Kathy Najimy will return for the anticipated Disney+ sequel. For the returning cast, no time has passed.

In the original 1993 family favorite, Midler, Parker, and Najimy portrayed three sister witches who strove to remain young by feeding off the energy of little children.

Despite earning mixed reviews upon its first release, the film was rediscovered by new audiences after multiple airings on Disney Channel and Freeform.

In the sequel, which will be published at the end of 2022, the Hocus Pocus 2 Cast includes Bette Midler, Sarah Jessica Parker, and Kathy Najimy will reprise their roles as Winifred, Sarah, and Mary Sanderson, respectively.

We had to wait until May 2021 for confirmation that the three would reprise their roles as the witchy trio, but a Hocus Pocus 2 Cast wouldn’t be complete without them.

Thora Birch will not be resuming her role as Dani Dennison since she had to decline a job due to schedule difficulties.

“Everybody worked so hard to make it happen,” she stated in May 2022, “and it simply didn’t happen.”

We’re still waiting to hear whether Omri Katz and Vinessa Shaw will return as Max and Allison.

Katz responded to whether the original cast members will return in March 2022: “After speaking with a number of fans, it’s evident that they are disappointed with our lack of engagement. However, I may be misleading you. We’re all on the same team! No, maybe we aren’t. Maybe we are!”

We know that Sam Richardson from Veep will feature in the sequel, but we don’t know who he’ll play. He’s been kidding about how much he enjoys Hocus Pocus as much as the rest of us.

Hocus Pocus 2 Cast will include various new characters in addition to the Sanderson sisters’ return.

The Sanderson sisters will be revived 29 years after their night of terror in Salem in the Disney+ sequel. Two young girls will ignite the Black Flame Candle, which is made from the fat of a hanged man, to summon the three witches back, as per the notion.

While Winifred, Sarah, and Mary Sanderson will be played by Bette Middler, Sarah Jessica Parker, and Kathy Najimy, respectively, the new characters have remained a mystery to the public.

Specifically, little is known about comedian Sam Richardson’s role, described as a mysterious unannounced position despite a brief appearance in the teaser.

In an interview with The New Yorker, Richardson, who portrays Veep on TV, remained tight-lipped about his part in the witchy sequel, fearing being placed on “Disney’s shit list for time everlasting.”

Richardson, on the other hand, who was a big fan of the original 1993 film, spoke on how “surreal” it felt to work with the trio of female comedians.

He remarked, “I can say that I got to shoot a lot of moments with the ladies.” “Seeing them perform those parts up close and then engaging with them was a really fantastic and thrilling experience for me as a fan of all three of them who grew up watching that movie.”

So, fans, are you excited to see Hocus Pocus 2 cast back in action? Tell us in the comment box.