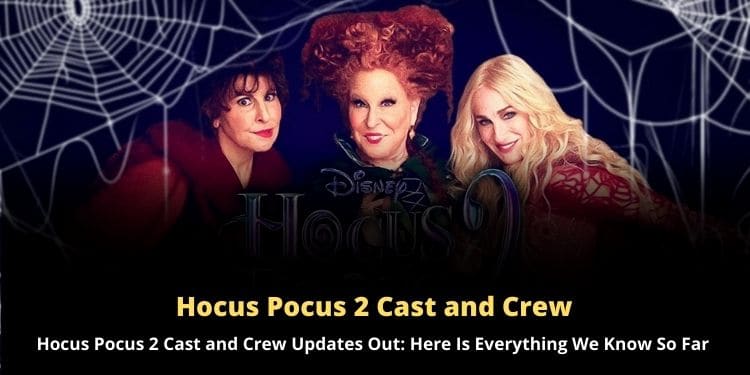 Fans who love to dive into the essence of the 90s, get ready for a thrilling experience as Hocus Pocus 2 is on the way to our screens. Here are all the fresh updates on Hocus Pocus 2 cast and crew.

Get ready for a grand reboot of the nostalgic Halloween Flick, Hocus Pocus as Disney+ is weaving a new project featuring Sanderson Sisters. While it’s been a long, the sequel was announced, the fans are hunting for the release date and more information on Hocus Pocus 2 cast and crew.

So, Sassyshows has got its hands on some fresh updates. Therefore, make sure to read the complete article.

Hocus Pocus 2 Release Date – When Will It Drop?

Unfortunately, the official release date of Hocus Pocus 2 is still under the wraps. However, Disney+ has confirmed that the sequel will be dropping in Autumn 2022.

Moreover, Midler also tweeted, “Sistaaaaahs! It’s been 300 years… But we are Back! Hocus Pocus2 arrives Fall 2022.”

So, as per our sources, Hocus Pocus 2 will be debuting around Halloween, i.eOctober 2022.

Hocus Pocus 2 Cast and Crew – Who Will Be In?

Back in October 2020, Mette Midler had confirmed that she will be back with Hocus Pocus 2 in 2022. Apart from her, Sarah Jessica Parker and Kathy Namjimy will be joining for the sequel too.

As per the recent leaks floating around the Internet, popular RuPaul’s Drag Race star, Ginger Minj has reportedly boarded in for Hocus Pocus 2 to play the role of Drag Winifred Sanderson, Thora Birch.

As of now, we don’t have more updates on Hocus Pocus 2 cast and crew. But make sure to stay tuned as we will be bringing Hocus Pocus 2 release date soon.

1 thought on “Hocus Pocus 2 Cast and Crew Updates Out: Here Is Everything We Know So Far ”