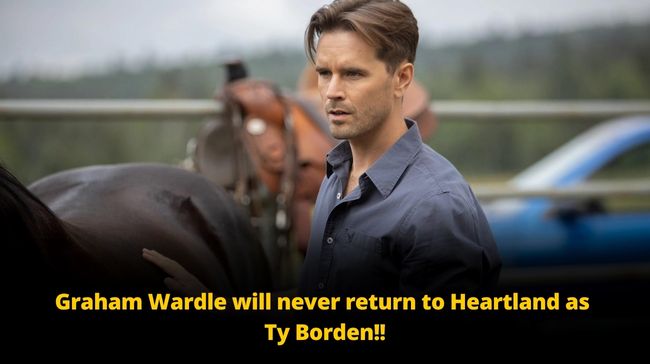 So, fans, finally the much-awaited part of Heartland, Season 16 is gearing up for a debut. While the viewers are expecting the return of their favorite character Ty Borden, the actor passed a shocking update on his return. So, will Graham Wardle return as Ty in Heartland Season 16? Here is all we know so far…

The Most Traumatic Death Of Heartland!!

If you are a Heartland fan and we ask you which is the most traumatic death on TV that you are still trying to recover from? We bet a single name will strike your mind and it’s none other than Ty Borden.

In Season 14 of Heartland, we witnessed the demise of one of the main characters of the show. Ty Borden was killed off as if it was nothing!! The move came from Graham Wardle, the actor who plays the part of Ty. But why? Why did he leave Heartland and will he return to Heartland Season 16? Here is all you need to know…

The Unexpected Exit Of Graham Wardle!!

Graham Wardle who was playing the role of Ty Borden decided to move on with life. He was playing the part of Ty almost since his teenage years, which caused him the desire to move on and explore other things or characters in his career.

It turned out that Graham was wanting to have a spiritual podcast, which he did, and treat Heartland as a memory for the rest of his life. Though Wardle left Heartland within a blink of an eye, it was not so easy for the fans to digest his exit. The show took a really long time to recover and fill the vacant space created by Ty.

Moreover, Ty Borden’s exit pushed back the ratings of the show and the latest season of Heartland got mixed ratings from the critics and the viewers. But, the fans are still craving to know – will Ty Borden return in Heartland Season 16? Here is what Graham Wardle revealed!!

There are only a few months left until the new season of Heartland comes out. While as per the spoilers many more shocks are on the cards for the fans, they are still craving Ty Borden’s return. However, actor Graham Wardle has openly revealed that he won’t be returning as Ty Borden in the Heartland franchise anytime soon. So, fans, we know it’s bad news, but we must appreciate his decision and move on with the new surprises coming up!!

So, guys, are you excited about Heartland’s new season? Tell us in the comment box!! Happy reading!!