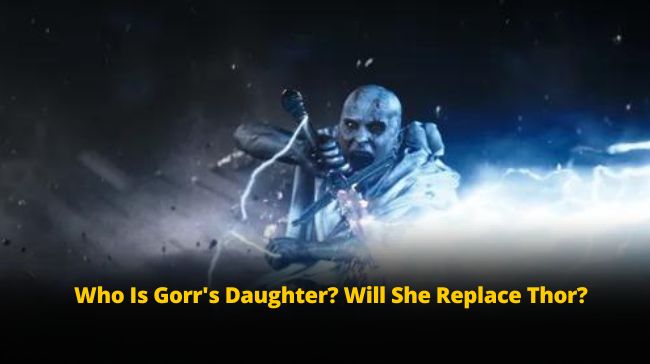 MCU’s new movie has just hit the theaters and received a tremendous response. People went crazy after watching their long-lost hero back on the big screen. Thor: Love and Thunder have given us the story of Thor and the villain popularly known as “Gorr: The God Butcher”.

The movie starts with the scene where Gorr’s daughter is lying in his hands, dead because of some terrible steps taken by a God.

In the fire of Vengeance, Gorr killed that God using the Necrosword who chose him and made him swear to kill each God present in this Universe. Inspired by this, Gorr went on a killing spree of Gods! The excitement level in fans went off the charts after acknowledging this.

However, the climax of Thor Love and Thunder brought back Gorr’s daughter. So, who is Gorr’s daughter, actually? Does she have a presence in the comics? What’s Marvel planning with the character? Here is all we know…

Thor and his mystical Journey with the Guardians of the Galaxy:

Thor was seen by fans last in the Endgame. Since then, his whereabouts were not shown. In the climax of Endgame, Thor left with the crazy family of Guardians of the Galaxy in search of himself. However, after knowing about the Gorr killing spree of Gods, he was forced to leave Guardians to make his team stop Gorr.

Throughout his journey, he unites with his ex-girlfriend, Jane Foster, who now wields the Mjolnir to delay her death because of deadly cancer. The couple fights through the selfish Gods and shadow monsters with Valkyrie and Korg on their side. Gorr’s ultimate mission was to reach the pool of eternity and kill all the Gods at once, fulfilling the purpose of Necrosword.

To stop him, Thor and his teammates fought side by side on the battlefield of Shadow Realm; ultimately, in the end, Jane sacrificed herself to save Thor, who in turn was ready to die and embrace her.

Inspired by their love, Gorr was very much moved in heart and the climax; instead of choosing the death wish for Gods, he wished for the resurrection of her dead daughter.

He asked Thor to look after her after his death because of the Necro curse. Gorr’s daughter’s character is somewhat new in the MCU as there is hardly anything about her in the comics.

However, fans believe that her role might have some great significance as the “Love” part has played an essential role in her story.

In the end, the role of Gorr’s Daughter is still not over as Thor now adopts her, and both of them have developed a bond. Months after the death of Gorr, both of them were spotted on a different planet fighting against the monsters showing the level of bondage they have built.

Fans were also excited after knowing this, especially about the Gorr, daughter whose role is played by India Rose Hemsworth, the natural daughter of Chris Hemsworth himself.

The story of father and daughter has ignited a wave of love through their picture and has become the top loving actor, and actress among the fans! Stay tuned guys!

Read More – How Powerful Is Gorr the God Butcher Sword?