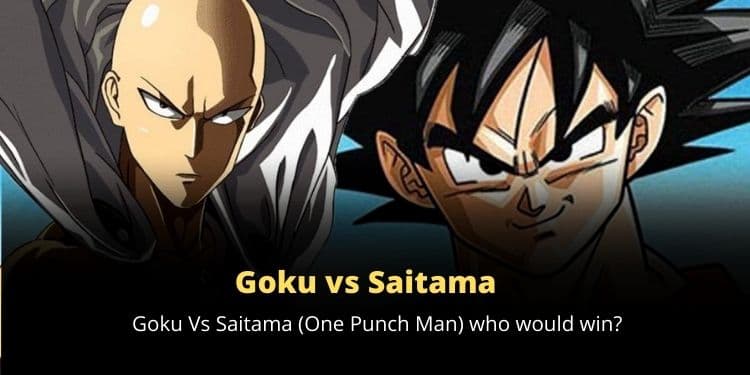 Goku Vs Saitama (One Punch Man) who would win?

Every Dragon ball fan will ask the same question Will he beat Goku? When a new character claims his spot for the strongest character. Lately, there has been a strong heated debate between dragon ball fans and One Punch Man.

One Punch man admirers think Saitama can beat Goku without sweating out a drop and vice versa for the Dragon Ball fans. But let us see in detail who would win if the two of the strongest characters in anime came face to face in battle.

Saitama from One Punch Man

Saitama is the protagonist of the anime series One punch man. As the name suggests, Saitaims defeats his opponents only through a single clear punch blow. He has faced the mighty foes and made them see defeat in just a punch. Saitama has trained so hard that his inner strength limiter has been broken, meaning even if he does not train for a decade, still his power level will continue to grow.

Saitama has never been overwhelmed in a battle scene, and once, he has fought with a meteor and destroyed it in a single blow. Saitama is not only just strong, but he has a keen eye for the opponent’s movements. He can only track down your next moves and agendas by looking at you. So it won’t be easy to face Saitama for Goku in Goku vs Saitama.

Goku is one of the most famous characters in the Anime world and the lead in the Dragon Ball series. Goku has many tricks up his sleeves, making him one of the strongest and powerful in the anime world. But can Goku beat Saitama?

Goku can transform into Super Saiyan forms due to his Warrior kind genes and can fuse with others to sharpen and add to his fighting skill set. But this is just the tip of the ocean.

Goku has defeated many unformidable foes, and now he is amongst the most powerful in all of the 11 Universes of Dragon Ball. Still, Saitama will be a threat for Goku in Goku vs Saitama.

Saitama is super strong and fast, but can he land his infamous punch on Goku and defeat him? The answer is not that simple. Both are best from their anime universes, and the fight, Goku vs Saitama, will last long.

Goku is super fast in terms of speed, and he has a great battle IQ, so he will not let Saitama punch him and choose to dodge his attacks. On the other hand, Saitama needs a single hit, but he has to make sure he does not come in Goku’s Kamehameha. Else he is a goner.

Saitama can read Goku’s attacks and plan for his, which gives him the upper edge in the fight, but once Goku goes into the Ultra Instinct, it is over for One Punch guy. Goku’s never-give-up attribute will help him in his fights, and as we all have seen in the past, the more powerful opponent Goku will gain more powers by his undying will and determination.

So There will be a winner after a long fight in Goku vs Saitama, and it will be GOKU.

That was our take on the controversial fight between the most popular and strongest character in the anime world. Let us know who will come on top in the battle and why? Let us know your predictions of the fight in the comment section.

2 thoughts on “Goku Vs Saitama (One Punch Man) who would win?”