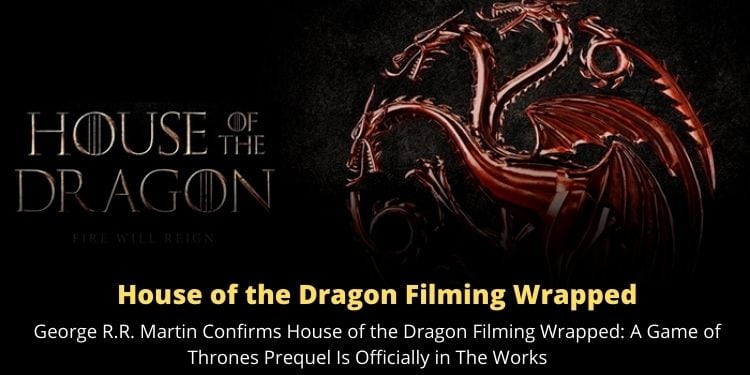 Finally, the shooting work of House of the Dragon has been wrapped. So, here are some exciting updates on the upcoming prequel.

It’s been a long time coming, but House of the Dragon has finally wrapped filming. George R.R. Martin took to his blog to make the announcement, confirming that HBO’s Game of Thrones prequel series is officially in the works.

The author also gave fans a little teaser for what they can expect from the new show. While we continue to wait for Martin’s final two books in A Song of Ice and Fire, House of the Dragon is sure to tide us over!

Series is planned as a sequel to A Game of Thrones

While a couple of characters were added to the Game of Thrones cast in season 5, like Ros and Ser Meryn Trant, it was unknown what role they would play. That is until the author’s blog confirmed that they would be appearing in the prequel series.

He explained, “This series is planned as a sequel to A Game of Thrones, taking place thousands of years before the events depicted in A Song of Ice and Fire. In this prequel—and I’ve made up some names for it—the Targaryens will be part of an exiled House struggling for power.”

House of the Dragon Filming Wrapped

“The story begins thousands of years ago, in a far-off place called Westeros. The Targaryens are one of the Great Houses of prehistory, but they’ve been defeated by an enemy they cannot overcome and are struggling to survive.

A charismatic young man named Daario Naharis emerges as the leader of an underground resistance movement to restore the House’s glory.”

Robin Hobb, author of the Farseer Trilogy (Assassin’s Apprentice, Queen of Sorcery and Golden Fool) also chimed in on Twitter, tweeting “When I saw that George R.R.

House of the Dragon’s success could determine how much longer we have to wait for more Game of Thrones on HBO Max.

The reaction from fans following last night’s season 8 conclusion was predominantly negative, but fortunately it seems like House of Draco may be worthy enough in quality that they will produce another installment should there ever need arise!