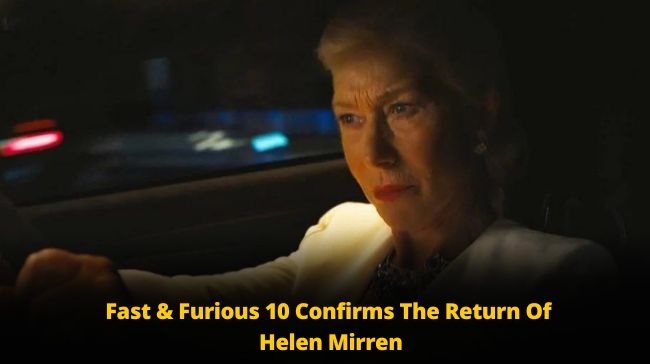 Helen Mirren is returning as Magdalene “Queenie” Shaw in Fast & Furious 10. Check out the new photos directly from the set.

A brand new viral photo confirms that Helen Mirren will return as Queenie in Fast & Furious 10. She debuted in The Fate of the Furious in 2017 and continued in Hobbs & Shaw and F9 last year.

Louis Leterrier is directing the next street-racing movie in the franchise, which is currently in production. During the two-part finale of Fast X, the 10th chapter will serve as the first in a series of films.

As part of the new additions to the franchise, Brie Larson will play an undisclosed character, Rita Moreno will play Dominic Toretto’s grandmother, and Jason Momoa will play a villain that has yet to be identified.

Until now, details regarding the plot of Fast X have been kept under wraps. However, it seems the movie’s main plot will revolve around Charlize Theron’s return as Cipher, the villain in the movie.

Digital Spy has obtained photos of Mirren on the set of Fast & Furious 10 as Magdalene “Queenie” Shaw. At the Castel Sant’Angelo in Rome, Mirren can be seen filming alongside Diesel.

As seen in the photos, Mirren and Diesel’s Dom embrace, and Mirren strokes Diesel’s cheek. While most of the previous Fast & Furious ensemble was expected to return, nothing has been confirmed on Mirren’s Queenie until now.

Mirren is an important part of the franchise

Given that Mirren will be returning as Queenie, it’s safe to assume that her character will have a significant role to play in the sequel. It is only to be hoped after F9.

Mirren only had a small part in last year’s blockbuster film, despite her big role as mother to two of the film’s biggest villains. Queenie helped Dom track down his brother Jakob (John Cena), and it looks like he’ll once again turn to her for help in Fast X.

Well, it will be great to see another onscreen reunion for Mirren and Diesel, who has been open about their love.

Fast & Furious 10 looks like it’s going to have a great cast of returning players as well as some new faces.

Fast X will be an emotional ride with plenty of callbacks to previous movies since it’s the first part of a two-part finale. Maybe Queenie’s return in the movie suggests deeper connections with her sons, Owen and Deckard (Luke Evans).

In light of the continuing production and the frequent announcement of new cast members, anything seems possible.

There will soon be more information available about what fans can expect from Fast & Furious 10, as well as the presence of Helen Mirren in the franchise’s next volume.

Do not worry; we will keep you posted. Until then, stay tuned!