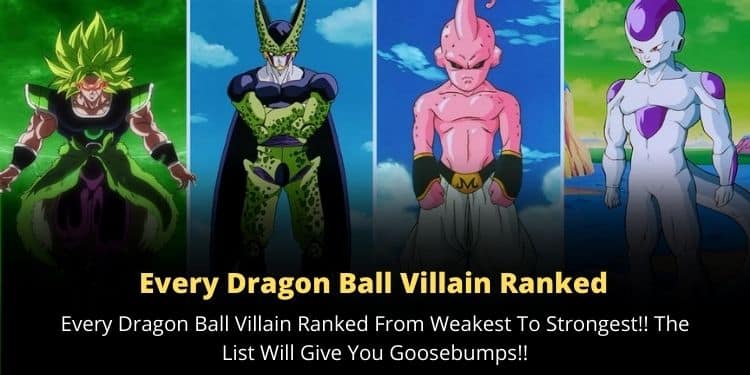 Dragon Ball is all about fights. It’s a roller coaster ride witnessing our favorite character unleashing new forms to save guard the world. We have seen the Z-fights, specifically, Goku fighting with tons of Dragon Ball villains.

Though the show majorly focuses on the Z-fights, the ingredients that add up the thrill and drama to the plot are the villains. With every new series, the creators drop a new exciting villain, or sometimes the old ones make a comeback with more power.

Villains are the most crucial elements of an action-packed anime story and thankfully, the Dragon Ball franchise has introduced the best villains in pop culture. So, today in this article, Sassyshows has ranked all the major Dragon Ball villains from weakest to strongest.

With every new series, Dragon Ball continues to introduce new scarier villains against our favorite heroes. As the Z-warriors are unlocking new levels of powers, the plot is pitting in new foes, who are stronger.

Running over 500 episodes, Dragon Ball has come up with a huge array of insane villains. As Goku and his team climb the ladder of power, the villains too go up in terms of strength.

Though Raditz was the eldest son of Bardock and the biological brother of one of the strongest Saiyans in the universe, Goku, his powers did not even come to Super Saiyans. However, he still manages to leave a mark as one of the scariest Dragon Ball villains.

His entry into the franchise led to the kick start of the Dragon Ball Z series. Raditz came, he saw, and he conquered the world. Though he comes down to being one of the weakest villains, we ever had in the Dragon Ball franchise, at that point in time, Goku had to sacrifice his own life to save the world from his own brother.

In the early Dragon Ball days, King Piccolo turned out to be one of the major threats for the Z-warriors. The original King Piccolo possesses many similarities to the future deadly villains such as Freiza and more.

Initially introduced as one of the most threatening evils, King Piccolo went on a rampage eliminating the more powerful beings on Earth and his sole aim was to conquer the world.

However, with the rise of new antagonists coming up with new powers the popularity of King Piccolo as a major Dragon Ball villain got overshadowed.

Nappa’s first entry in Dragon Ball was something epic for the fans. After Raditz’s death, Vegeta and Nappa took over his mission and attacked Goku and other Z-Warriors.

With a huge muscular body, Nappa showcased insane physical abilities. He killed two of the most proficient fighters on Earth named Tien and Chiaotzu, at that point in time. However, when Goku steps into the scene, he showcases his new abilities and blows away Nappa within seconds.

Toriyama added a pinch of humor within the Dragon Ball plot introducing a group of deadly as well as hilarious Dragon ball villains.

With a legendary reputation, Guldo, Jeice, Burter, Captain Ginyu, and Recoome stepped into the scene as some major antagonists in the series. However, their way of fighting and showcasing some dancing moves was pretty hilarious.

Though they unleashed immense powers, Goku teamed up with Vegeta and Gohan to defeat them pretty easily.

Turles was not only a replication of Goku in terms of looks, he was only immensely powerful. He appears as the main antagonist in the Dragon Ball movie, The Tree of Might. However, the popularity of this Dragon Ball villain was boosted with the Dragon Ball Xenoverse video games.

Turles was introduced as one of the strongest Saiyan Elites, who had a wide arsenal of attacks under his belt. His Great Ape form was really deadly. However, Turles was much weaker than Lord Slug.

If you are a Dragon Ball fan, one evil character that must have fascinated you would be King Cold. After Frieza’s death, the complete family of Frieza including King Cold, lands on the Earth to seek his revenge.

Though King Cold showcased impressive power levels and swordsmanship, Trunks ultimately defeats him single-handedly. The worst part is Trunks did not even give a chance to King Cold to showcase his transformation.

Meta-Cooler was the mass-produced army of Cooler, who was Frieza’s brother. Meta-Cooler was incredibly powerful, and they even obliterated Goku’s Super Saiyan form.

At that point in time, Goku’s Super Saiyan form was the most powerful transformation in this arsenal. However, Goku and Vegeta together managed to defeat Meta-Cooler.

The addition of the Androids in the Dragon Ball franchise was something explosive for the fans. For the first time we saw Future Trunks in the Androids Saga. Trunks traveled to Goku and Vegeta’s timeline to warn them about the Androids.

The first Android to jump into the scene was Android 19 and Android 20. While Goku’s pre-existing heart issues barred his powers, Vegeta and Piccolo managed to overpower the androids.

However, then arrived the two strongest Androids, Android 17 and 18. They killed their own creator Dr. Gero and almost overpowered Super Saiyan Vegeta and Trunks.

While Cell is not as popular as the other main Dragon Ball villains like Frieza and Buu, he was one of the most powerful antagonists in Dragon Ball Z. Created using the DNA of the Z-fighters; he possessed insane abilities.

At this point in time, Perfect Cell built a wide arsenal of moves like generating insanely strong junior cells and more. He was so powerful that it compelled Gohan to push his energy levels to Super Saiyan 2 to overshadow his abilities and kill him.

We saw the sacrifice of Goku during the Cell games. However, Bojack stepped into the scene after Goku’s exit from Earth. So, this compelled Gohan to jump in as the main protagonist against Bojack, a deadly Dragon Ball villain.

Bojack showcased insane raw strength, and he even encountered one of his teammates out of rage. His appearance was much similar to Hulk and with incredible power he even defeated Super Saiyan 2 Gohan.

We all know that Broly is one of the strongest characters in the Dragon Ball franchise. However, it’s still unclear whether Bio-Broly is as strong as his human counterpart or not. Bio-Broly eventually appeared to be a deadly, mindless zombie-like creature who only craves to erase off his opponents.

Backed with the incredible power of Broly, it took a joint effort of Goku, Gohan, and Goten to launch the Family Kamehameha to defeat Bio-Broly.

The Dragon Ball Fusion Reborn movie introduced the villain, Janemba. He was considered as one of the major Dragon Ball villains, who comes from the world of darkness. Even the Kais believed that Janemba was an embodiment of evil.

Janemba finally revealed his Super Janemba form which skyrocketed his abilities. So, it took Goku and Vegeta to fuse together into Gogeta to overpower Super Janemba.

The Dragon Ball film, Wrath of the Dragon puts Goku and his team against a major villain from the past. Though the Z-fighters are now even stronger, they face the true power of Hirudegarn.

Hirudegran came up with a bunch full of moves and powerful attacks. His powers were so impactful that even Goku’s Super Saiyan 3 form could not resist them. The entry of Hirudegarn was a big threat for the Z-fighters as at this point in time, they could not even transform.

Dabura was the major Dragon ball villain introduced in the Buu Saga. He was the demon king who worked on the instructions of his master evil Bobbidi. The franchise revealed that Dabura was the strongest being from the demon realm.

He has a bag full of incredible abilities, and a heart loaded with evilness. Even his spit possessed the power to turn anyone into a stone statue. However, his powers were incomparable to that of Majin Buu as the latter defeated him within seconds turning him into a chocolate cookie.

Kid Buu is often quoted as the strongest Dragon Ball villain. He is the best example of a pure evil who showcases all types of notorious activities. Kid Buu possessed the powers to turn anything and everything into ashes within seconds.

However, after absorbing the Kais, he turned into a pink fat creature.

Frieza is one of the oldest as well as popular Dragon Ball villains. Though he has experienced multiple defeats from the Z-Warriors, the fire of revenge in him drags him again into the scene.

However, every time he comes against the Z-fighters, we can expect a new bomb to drop. When Frieza arrived on Earth for the second time, he brought a new transformation in his bucket. Though Frieza’s new Golden Frieza form was impressive enough, Goku has his new Super Saiyan Blue form which allowed him to defeat the villain much more easily.

Introduced in Dragon Ball Super, Goku Black was a variant of Zamasu from an unaltered main timeline of Dragon Ball. Zamasu managed to kill the Goku of that timeline and steal his Saiyan body which elevated his powers.

With Goku’s body, Zamusa had access to the Kai’s as well as the Saiyan abilities. This made him much stronger and instilled a huge arsenal of attacks under his belt. He also showcased a new Saiyan form named Super Saiyan Rose, which gave him access to insane strength and powers.

The Super Saiyan Rose form was so powerful that it helped him take down Goku and Vegeta, even in their Super Saiyan Blue form.

Fused Zamasu’s powers were so incredible that Goku and Vegeta could not stand against him even for a minute. Not even Vegeto’s Super Saiyan Blue form could put him down. However, here Zen-Oh, the strongest being in the multiverse came into the scene and erased the existence of Fused Zamasu.

Beerus, the God of Destruction of Universe 7 was one of the finest foes of Goku, at the start of Dragon Ball Super. Though Beerus eventually turned to the good side, his first appearance in the show was something deadly from the Z-warriors.

Within a blink of an eye, Beerus defeated Super Saiyan 3 Goku and even Vegeta with all his power could not even deliver a blow on his body. Though Goku in his Super Saiyan God form gave good competition to Beerus, the God of Destruction eventually defeated the Saiyan.

Moreover, as per Whis, to defeat Goku’s Super Saiyan God form, Lord Beerus did not even unleash 20% of his actual powers.

Jiren was one of the most mysterious characters in the Dragon Ball franchise. Though he is not actually a Dragon Ball villain, Goku faced him in the Tournament of Power arc.

Jiren was the strongest fighter in Universe 11 and he even defeated the God of Destruction of his Universe. With a huge arsenal of attacks, Jiren even countered Goku’s Spirit bomb move.

Jiren was the one who compelled Goku to unlock his Ultra Instinct form and even after that, Goku needed the assistance of Golden Frieza and Android 17 to defeat Jiren.

Q1) Who Is The Strongest Villain In Dragon Ball?

Ans – Kid Buu is often quoted as the strongest villain in Dragon Ball.

Q2) Who Is The Weakest Dragon Ball Villain?

Q3) Which Villain Is Stronger Than Goku?

Ans – Broly was one of the Dragon Ball antagonists who was even stronger than Goku at that point in time.

Q4) Who Is The Strongest In Dragon Ball?

Ans – As per Dragon Ball Super manga, Quitela once defeated Lord Beerus in an arm-wrestling challenge.

So, here is the complete list of all Dragon Ball villains, ranked from weakest to strongest. We hope you enjoyed reading the article. Make sure to follow us for more interesting articles. Also, drop your views in the comment box, on who according to you is the strongest Dragon Ball villain?

2 thoughts on “Every Dragon Ball Villain Ranked From Weakest To Strongest!! The List Will Give You Goosebumps!!”