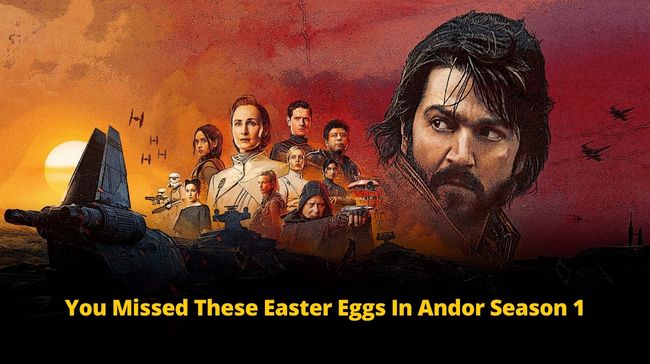 Let us know this time about the new recently released series Andor!

Is Andor a prequel to Rogue One?

Cassian ANDOR, played by Diego Luna, is a thief whose planet was destroyed by the Empire. The beginning of the series is all about the self-exploration journey of Andor, who, as a “revolution-averse,” is not going to give himself to save the galaxy as we see in Rogue One.

All About Diego Luna – the character from Andor Season 1

The actor was born on December 29, 1979, and is 42 years old. The Mexican actor is quite known for childhood telenovela work. He also starred in Frida and Before Night Falls.

The series covers a lot of Star Wars Universe eras, and thus, we are here to share with you today some Andor Sear 1 Easter eggs that you might have missed!!

Stars Wars have featured a ton of iconic ships, but some of them are show stealers. A few glimpses of such iconic ones as Ferrix, Y-Wing Starfighter, and a T-47 airspeeder are not to miss moments in the Andor season 1 episode.

The Andor Season 1 is a clear outcome of the inspiration from the first original Star Wars films that depicted old-school tech. The show embraces the feel of Ralph McQuarrie’s original concept art, similar to the Aesthetics of ‘The Mandalorian.’

Oh Not To Forget – The Separatist Sigil:

During a violent confrontation with the passengers, a familiar blue and white hexagon logo is depicted on their uniform, similar to the Separatist Alliance symbol during Clone Wars.

Did You See The Hidden Rebel Alliance Logo???

The Separatist Alliance logo is not the only familiar thing!! Also, when the jealous shopkeeper decides to call the police on Cassian, the booth from where he makes the call has a red crescent logo that is very much similar to the Rebel Alliance Logo!

These are the few Easter eggs from Andor Season 1. Do you want to add any more to the list? Follow us for more such updates!!