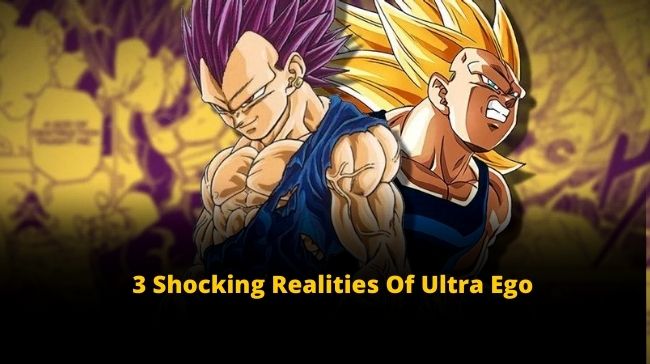 Vegeta’s competitive attitude towards Goku and his obsession with power pushed him to the doors of the God of Destruction. Under Lord Beerus’ training, Vegeta has achieved a new powerup – Ultra Ego in the Dragon Ball Super Manga.

Though Ultra Ego brought some super destructive abilities in Vegeta, much like Goku’s Kaioken form, it too has some ill effects on the users. So, today, Sassyshows is here to point out the ridiculous side of Vegeta’s new form, Ultra Ego.

While Goku impressed the fans with his Ultra Instinct form in Dragon Ball Super Season 1, we are pretty sure Vegeta’s new form Ultra Ego will break the Internet. Vegeta is one of the most loved Dragon Ball characters who is famous for his powerful attitude and Saiyan pride.

While for an extended period of the show, we have seen Vegeta chasing Goku in terms of power, it seems for the first time in Dragon Ball history, Vegeta has finally surpassed Goku with his new form.

Vegeta has set his way to the throne of the God of Destruction as he is slowly and steadily adopting the mannerism of the Destroyer. But, as every coin has two sides, Vegeta’s new form has both evil and good sides. There are a bunch of setbacks in the form, which are listed below –

For every unique Dragon Ball transformation, we have seen rage playing the role of the trump card for years. Similarly, for Vegeta’s new form, rage is the fuel. The form builds up upon the user’s rage and it keeps on getting better with the increase in anger. Though we have seen Vegeta’s angry young attitude, to hold up his rage and the form may be difficult on various occasions.

It Stresses On The Attack Power

What makes a transformation complete or most powerful? A transformation is said to be perfect if it balances every aspect. Like in Ultra Instinct, we saw how Goku beautifully uses both his defensive and attacking skills to fight Jiren and the other fighters.

There Are No Stages For The Form