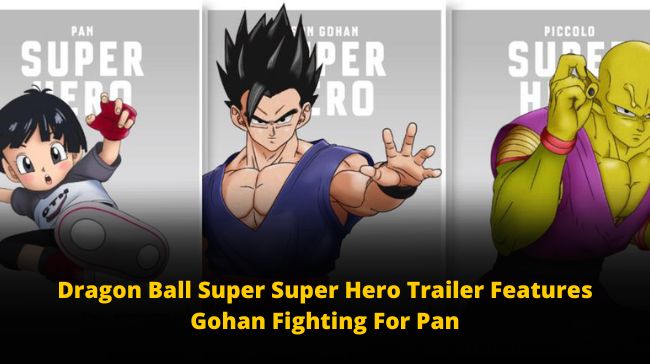 Another Dragon Ball Super Super Hero trailer has recently been published. The latest trailer or teaser for the next Dragon Ball film, which debuted just a few days ago, includes a few more views of the freshly powered-up Piccolo and the film’s new enemies, the android fighters Gamma 1 and 2, but largely focuses on Gohan and his daughter, Pan.

The video closes with a shot of Gohan and his daughter embracing after Gohan fights his way through some of the Red Ribbon Army’s jobbers and unleashes a deadly combo on Gamma 1. If you are curious to explore deeper into the new Dragon Ball Super Super Hero trailer, make sure to read the complete article.

Pan is reported to play a significant role in the upcoming film, which will mostly center on Gohan’s relationship with his original martial arts coach, Piccolo.

Pan is now old enough to attend school and has also formally begun her own martial arts training under her father’s Namekian master, as the film is set several years after the events of Dragon Ball Super: Broly.

To represent the film’s location in the series continuity, several other characters, most notably Goten, Trunks, and their combined form, Gotenks, have gotten new character designs.

What is Dragon Ball Super Super Hero release date? As the Japanese premiere date of June 11 approaches, Toei Animation has begun to release more and more promotional material for the film.

Super Hero was supposed to be published in April of last year, but it was postponed in early March when Toei Animation was hit by a targeted ransomware attack, which forced the company to postpone work on many of its largest projects for many weeks. Crunchyroll plans to release the film abroad later this summer.

All of the Dragon Ball anime series, from the original 1986 TV program through the 2017 version of Dragon Ball Super, are now accessible to view on Crunchyroll. The original manga by Akira Toriyama is also available in English.

Have you watched the latest Dragon Ball Super: Super Hero trailer? If yes, what are your expectations from the movie? Tell us in the comment box.