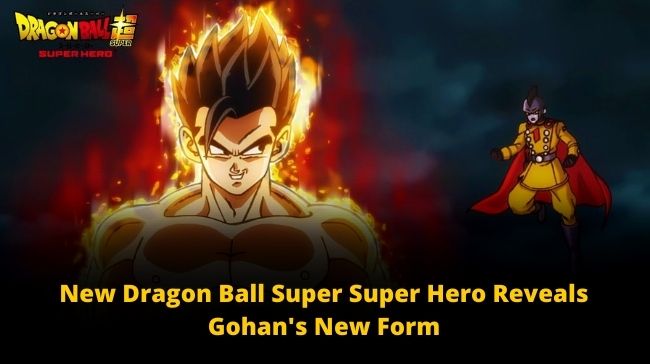 In the upcoming anime series, Goku’s son is first time visualized in his ultimate form, whereas on the other hand, we see a bunch of surprises.

The teaser is something that you have never seen before. Within the middle of all these things, Gohan’s new form has created new waves all over the internet.

The new form of the Gohan appeared to be the powerful combination of Super Saiyan 2 and unleashed forms.

So, it’s going to be super exciting to watch the new form of Gohan and how the creators use the character in Dragon Ball Super Super Hero.

As discussed, the Dragon Ball Super: Super Hero movie uncovered the new ad today, which is part 1 of the ad campaign.

The recent promo features unseen scenes that you didn’t see in the previous trailer. The noteworthy scenario shows the transition of Gohan’s new form from the previous one.

However, the scene shown in the ads may not be the same in the movie segment. But somehow, the movie scenes seem to be realistic and transformed.

This new ad trailer is considered the hallmark of the character Super Saiyan 2 which swirls around Gohan’s new form.

His hairstyling and look are entirely changed and overall visualized in an angry mood and demeanor as he looks in the scene of the Super Saiyan 2.

However, as for the Potential Unleashed, his only trademark shown in the upcoming series is the stunning white aura that surrounds the head of Gohan in a whole new way.

No matter how many transitions you see, it is worth seeing in the franchise of Dragon Ball.

After the trailer’s release, everyone was waiting for the release date. Good news for the fans of Dragon Ball Super: Super Hero has been confirmed, and this Japanese anime series will probably be in the theater on June 11, 2022.

Although there is no specific date announced to release the movie internationally, it is likely to be in August.

The movie will focus on Pan, Gohan, and Piccolo, and they will battle with the Red Ribbon Army’s Androids on Earth.

As shown in the trailer, Vegeta and Gohan will appear in the upcoming movie, and Broly will gain training with the entire group.

So, fans, are you excited to see Gohan’s new form? Tell us in the comment box.