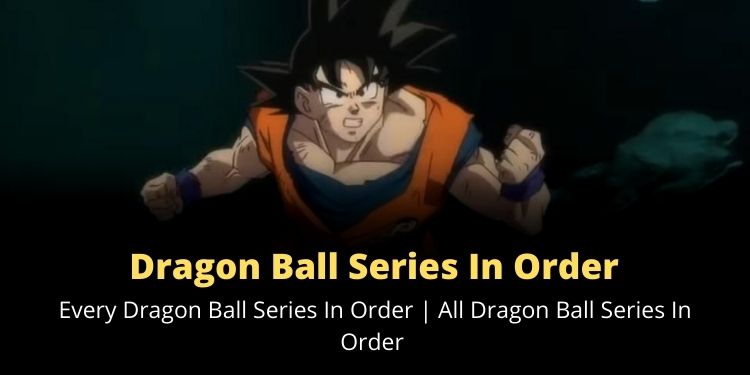 Dragon Ball has been one of the top anime franchises across the world. Running for around 30+ years, the franchise has delivered a bag full of super-entertaining series. However, if you are new to the anime, you may be a bit confused about the Dragon Ball series in order.

As the plot is beautifully designed by Akira Toriyama, watching the show in the correct order is important to get the true essence of the story.

So, here is your complete guide for watching all Dragon Ball series in order.

Dragon Ball is one of the most loved franchises in the anime world. It has a long storied history. Though some fans love to watch Dragon Ball Z and are stuck with the series only, there is much more to explore. Dragon Ball has an extensive wealth of content as it extends beyond Saiyans, deadly battles, and mind-boggling transformations.

With a wide range of deadly villains and other characters, the show is divided into multiple series to offer the viewers an edge of entertainment.

So, for the newcomers, hunting through the extensive library of content can be a bit tricky as most of them will be unaware of the right dragon ball series in order to watch the best parts.

The show initially debuted in 1986 with the Dragon Ball Original series, and after the immense popularity of the show, it delivered tons of spinoffs like Dragon Ball Z, Dragon Ball Super, and more.

Though the original manga comes under the title Dragon Ball, Toei Animation distributed it into different series to create a sense of hype and interest within the fanbase.

Not just that but the show tried its hands out into official sequels with the premiere of series like Dragon Ball GT.

Though Akira Toriyama is titled the anime magician who has created an insane series, “Dragon Ball”, without his involvement too, Toei Animation has managed to weave the best content for the viewers.

Initially, after Dragon Ball Z, the anime started losing its spark, and the games began to attract fans. With the entry of Battle of Gods and Dragon Ball Super in the scene, the franchise got back its charm, and these series turned out to be fan-favorite.

Apart from the core series, there are tons of TV specials that may confuse the newbies. So, we are here with the complete guide on how to watch all dragon ball series in order.

All Dragon Ball Series In Order

The method mentioned below is frowned upon by the true Dragon Ball fans, one good way to enjoy the true essence of the storyline is to watch all series and movies in chronological order in terms of time scale or premiere scale.

Note – This order does not take into account whether any series is titled canon or not. Meanwhile, we have included all the series coming from the Dragon Ball franchise. So, here is the Dragon Ball series in order –

How To Watch Dragon Ball Series In Canon Order?

If you don’t want to watch all the series and the movies that are not considered canon, make sure to check out the list below.

The list is prepared by skipping all the series and movies that have less to no connections with the official manga and are created without the intervention of Akira Toriyama.

If you are curious to know the dragon ball series correct order to watch, we have covered all the series in chronological order below –

Being free from awkward fillers or inconsistency in animation, the Dragon Ball original series truly adapted its six-story arc. The series took the audience to the depths of the main story, guided by the original manga created by Akira Toriyama.

Dragon Ball Z is simply a continuation in the story of the main Dragon Ball original series. The series debuted with its first episode just after the climax of its predecessor.

Though the series was initially titled under the name Dragon Ball, the creators rebranded the show, which pumped lifeblood into the anime in terms of budget, animation, and popularity.

Dragon Ball Z with the most flavorful characters and a bunch of super deadly villains got the attention of the viewers and turned out to be an instant hit.

With larger-than-life fight sequences, amazing transformations, Dragon Ball Z covered up the four arcs from the original manga with some commercial twists.

Though Akira Toriyama marked a beautiful climax of the Dragon Ball with the Buu Saga, Toei Animation wanted to try its hand on the show by milking it. Toei Animation released a sequel of the series titled “Dragon Ball GT”, which turned out to be a mess.

It was a major setback for the franchise as the series decreased the popularity of Dragon Ball. The fans showered their hate and troll on the series due to its roughly written content and unplanned execution of the plot.

Though the Dragon Ball GT series introduced some cool elements like Super Saiyan 4 transformation, it was ultimately a big flop for the franchise.

With a bunch of re-edited scenes, a new performance from the cast, and a lower episode count, the Dragon Ball Kai offered a reinterpretation of the Z’s story.

Most fans desired a bombastic sequel with the release of Dragon Ball Kai: The Final Chapters following its original DBZ Kai series. However, it led to a complete disappointment as the filler did not offer a clear vision and could be cut at times.

The episodes were pretty bloated and did not grab the audience’s attention.

With the decrease in popularity of the franchise, the Dragon Ball franchise needed a trump to create hype among the audience and Dragon Ball Super turned out to be the magical move. Debuting with the series, the franchise got huge recognition for its insane storyline and quality animation.

Though Dragon Ball Super marked its climax, Super Dragon Ball Heroes has kept the fans busy since 2018. The series tells a different story but it’s solely created to maintain the hype and for promotional purposes.

Here is are the Dragon Ball series ranked as per popularity –

Q1: Which Dragon Ball series should I watch first?

Q2: Should I watch DBZ Kai or Z

Q3: How to watch the Dragon Ball series in order?

Ans – Check out the complete article to know the chronological order and enjoy all the Dragon Ball series to ensure an edge of entertainment.

Q4: Is Dragon Ball Z and Kai the same?

Ans – Dragon Ball Kai is a modern and revised version of the original Dragon Ball Z, coming under the commemoration of Dragon Ball’s 20th and 25th anniversaries. Coming under Toei Animation, it debuted in April 2009.

Q5: How many versions of DBZ are there?

Q6: How many episodes are in all of the Dragon Ball series?

Ans – There are a total of 291 episodes in all of the Dragon Ball series.

Q7: Which are the must-watch series from Dragon Ball?

We have presented the complete guide to watching the Dragon Ball series in order. Hope the article will guide you to the best episodes and series and help you get an edge on entertainment. Share it with your friends and all Dragon Ball fans. Follow us for more valuable content.