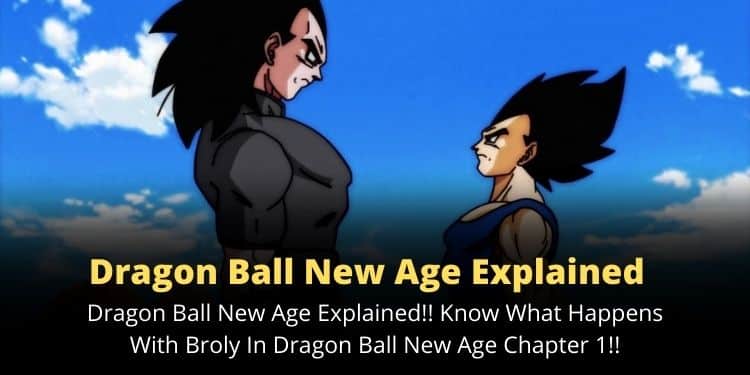 Dragon Ball franchise’s popularity touched new levels, and it marked the start of a new era in the world of anime. With a bunch of bombastic series, it opened the doors of a global audience to the anime world. It grabbed the attention of animation lovers and people started appreciating the insane work from the franchise.
While it produced tons of top-notch anime series revolving around the main characters like Goku, Gohan, Vegeta, and other Z-fighters, some series were utter flops. One such series was Dragon Ball GT, a series that received lots of hatred from the fans.
However, a few fans admired the artwork, while some liked the Super Saiyan 4 transformation. So, these fans were curious to know what happens after the Dragon Ball GT series. But, still, the hate comments against the series overshadowed the drops of popularity and the creators decided to drop the idea of continuing the story.
But we know that the fans of anime are really awesome. They created their own version continuing the story after Dragon Ball GT. They delivered a super awesome series named Dragon Ball New Age that marked the unofficial continuation of the series.
The fan-made series majorly dealt with the aftermath situations of Dragon Ball GT and introduced some mind-boggling events to entertain the true Dragon Ball lovers. So, what’s the story, and is there a Dragon Ball New Age Manga? Here is everything we know. 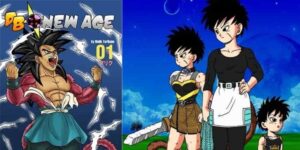 Malik has showcased his insane talent in crafting the most entertaining content to take the story to another level. In an interview, Malik revealed that he has been working on the project since 2001 and the incredible story and popularity of Dragon Ball Z greatly inspired him.
He was the one to publish Dragon Ball New Age Volume 1, and it was one of the first fan-made mangas at that time. Moreover, its popularity broke all boundaries, and it became the first Dragon Ball manga to be published in English outside Japan.
The audience praised Malik Torihane’s work, and the Internet was stormed with appreciation. Fans showered their good comments praising Malik for efficiently implementing Toriyama’s animation and art style.
He covered even the minutest aspects right from the muscular bodies of the characters to the movements and expressions in Dragon Ball New Age manga.

Dragon Ball New Age Manga elaborates the story of Mammad, Iron-Broly, and more Dragon Ball characters. The complete manga is divided into different arcs which are as follows –

The Return Of The Legends

The end of Majin Buu brought a tide of happiness on Earth. Everyone was happy at the destruction of a major threat. However, one of the Z-warriors, Vegeta, the Prince of Saiyans, rolled in the wave of jealousy as the one who defeated Buu was Goku aka Kakarot, his major rival.
The story of Dragon Ball New Age manga then shifts to the legendary Super Saiyan Broly. Dr. Bill, a scientist, locates the wounded body of Broly and he rescues him with the aim to use him as a threat.
Dr. Bill re-crafts the semi-destroyed body of Broly and arms him with his efficient technology giving him a similar appearance as an Android. Broly gets a new body with a new name Iron-Broly.

Though Broly got a new body, his intentions were clear right from his first appearance. He was eager to kill Kakarot. So, when Broly was completely revived and Dr. Bill tried to influence Broly. He shouted out – Kakarot. Things were pretty clear that Broly will not obey the evil Doctor.
So, he started his search for the Dragon Balls with the sole aim to influence and control one of the most powerful Saiyans, Broly.
Meanwhile, Broly started his hunt for Goku. The easiest thing he could be to attack the cities to draw the attention of the Z-fighters. The first superheroes who jumped into the scene were Gohan and Videl.
As the Dragon Ball New Age manga proceeds, we see Gohan indulging in a fight with Broly, or rather a new, improved version of Broly. Meanwhile, Videl reported the incident to Goku and the team. But before the strongest Saiyan, Goku, reached the scene his beloved son was crushed down.
This ignited insane rage and Goku jumped in to save Gohan. However, Broly’s incredible power was simply un-tolerable. He easily overpowered Goku and cut the Saiyans hand. However, later Vegeta came to the rescue.
While everyone was busy with Broly, Dende gathered the valuable information of Dr. Bill. So, all the other Z-warriors, including Gohan, Yamcha, and Krillin went after Dr. Bill.

The Battle With Prince of Saiyans

Meanwhile, Dragon Ball New Age manga unwraps a new battle. This time the Prince of Saiyans, Vegeta is against the Legendary Super Saiyan, Broly. Though Vegeta initially dominates, Broly quickly overpowers him.
At this time, Goten and Trunks fused to transform into Gotenks and tried Super Saiyan 3 form to counter Broly. However, Vegeta refuses to give up against Broly and he ultimately transforms into Super Saiyan 3.
Though in the official anime we have never seen Vegeta going Super Saiyan 3, in Dragon Ball New Age it is a treat to watch a fan-favorite character unlock new abilities. Vegeta unleashes every drop of his energy to launch a final flash attack.
Broly fails to counter the attack and Vegeta finishes Broly’s body forever. While demolishing Broly, Vegeta passes a punchline saying, “You may be the legendary Saiyan. But I am the Prince of Saiyans. So now, die!”

Like most of the series, Dragon Ball New Age manga ended on a peaceful note. While Broly was demolished, Dr. Bill got his hands on the Dragon Balls. However, Gohan jumps into the scene to stop Dr. Bill wishes back the hand of his father Goku.

Like many other evil characters, Mammad too appeared on Earth with the sole intention to rule it. However, this time he has some stronger competitors like Goku, Vegeta, and more. However, the Z-fighters initially could not counter the immense power of Mammad. The evil dominated every fight and killed almost every Z-warrior.
For a span of three years, Mammad enjoyed ruling over the world of humans. However, Bulma ultimately got her hands on the Dragon Balls and wished back all the Z-fighters. Though the condition of Earth was the worst, this time Mammad had some strong foes as all the Z-warriors were even more powerful, training in King Kai’s planet.
However, Mammad unleashed his true potential and defeated every Z-warrior except the strongest Saiyan on Earth, Goku aka Kakarot. Though Goku initially dominated, ultimately Mammad used his Pure Evil D Big Ball attack to kill Goku.
While everybody believed it’s the end of mankind, Vegeta walked into the scene and tried to attack Mammad. However, he ultimately failed. So, Mammad destroyed the Earth and left the place with his army.
But before turning the world into ashes, he got hold of Dr. Bill and gathered the information of Iron-Broly.

Though Mammad had a huge army, he did not believe anyone. So, he needed a man of trust who could revive him with the help of Dragon Balls after his death. Therefore, he created an Android titled Android313.
But this time he recalls Broly and he ultimately executes his plan of moving Broly’s cells to his own body to change into the Legendary Super Saiyan. Now, it’s time for revenge. But guess what? The Z-warriors are back and Earth is restored with the help of Dragon Balls.
So, now Android313 and Broly with their army plan to make the second attack on Earth.
They quickly reached Earth but this time there was a slight change in the scenario as the Z-warriors are pretty much stronger now. Piccolo, Krillin, Yamcha, and Tien single-handedly defeated all the men of Mammad. While Broly took over and started attacking Goku, Android313 attacked Vegeta.
Noticing conditions worsening, Goku and Vegeta fused to transform into Gogeta. But Mammad turned into a Legendary Super Saiyan. Gogeta easily overpowers Broly. But in the meantime, the fusion time runs out.

Things were getting worse as Mammad fused with Android313 to form Mammad313 and he is even stronger now. So, now Vegeta crafts a full-proof plan. He asks Goku to reach out to Supreme Kai, begging for the Potara Earrings.
Meanwhile, Vegeta tries to buy out some time till Supreme Kai gets into the scene. Supreme Kai hands over the Potara Earrings to Goku and he passes one to Vegeta. Meanwhile, we witness the transformation of both the warriors into one of the most powerful characters, Vegito.
While Vegito easily dominated the fight, Mammad played his master move. He fired on his opponent to wacky him then thake of his Potara earrings.
Mammad yelled out revealing that he will fuse with Broly. Within a blink, Mammad fused with the Legendary Super Saiyan and turned into Brommad313.
The world witnessed the most deadly fight, and Vegito was running out of power. Brommand was overpowering the Saiyans. Meanwhile, Krillin gathered the Dragon Balls and wished that Brommand turned to Broly. Ultimately Vegito killed Mammad and his team with the Final Kamehameha.

Dragon Ball New Age Rigor is one of the primary antagonists of the Dragon Ball New Age online doujin. Rigor is the half-brother of the Prince of Saiyans, Vegeta. He makes his debut in the Rigor Arc. The story introduces him as a timeline counterpart of Vegeta’s brother, Tarble.
Rigor possesses the ability to manipulate and utilize ki both offensively as well as defensively. Some of his key moves are – Power Manipulation, Final Revenge Cannon, and more.

Q1) Is Rigor Stronger Than Goku?

Q2) Who Is Rigor Dragon Ball?

Ans – Rigor is one of the strongest characters in Dragon Ball Universe. He is the primary protagonist in Dragon Ball: Breaking Bad. Rigor is introduced as the son of Broly, the Legendary Super Saiyan.

Ans – Gure, an alien, is the wife of Vegeta’s brother, Tarble.

Q4) What Are The Characters In Dragon Ball New Age?

Ans – Iron-Broly cut Goku’s hand in Dragon Ball New Age manga.
Conclusion
If you are here, we know you loved the Dragon Ball New Age article. Make sure you stay connected as we will bring you even interesting articles in the future. Share this article with your friends to grab them into a new world of entertainment. Bookmark our page to get regular updates on the latest anime.