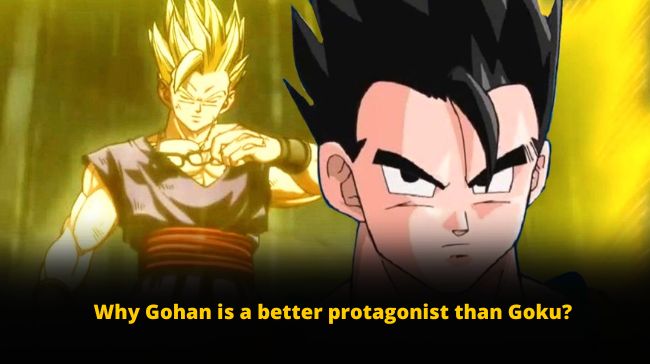 Created by Akira Toriyama, Dragon Ball Z is one of the greatest creations in the anime culture and has always been a classic.

For many anime fans of the modern-day Dragon Ball Z was the first anime they have ever watched. The show follows the story of Goku and his adventures. Although the show may feel like Goku’s exclusive story only, Dragon Ball Gohan, Goku’s son, has been proven to be a better and more sympathetic protagonist of the show.

So here in this article, we will talk about the reasons why Dragon Ball Gohan is a better main character than Goku.

Why Dragon Ball Gohan Is A Better Main Character Than Goku?

If you are also one of the fans who want to know why Gohan is more likable than Goku, then here you will get to know about some reasons why Dragon Ball Gohan is a better protagonist than Goku.

Gohan is more empathetic toward everyone

One defining quality of a good protagonist of a show is good morality and a likable personality, which Dragon Ball Gohan bodies so naturally.

Although Goku may be the strongest one present in the room, Gohan is considerably more empathetic and caring towards his friends.

Gohan’s most important transformations only occur in order to save his friends from their sufferings, which says how much Gohan cares about his loved ones and about his selfless nature.

Gohan is a more flexible protagonist

From the very first episode of Dragon Ball Z, Gohan was depicted to become a stronger and stronger defender than his dad.

However, during the Buu Saga training, Gohan’s strength reaches its peak and he decides to stop practicing martial arts.

But Dragon Ball Gohan quickly gets back on track on his training when he returns to the battlefield, which shows that he is a more flexible hero than Goku.

Gohan is not after fame

Unlike Goku, Gohan has always concealed his identity behind the alias the Great Saiyaman in order to avoid fame and glory.

Dragon Ball Gohan does this to protect his family from the spotlight and to have a life outside his heroic agenda. Which says a lot about Gohan being a selfless hero.

Fusion is when two powerful individuals fuse into one super strong being to defeat the enemies.

The fusion has existed with many characters in the show, even Goku and Vegeta. However, Gohan is one of the very few saiyans who don’t resort to fusion to solve his problems, proving his greater strength.

Gohan can balance his family life with his heroic life

Heroism comes with a big struggle of managing one’s normal life with a heroic life- and Gohan seems to have been handling it like a pro.

Dragon Ball Gohan is one of the strongest individuals in the franchise, yet he has still not undergone any kind of major transformation in his life after his upgrade from Old Kai.

This says that Gohan can still get even more stronger in the future, making him the most powerful character surpassing Goku.

In conclusion, Dragon Ball Gohan should definitely get his own protagonist era in the new Dragon Ball Super: Super Hero movie and have a chance to prove himself as a better protagonist than Goku.