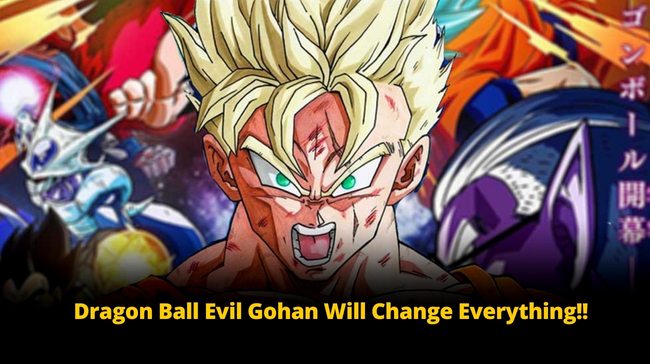 Gohan, the one sweet kid who turned into a gentleman, is liked by many of his fans. Since birth, only Gohan has been the pampered kid and is liked by everyone. He is the son of Chi-Chi and Saiyan fighter Goku.

Recently, the new chapter of Super Dragon Ball: Ultra God mission has been aired, and enthusiasm in the crowd has reached its peak. In this new Dragon Ball series, one which no one has ever imagined has happened.

The evil form of Gohan has returned from the alternate timeline! This evil Gohan is nothing like the one we have seen and has a completely different set of plans for himself. Words will not be enough to explain the crowd’s reaction after reading this!

Dragon Ball evil Gohan is a servant of the bad Supreme Kai of the time, Aeos. Aeos is the new character brought into the franchise and can be the most hurtful thing the Z fighters have ever experienced. According to Aeos, she is the only one who can pass judgment on all the history and will decide what to do.

The master plan of her is to capture every fighter in multiple timelines and make them fight in the Super Space-Time Tournament. It’s a tournament specially designed by Aeos herself. Soon after finishing the rules of round 2, she started gathering the captured warriors and transferred them directly to a place called black.

The chapter ended on a cliffhanger where Xeno Trunks found himself in a deserted city, with none other than his mentor, his brother himself, The Evil Gohan!

The appearance of the Dragon Ball Evil Gohan!

The Dragon Ball evil Gohan is completely poles apart from the normal Gohan. The future evil Gohan has an arm missing looks completely like Goku, and has scars on his face explaining what kind of history he would have.

The evil Gohan directly attacked trunks without any second thoughts. Boxes, who was still absorbing his friend’s attire, was still in trauma. Trunks didn’t shoot back at the evil Gohan because of the psychological pressure of Gohan being a friend.

However, Trunk’s trauma turned into rage, and he transformed himself into the Super Saiyan God and instantly stopped the evil Gohan. Though future evil Gohan is temporarily stopped, he will likely return and cause more psychological damage to the Z fighters! The crowd can’t wait to read the next part of the story!

Why was this Dragon Ball Evil Gohan form expected?

As well all know that the Z fighter has led the various changes in the timeline, causing the emergence of evil Gohan.

For Goku, his bad form already tore apart the entire universe and was already very disturbing.

The entrance of evil Gohan is the cherry on top. Much more is yet to come in the DBZ series. Stay tuned, and don’t forget to follow us.