The immense popularity of the Dragon Ball franchise has led to the creations of a bag full of series branching from the main story. While some of these series turned out to be incredibly popular, many of them failed to impress the fans. One of the most popular series that touched a cult status among the fans is Dragon Ball AF.
Dragon Ball AF is actually a myth series following the Dragon Ball GT series. Though it’s incredibly well-received by the fans and it’s regarded as an unofficial continuation of the GT series, it’s too wild to be real.
But, if you are a true Dragon Ball anime fan, you may be curious to know more about the Dragon Ball AF manga. Therefore, in this article, we have covered everything you need to know about the Dragon Ball AF series. So, fans gear up as we are going to introduce Super Saiyan 5. 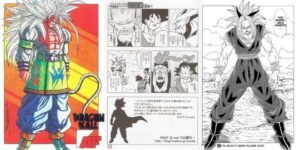 So, every Dragon Ball fan knows that there is no existence of Dragon Ball AF and it’s a complete myth series. But why has it turned so immensely popular? Or why do the fans clamor for the series? Here is all we know about Dragon Ball AF.

Dragon Ball AF – What Is The Plot Of The Series?

Well, as we know, most of the Dragon Ball series introduced a singular plot branching to several subplots. However, this is not the case with Dragon Ball AF. The series does not drop any singular plot. The series is loaded with fan theories and fan-arts.
So, any Dragon Ball fan can jump into the Internet platforms to add a pinch of the story to the series. Initially, the series introduced a bunch of would-to-be sequels and some insane fan-arts. However, later two mighty fan-comics jumped into the scene to make Dragon Ball AF, worth a watch for the true fans.
Toyble and YoungJiji curated the most interesting stories for Dragon Ball AF manga and the fans showered their love on the fan-made comics.

When it comes to the first Dragon Ball AF fan-made comic, one name that hit us is Toyble. Toyble’s story introduces us to a female Kaishin. She somehow manages to steal Goku’s seed which she utilizes to impregnate herself with an attempt to create Goku’s illegitimate son. She names her Zaiko.
However, later he became popular as Xicor. As the story proceeds, the fans get a glimpse of Xicor’s powers. Xicor turns out to be one of the most powerful entities in the universe as his energy levels are higher than Vegeta and Gohan’s Super Saiyan 4 form.
This leaves Goku hunting for the Super Saiyan 5 form with the aim to defeat the half-Saiyan and half-Kaishin. While the story turned out immensely popular, fans related the idea to the Goku Black and Zamasu arc.

YoungJiji introduced his own version of Dragon Ball AF consisting of 19 insane volumes, running since 2011. The 19 volumes were broken down into multiple arcs which delivered an edge of entertainment to the fans. Dragon Ball AF chapter 1 introduced Frieza’s son named Ize.
Later, we witnessed the aftermath of Dabura’s death as Chiyoko and Marble, the two incredibly powerful demons jumped into the plot hailing from Hell. The terrible activities of the evil entities lead to the Dragon Balls getting sealed up resulting in the formation of new Shadow Dragons.
With some nail-biting actions, a new villain popped out in the scene titled Spoitz. It’s pretty similar to Dragon Ball Super Heroes, which is a promotional series to the game. This fan-written comic got huge recognition from the audience and turned out to be a hit series running for a long period.

As the story of Dragon Ball AF manga chapter 1 begins, we are introduced to the time when Frieza is showcased floating in outer space following the deadly battle with Goku. The chapter initially traces us back in time revisiting the moments when Goku awakened his Super Saiyan form at planet Namek.
It showcases how Goku overpowered Frieza, the ruler of the universe on Planet Namek. While Goku launches his final attack, Frieza manages to save himself and return to his father, King Cold’s ship.
We are then dragged back into the rejuvenation chamber, where the evil Frieza is healing himself. While King Cold is shocked witnessing Frieza’s condition, one question that is haunting him is how could a mere Saiyan defeat his son? Meanwhile, the limelight shifts to a mysterious character standing beside King Cold.
Later she was introduced as Frieza’s mother. While King Cold has been clamoring at the sight of his son, Frieza’s mother’s attitude appears to be a bit mysterious. She actually walks out of the scene and announces her disappointment.
She reveals that she no longer wants a son who is not the best in the universe. While she walks out, she orders a henchman to prepare a ship for her. She reveals her plan to get to the most powerful entity of the universe, a Saiyan named Goku. She further highlights that Goku will be her key for universal conquest.
As the story proceeds, we experience a time jump. A crisis never witnessed before hitting the earth. Dragon Ball AF chapter 1 now jumps to the time when Goku and his mates have already saved the peaceful planet Earth from some terrible villains like Cell, Majin Buu, and more.
While every time a new threat appeared, Goku and his team unlocked new power levels to counter them. However, later Goku vanished from the living world with the most powerful Dragon, Shenron. So, the world was deprived of its ultimate savior Goku, and the Dragon Balls.
However, circumstances were back to normal, and the Earth was at peace. Though the original story drags us to the Dragon Ball series, Dragon Ball AF simply follows the aftermath of Dragon Ball GT instead of Dragon Ball Super.
As the narration goes on, we are transported to the college in Satan City. We are introduced to Gohan, who is now a Professor. While Gohan was returning home as the Great Saiyaman, he suddenly notices two Saiyan space pods crashing somewhere near the city.
The limelight then shifts to two individuals standing on a hill scrutinizing the city. Suddenly one of the mysterious characters speaks up saying, “Oh! So this is Earth, the planet from where father is from.” As we move on to the other character, it’s Frieza and Cooler’s mother.
She says, “Yes! Yes, indeed it’s your father’s planet and it’s time to fulfill our parent-child ambitions.” Suddenly the other character screamed and laughed, “I, Xicor, the son of the most powerful entity in the Universe, Son Goku has finally arrived on the Earth.”
While they were having a hot conversation, Xicor suddenly notices someone flying. It was Gohan. So, what’s next, will a terrible fight ignite between Goku’s most loved son Gohan and Xicor? Stay tuned as we will update the page with even more intense chapters from Dragon Ball AF manga.

Where Can I Read Dragon Ball AF Manga?

The official DB AF manga is not available. But don’t worry as we will cover a detailed summary of every chapter once they are released. You can read Dragon Ball AF Chapter 1 summary above in this article. We will make sure to add more in the future. So, stay connected and follow our website.

Ans – Though Dragon Ball AF was initially created to make a debut after the climax episode of Dragon Ball GT, it did not really get the green light from the franchise.

Q3) How Old Is Goku In Dragon Ball AF?

Ans – Unfortunately, there is no Super Saiyan 5. It’s only a fan-made character that got huge popularity due to its incredible character design.

Ans – West Kaioshin is Xicor’s mother. Xicor is titled the main antagonist of Toyble’s Dragon Ball AF version.
Conclusion
If you are here, we know you liked the article. We will cover more chapters from Dragon Ball AF manga. So, make sure to stay tuned and bookmark our website for exciting content on the most popular anime. Share this article with your friends and all Dragon Ball lovers.