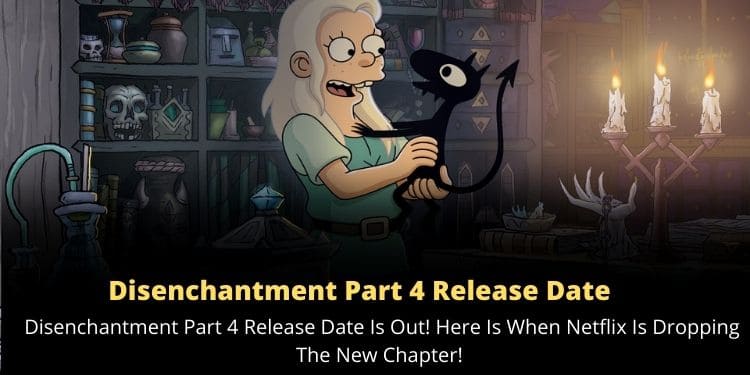 The streaming king, Netflix has unveiled Disenchantment Part 4 release date. So, here is everything we know.

Netflix has a rich library of mature animated content to amaze the fans. It has created tons of animated masterpieces to deliver jaw-dropping fun and Disenchantment is one of them.

While part 3 has simply driven the fans crazy, they are eagerly looking forward to know the Disenchantment part 4 release date. So, Netflix did not disappoint its viewers and the streaming giant has already revealed the official premiere date of Disenchantment Part 4. Here is all we know.

Within a few months after its arrival Disenchantment turned out to be a big show streaming on Netflix. It has racked up insane reviews from the fans and the critics. Coming from the Simpsons and Futurama creator, Matt Groening, Disenchantment is presently one of the flagship animated shows on Netflix.

Disenchantment follows the story of the drunken misadventures of Queen Tiabeanie and her friends, Luci and Elfo. Loaded with pieces of comedy, thrill, and excitement, the show has gradually turned out to be a fan favorite.

The show first debuted back in 2018 and delivering the fans insane humor and quality animation, it turned out to be their favorite. The third chapter was recently wrapped up and the fans are now clamoring for Disenchantment part 4 release date. So, when is the fourth chapter dropping on our screens? Here are all the hot details.

Disenchantment Part 4 Release Date – When Is The New Chapter Dropping?

Disenchantment is returning with its part four on February 9, 2022. Netflix revealed the news by dropping an image of Bean (played by Jacobson) with the caption, “Bow Down.” So, fans gear up as it’s only a matter of a few days and we will see our favorite characters back on the screens.

Disenchantment Part 4 Storyline – What Will Happen?

The official synopsis of Disenchantment part 4 reveals – “The mystery of Dreamland’s origins and the stakes for its future – become ever clearer as our trio – and King Zog – find themselves on personal journeys that will ultimately tie into the kingdom’s fate.”

Disenchantment Part 4 Cast – Who Will Be In?

As per the official leaks, the upcoming Disenchantment chapter will bring back the characters of Eric Andre as Luci and Nat Faxon as Elfo. While there will be some new faces such as David Herman, Lucy Montgomery, Tress MacNeille, John DiMaggio, Richard Ayoade, Matt Berry, Rich Fulcher, Maurice LaMarche, and more.

In case there are any more additions we will be updating you, so make sure to stay connected.

Disenchantment Part 4 Trailer – Is There Any Official Trailer?

Netflix has just revealed the official trailer of Disenchantment part 4 and it is simply amazing. You can also have a look at the awesome trailer below –

Follow us for more interesting articles in the future. Also, bookmark our page for new updates on all the latest Netflix series and movies first.

1 thought on “Disenchantment Part 4 Release Date Is Out! Here Is When Netflix Is Dropping The New Chapter! ”