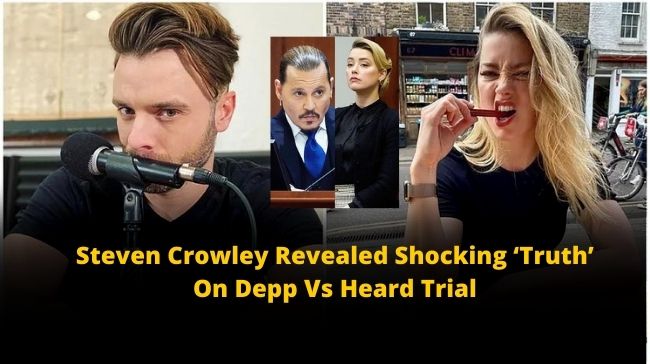 The popular ‘Never Back Down’ star reveals this thought about the Depp vs Heard trial. He thinks that the trial is loaded with lies and the star made a shocking revelation about Amber Heard’s cocaine use.

Heard and Crowley worked together back in 2008 in the ‘Never Back Down’ movie. Recently, when Steven was questioned about Depp vs Heard trial, the star spoke about Amber’s cocaine use.

Moreover, Steven unleashed a new storm of allegations on Amber Heard, revealing her relationship with Tasya Van Ree. Here is what the popular star said about the Depp vs Heard trial.

Steven Crowley played the role of Heard’s best friend in ‘Never Back Down.’ So, staying together for such a long time to shoot the film, the two stars came closer to each other and turned out to be real-life friends. So, recently on his YouTube channel, Steven shared an insight into Heard’s personal life and addictions.

As the Depp vs Heard trial gets more and more intense after both the parties are exposing each other, Steven’s statement may shed some light on the real truth.

Steven Crowley said Amber Heard was in a relationship with Tasya Van Ree in 2008. However, they did not make it public. He also said that when Tasya accompanied Amber to the set for the first time, she introduced Tasya as her best friend.

Steven Crowley Made Shocking Revelation On Depp Vs Heard Trial

Steven Crowley, in a recent interview, said, “I was at her [Amber] place the first time we hung out and she is in the kitchen and she goes ‘You Party?’ and I am like ‘Oh Yeah, I party’ and she whips out some coca-colas [cocaine] and starts doing it.”

He further said, “I go ‘Oh, I did not know that’s what party meant, I thought you meant to hang out or let’s go drink.”

Steven Crowley further alleged Heard to be a big liar in the context of the Depp vs Heard trial.

He said, “When I am watching the Depp vs Heard trial and what’s going on, the thing I find really irritating it’s just lying.”

“At least Johnny Depp, being a flawed alcoholic and drug addict, at least he is like open and admitting it, but with her, it’s like there are so many people who know that it’s not true. Why isn’t anyone saying anything?”

“She once said she would much rather be addicted to this referring to cocaine, than to cigarettes.” “So, the most confusing part is how are there no messages from her talking about drugs outside of weed and mushrooms.”

So, fans, what do you think about the Depp vs Heard trial after Steven’s statements? Who is right? Tell us in the comment box.

Read More – Pirates of the Caribbean 6 Updates: Johnny Depo May Return As Jack Sparrow According To A Rumor!!