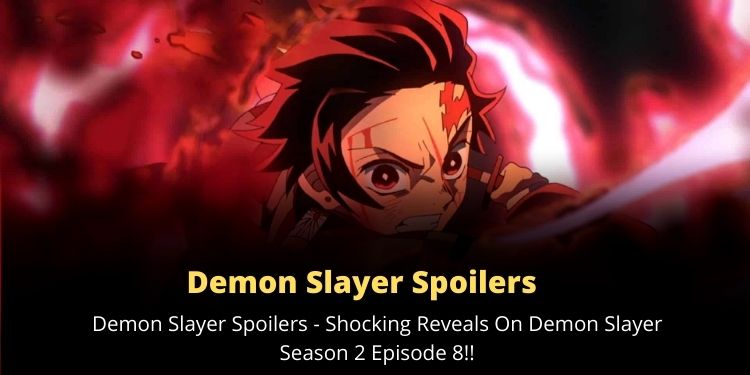 The “Demon Slayer: Kimetsu no Yaiba Entertainment District Arc” release date is now confirmed, and the arc is presently in its second season. The eighth episode of the Demon Slayer series will air this Sunday, after the conclusion of the Entertainment District Arc last week, which was filled with drama and excitement. With the second season’s release, the anime series has piqued the interest of fans and followers, and many of them are already looking for demon slayer spoilers.

With a total of seven episodes, the demon Slayer Mugen train storyline is finally complete. This article will go over some significant breakthroughs in Episode 8 and what to expect next in the franchise. The Demon Slayer Entertainment District Arc, the core portion of the second season, is the next item to look forward to.

The preceding episodes are now accessible to watch almost everywhere, including Crunchyroll, Funimation, and Hulu. If you are not sure about the storyline even after going through some of the previous episodes, check the demon slayer spoilers here to get a better grip.

The finest episode of the arc will be Demon Slayer Entertainment District Arc Episode 8. Tengen Uzui will face Gyutaro and Daki, the true Upper Demon Moon Six, in the episode titled “Gathering.” According to demon slayer spoilers, the fight is going to be harsh, and there is doubt whether Uzui will be able to come out on top. The fight between Uzui and Gyutaro would be incredible to see, and we will have an opportunity to witness Sound Hasira put on a show.

Gyutaro is a formidable opponent. He was able to effortlessly evade Uzui’s assaults while attacking him simultaneously. Even though we all know Uzui is a Hashira and one of their quickest, his strikes were repelled as if they were nothing.

Gyutaro has also miraculously cured his sister Daki’s injuries. As a result, demon slayer spoilers map that Uzui has to face a problem from Daki later. It will be very tough to combat them both at the same time. Even though Uzui can beat Daki in a flash, he must struggle to overcome Gyutaro, the true Upper Demon Moon Six.

Gyutaro’s assaults are not only very strong, but they also can shift directions at will. Gyutaro attacks his foes with a pair of sickles. He wields weapons in both hands, much like Uzui.

Gyutaro’s blood demon art also enables him to control blood according to his desire. He can use it to generate thin, hard blades that can slash through structures and twist and bend those strikes to reach the target.

As a result, Gyutaro succeeds at both long- and short-range assaults. As we may have seen in demon slayer spoilers that his defense is also rather good, but his protective powers surge along with his sister, Daki. Daki can move her belt, which may be used for defense and assault.

As a Shinobi, Uzui’s combat style is distinct, and he is not only better at swordsmanship but also has a variety of tricks under his sleeve. He employs ninja equipment such as explosives, kunai knives, shuriken blades, and others.

Now it is time to discuss other important characters of the franchise. As per demon slayer spoilers, Tanjiro, Inosuke, and Zenitsu also have a major role in Episode 8. Considering Gyutaro’s might, it is difficult to assume that these three can have a scope against him.

But they should not be underestimated. They have all put in a lot of effort over the last several months and have become a lot stronger as a result. In the demon slayer corps, they had already advanced four ranks. Tanjiro, Inosuke, and Zenitsu are expected to combat Daki while Uzui battles Gyutaro. However, of course, you can see who will win the battle in due time.

After going through the demon slayer spoilers, it is time to talk about the release schedule. Demon Slayer follows a weekly release cycle for the current arc, with episodes airing every Sunday. On January 23, 2022, Episode 8 of the Entertainment District arc will be aired.

The episode initiates with Daki and Nezuko resuming their struggle after she experienced a new change. While Nezuko was outperforming Daki, she lost control and came dangerously close to injuring a human. Tanjiro had no choice but to intercede since he had assured Nezuko that she would not harm people.

Tanjiro kept her in position by using the sheath as a muzzle. Daki returned a few moments later, and the position seemed hopeless. Tanjiro had to keep Nezuko in place while also protecting the citizens around him and fighting Daki. In demon slayer spoilers also, we can see Tanjiro having a fierce fight with Daki.

However, Tengen Uzui, the Sound Hashira, arrived just in time to face the Upper Moon Six. He encouraged Tanjiro to put Nezuko to sleep by singing her a lullaby.

Tanjiro has sung the same song as her mother had. Nezuko sobbed and reverted to her previous self. Tanjiro exhaled with satisfaction when Nezuko shut her eyes and went to sleep shortly after.

Zenitsu and Inosuke quickly caught up and tried to assist Tengen Uzui. Despite killing Daki, the demon talked and kept possession of her body. Gyutaro, her younger brother, appeared from her body and assisted Daki in healing her injuries.

Gyutaro demonstrated his talents by hardening his blood and constructing sickle-like weapons to murder Hashira at the conclusion of the episode.

Hope you have enjoyed the above demon slayer spoilers. If you have not watched the series and are not sure about its quality, we can promise you that it is excellent! IMDb gives the program an 8.7/10, while MyAnimeList gives it an 8.57 average audience rating. Now, watch Episode 8 on January 23 and enjoy the spark of characters. Happy watching!