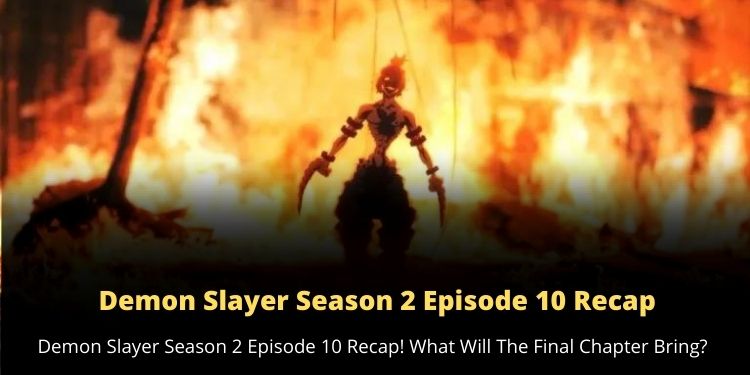 When it comes to the most viewed anime shows across the OTTs, the first name that hits every fan’s mind is Demon Slayer. With a wide array of characters, edge-dropping animation, and a super-catchy storyline, the show has simply conquered the hearts of anime lovers.

Therefore, with the show racking up so many praises, the creators of Demon Slayer are back with a fresh chapter titled the Entertainment District Arc.

Demon Slayer Season 2 has already dropped the first ten episodes from the Entertainment Arc and from the very start it’s simply awesome. Episode 10 is no expectation as it has put the audience into a roller coaster ride of thrill, action, and drama. So, without any further ado, let’s dive into the tenth episode of Demon Slayer Season 2.

With the final battle against Upper Rank 6 demons reaching its climax, the story has brought a storm of changes for Tanjiro and the team.

Demon Slayer Season 2 Episode 10 drags the limelight back on Tanjiro and Nezuko. The start of episode 10 is pretty connecting and emotional for the fans. We see Tanjiro surrounded by all the dead bodies of his friends. With hopes shattering around and Gyutaro turning out to be one of the scariest villains of Demon Slayer, it seems Tanjirao would have to get his hands on something out-of-the-box to overpower the villains.

As we have reached the finale of Demon Slayer Season 2, the core plot is pretty crystal clear. While the story started with Tanjiro squeezing out all his expertise to save his sister, by the end, it seems the main danger is looming on Tanjiro’s head.

So, it’s Tanjiro who needs help. Moreover, if we shift to the technicals of Demon Slayer Season 2 Episode 10, the latest chapter is well animated and the action sequences are simply a treat to watch.

By the end of Demon Slayer Season 2 Episode 10, some of the key elements that we know are –

The heartbreaking deaths – Hands down! Demon Slayer is a journey of emotions. The death of Temari Demon this week was insane heart-wrenching.

Blondie made an insane comeback – By the end of episode 10, we got a terrible luck blondie from the last selection. So, it will be interesting to see how the character will dominate in the last chapter.

So, here is the Demon Slayer Season 2 Episode 10 recap. Do let us know what do you think about the season finale?