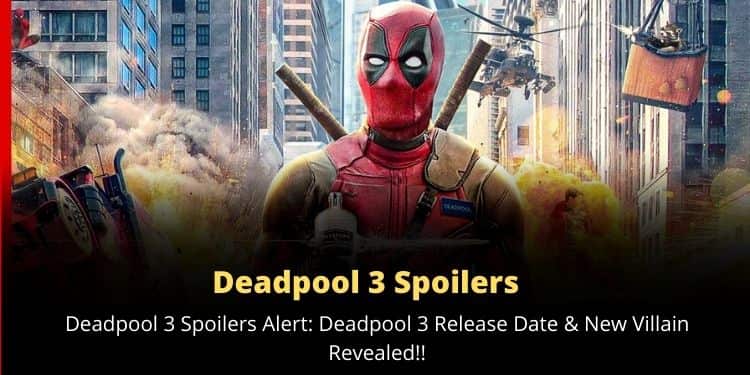 All Deadpool fans, gear up as the new installment of your favorite franchise is ready to make its way to your screens. Deadpool 3 is underway and the fans are pretty curious to get some leaks on the new movie. So, after a lot of hassles, gathering information from various sources, Sassyshow has racked up some Deadpool 3 spoilers. Here is all we know so far.

It’s been really long we have been craving to see our favorite Marvel character, Deadpool back on the screens with a solo movie. Fans have been speculating the Deadpool 3 release date for a long time, but finally, we have some solid pieces of evidence.

The good news is Deadpool 3 is definitely happening. Though there is a lot of work left before delivering the movie to the doors of the audience, Marvel is planning something bombastic this time. Marvel has boarded in an exciting pair of writers to craft the Deadpool 3 plot.

Back a few days, Marvel’s head, Kevin Feige confirmed that Deadpool 3 is coming. He revealed, “It will be a rated R and we are working on the script as of now and the Ryan’s overseeing a script right now.” He further added, “ It’s exciting for it to have begun… A very unique type of character in the MCU, and Ryan is a force of nature, which is just awesome to see him bring that character to life.”

So, at least Marvel instilled a new life in the Deadpool fans with their official statement. However, it’s been a long time and Marvel is busy with other projects keeping Deadpool aside. So, what’s the status of the Deadpool 3 movie? Is it dropping in 2022? Here is everything you need to know.

Deadpool 3 Release Date – When Will The New Movie Drop?

Marvel and Disney Plus have shared the release date of all their projects lined up in the upcoming months. However, one movie that has failed to make its way to the schedule is Deadpool 3.

But as per the leaks, Marvel creators may drop a surprise bomb and the speculative release date of Deadpool 3 is July 2022. Fingers crossed and let’s hope our favorite character makes a booming comeback this year.

Deadpool 3 Plot – What To Expect?

We have a lot of Deadpool 3 spoilers in our bucket. Starting with the plot of Deadpool 3, it will come with a bunch of twists and turns.” In the last chapters, we have seen Deadpool assemble a team of super-powered mutants to jump into a deadly mission. The team included himself, Vanisher, Bedlam, Zeitgeist, Domino, Shatterstar, and more. However, they were ultimately killed off.

While we move to the second installment, Deadpool and Cable were resurrected in X-Men: Apocalypse utilizing Cable’s time machine. As per the Deadpool spoilers, Deadpool 3 will be a smaller but more gander movie from X-Force.

Writer Rett Reese revealed they are preparing something that will be wrapped in suspense, thrill, action, and entertainment. Deadpool 3 will give the audience a thousand reasons to whistle loudly.

As per the Deadpool 2 spoilers, the new Deadpool movie will either continue the storyline from where it left us or it will bring new adventures to stun the audience. It may introduce new cast members and take the plot to a new level. The creators may add new mutants to make the project even bigger. So, let’s wait for any official trailer to know what’s coming.

Deadpool 3 Spoilers & Leaks – Who Will Be The Villain In New Deadpool Movie?

Some major Deadpool 3 spoilers have been received by Sassyshow and it reveals who will be the villain in Deadpool 3. Reports claim the new Deadpool venture will drag in T-Ray as one of the official villains. Though this may sound like rumors to most fans, the sources reported that there are strong chances of T-Ray’s debut in the new Deadpool movie.

Who Is T-Ray? Deadpool 3 Spoilers

With the Deadpool 3 spoilers pointing out the name of T-Ray as the upcoming villain, many fans may be confused about who is T-Ray? So, here is the answer.

T-Ray is one of the worst foes of Deadpool. The character was first introduced in Deadpool #1 that was curated by Ed McGuinness and Joe Kelly in 1997. T-Ray is one of the darkest characters from the comics who hung around a mercenary dispatched place, the Hellhouse for a long time.

In the comics, T-Ray fought with Deadpool to become the best mercenary in the entire Hellhouse. T-Ray showcased incredible abilities, insane powers, and amazing swordsmanship. If we go with the comics, T-Ray’s intention was to kill Deadpool as he found him guilty of murdering his wife, Mercedes.

T-Ray revealed that Deadpool was the mercenary who encountered his wife, and this fueled the fire of revenge in him to kill Deadpool. So, if T-Ray debuts in the official Deadpool movie, it will make great sense and the plot will get the freshness it deserves. The fans will also enjoy the new movie with a new villain in it. So, let’s wait till the creators confirm the news.

Deadpool 3 Cast – Who Will Be In The New Movie?

As of now, nothing is confirmed from the creator’s end. However, we may expect the return of Ryan Reynolds as Deadpool. Moreover, the only member to return from the X-Force team will be Peter as we have seen his bonding with Deadpool. On top of that, we have witnessed how Deadpool saved him in the post-credit scene. So, Peter may also make a comeback in Deadpool 3.

Apart from them, one character that may return in the new Deadpool movie is Vanessa, played by Morena Baccarin as she was one of the characters who was resurrected in the post-credit scene of Deadpool 2.

Moreover, in a recent interview, she spoke up about returning in the new Deadpool movie. She said, “I would love to revive the role.” So, we can expect her in Deadpool 3.

So, here are all the latest Deadpool spoilers and leaks. We will make sure to inform you first once we get any solid leaks on Deadpool 3 release date. So, make sure to stay connected. Bookmark our page to get the news first. Also, leave a comment down below telling us who do you think will be the villain in Deadpool 3?