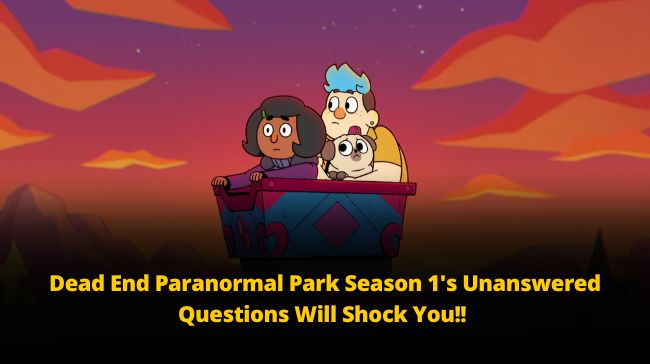 With supernatural occurrences and plenty of LGBT+ representation, this series is famous on Netflix.

With a Happy ending in season 1 after Norma, Barney, and their friends save a Day from a Fiend apocalypse, there are still many unanswered questions from the Finale. So, here are some major ones!!

While arriving at the amusement park, they know that it is a trap being played by a demon Courtney. The devil used the job applications about the amusement park so she could offer some human bodies as vessels to the demon lord, Temeluchus.

But, Barney’s pug, Pugsley, jumps in front of her during the ritual and makes her plan go awry. The results were that the pug was possessed and given some powers by the demon lord, which helped them to know what was going on in the park then. And luckily, Till the end of the season, they save themselves by leaving mysteries to the audience.

At the top of the Dead End attraction was the ghost of Pauline, who was mopping the appeal; suddenly, an entity appeared, zapping her away.

It was identified as an angel reporting to its higher people about the cancellation of the demon invasion. And they are making it more interesting for the human kids by saying that maybe the time of the upper ones is near to visit them.

In the supernatural, are the angels anything, and yes, they’ll not be able to give us much help, and they focus on their goals.

The last episode shows how Temeluchus’s sister, Zagan, reveals that the cuffs were put on by the angels, not by the demons as she thought.

This is one of the biggest unanswered mysteries, and fans want the answer to these questions, opening a whole new plot point to explore.

What bad did Courtney do that she was cuffed for 100 years and is bound to the park, so where can she be before the park was built? With all that has happened in Season 1 of Dead End Paranormal Park, are we expecting a war ahead between the angels and the demons? The final words from Zagan after her defeat hint at something big!!!

“Have fun dealing with the angels without me.” – Zagan

Also Read:- American Horror Stories Episode 2 Cast Revealed: Everything We Know About It!