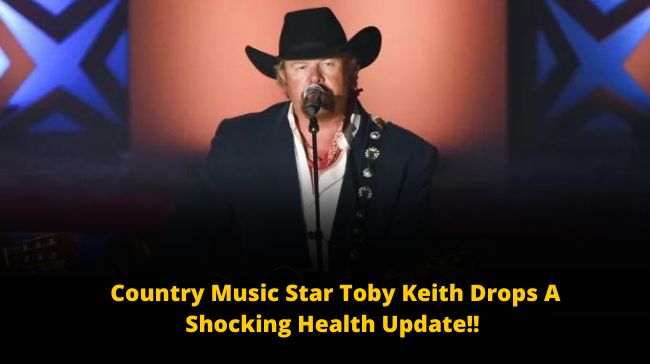 Popular music sensation, Toby Keith has dropped his health update which has left the fans stunned.

The fans are saddened to hear the news of their iconic Country Music star facing the biggest battle of his life and trying to defeat it. Here is all we know.

Toby Keith Is Battling With Life!!

The July 61-born American Country Music star Toby Keith Covel recently announced how he was diagnosed with stomach cancer and his fight with it.

All these albums had received great accolades and earned certifications. They also produced many Top Ten singles along with his debut, “Should’ve Been a Cowboy.” His debut song was a country chart hit and became known as the most-played country song of the 1990s.

It is also claimed that this song received 3 million spins!!

The one known as one of the best Country Music artists, whose five albums reached one of Billboard’s best country music charts, shared how recently, in the last part of last year, a team of medical experts diagnosed him with stomach cancer.

The 60-year-old- Toby Keith shared how he first underwent surgery followed by various chemotherapy and radiation sessions, all of which happened just in the last six months.

Toby Keith noted, “So far, everything is going well. I need time to breathe, recover and relax. I’m looking forward to spending this time with my family. But I will see the fans sooner rather than later. I can’t wait.”

The tour of the Oklahoma singer will now be rescheduled until his return to a probable date as he is physically not well.

Reports share that one of his presentations scheduled on June 17 in Wheaton, Illinois, was also canceled due to his unwell condition.

Also, as per reports, one of his concerts on July 28 in Columbus, Ohio, which was a part of the Ohio State Fair, had to be canceled.

However, the Oklahoma singer will have to wait longer for his probable return to the stage because he is not feeling well physically.

It is saddening to know the condition of Toby Keith and how his schedule stays unknown for the rest of the year.

The irony of life is that Toby Keith has been a longtime advocate for families facing cancer and has been of great help in finding Ally’s House in 2004, a nonprofit group assisting Oklahoma children fighting cancer.

He has been a great helping hand in providing necessary resources for treatment to those children.

We have seen how his friends from the entire industry have been wishing him the strength to fight his most significant battle of life!!

We wish you a speedy recovery Toby Keith – our much-acclaimed Country Music Star!!

Also Read:- Who Is Buster Welch In Yellowstone? Meet The New Characters