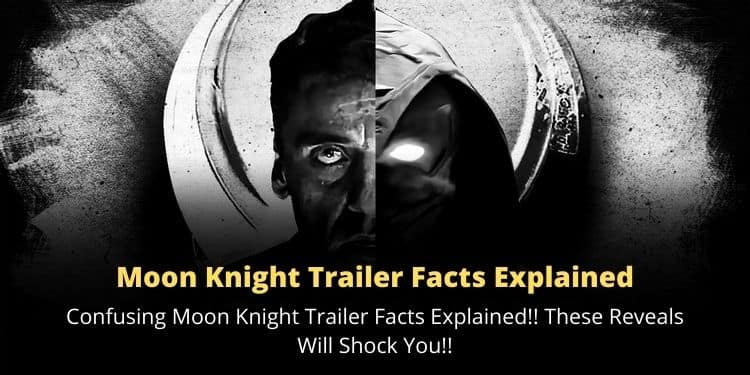 Moon Knight’s trailer has been a great festival for the fans. They have showered their love on the trailer and it has racked up over 1 million likes.

The trailer is simply awesome. However, it has delivered some confusing Moon Knight trailer facts. So, today, Sassyshows is here to explain all the unaddressed questions left in the trailer.

Here is everything you need to know –

Why is Moon Knight In London?

We simply don’t know, what obsession is Marvel developing with the city of London? With the new Marvel superheroes being featured in London, it is pretty obvious that something fishy is going on in the city.

Moreover, Moon Knight Trailer also features Steven Grant in London. But, if you are a Marvel comics fan and you have followed the story of Moon Knight, we believe you know that Moon Knight originally hails from New York City.

Other characters like Spiderman, Daredevil, and Punisher too, operate in New York. Though for many fans, this fact may not seem to be strange, we know everything Marvel does in the past was pre-planned. So, Marvel unlocking new characters in the City of London must be the start of something big.

Therefore, this may impact MCU in a major way. Moreover, the Eternals and Dane Whitman, both hail from London. On top of that, we saw Dane interacting with Blade in the climax scenes of Eternals. So, there are certain possibilities that they may work together as a team in the upcoming MCU projects.

Moreover, as per the comics, Moon Knight may also join their team. Because in Marvel comics, we have already witnessed them forming a huge team titled the Midnight Sons. The team majorly includes Moon Knight, Blade, Doctor Strange, Punisher, Ghost Rider, and many other characters who possess several connections with Hell, Werewolf, Vampire, and other such creatures.

So, there are a lot of Moon Knight trailer facts surrounding London and hopefully, we will get all our answers in the upcoming series.

Who Is The Villain Of Moon Knight?

One Moon Knight Trailer fact that is confusing many viewers is who will be the villain in the upcoming series as the trailer has not specifically showcased any dark character.

With the leaks coming out that Ethan Hawke will play the role of the main antagonist in Moon Knight Season 1, the fans stormed the Internet and Marvel forums passing their speculation about the villain. Most of them speculated that Moon Knight will bring Dracula as the main villain.

However, the official Moon Knight trailer spilled water on all these assumptions as we witnessed the character of Ethan Hawke walking out in the sun and several bodyguards surrounding him. While people are also preaching to him like a God. So, it’s pretty much clear that he is not playing Dracula in Moon Knight.

There are many antagonists who can play a major role in Moon Knight Season 1. If we take an example, Moon Knight’s own brother Randall Spector turned out to be one of his greatest foes in the comics in the early stages of his life.

In Marvel comics, Randall Spector is originally the brother of Mark Spector and he too was a mercenary like his brother. However, Randall betrays Mark Spector and murders his love interest. Then we witness deadly combat between the two brothers and Mark easily overpowers him and throws him into a river.

However, Randall manages to survive and turns into a serial killer. While Mark gains the powers from Khonshu and takes the crown of Moon Knight, Randall artificially develops some powers similar to Moon Knight.

However, we have one more interesting Moon Knight trailer fact on this. As we saw the people around the trailer bowing down to Ethan Hawke’s character, he may be playing the role of Sun King in the new series.

Much similar to how Moon Knight gained his magical abilities from Khonshu, Sun King gained his insane powers from Ammon Ra. In the comics, Khonshu is the son of Ammon Ra. However, due to certain complexities in a father and son relationship, the Sun King was assigned to destroy Moon Knight.

However, as we proceed in the story, the Sun King eventually turns out to be a positive character, and he joins Moon Knight. So, there are high possibilities that Moon Knight Season 1 may introduce the Sun King as the major villain. Moreover, in the comics, there is no official Earthly name of the Sun King. So, it’s possible that he is called Arthur Harrow on Earth.

How Powerful Is Moon Knight?

The third Moon Knight Trailer facts with which the fans are stuck is how powerful is Moon Knight in reality? Well, the answer to this question is not even clear in the comics.

Because at times, the character of Moon Knight is shown possessing incredible superpowers and at a time he is featured as a superhero much similar to Batman or Daredevil, who fights for the truth.

However, one thing that is pretty evident is Moon Knight’s magical abilities amplify during full moon days. So, the series may also pick up this idea.

Another Moon Knight Trailer fact that is pretty confusing is that Mark Spector had the Moon Knight powers suppressed within his body right from the start of the trailer? Or will we get to see the origin story of Moon Knight?

If you know the story of Moon Knight, you may be confused about the trailer. You may be thinking that the trailer initially features Mark Spector as a normal person suffering from a sleep disorder. However, at the end of the trailer, we saw him jumping on the rooftops.

So, how is this even possible?

In most of the series which brings a debut of a Marvel character, we witnessed the origin of the character in season 1 and this thing gets pretty evident in the official trailer. However, the Moon Knight trailer is designed very cunningly, and it leaves less to no spoilers for the fans.

The Moon Knight trailer originally features Steven Grant, a personality of Mark Spector, and as we know Mark has multiple personality disorders.

So, all the scenes in the trailer are delivered from the perspective of Steven. Moreover, the scenes clearly highlight that Grant is totally unaware of his other personalities, Mark Spector and Moon Knight.

Therefore, when the series will feature the perspective of Mark Spector, we will surely get to see the origin of Moon Knight.

This also justifies the fact that he was sacred to Khonshu. As Steven Grant’s personality is completely unaware of God.

Whom Was Moon Knight Beating At The End Of The Trailer?

The most confusing Moon Knight trailer fact is whom Moon Knighting was beating at the end?

Well to be very clear, we don’t have any solid information on that. However, watching Moon Knight ruthlessly delivering multiple blows on the creature, it will surely be an evil character like Werewolf.

However, we have one more fan theory on that. In the Moon Knight trailer, we saw Steven Grant hallucinating an old lady as Khonshu. And because he has a multiple personality disorder, Grant may be hallucinating the character as a devil or monster and this compelled him to deliver multiple blows on him.

So, we hope you loved our Moon Knight trailer facts. Do let us know about your assumptions in the comment box.

Follow us for more interesting articles in the future. Also, bookmark our page to get the updates first.