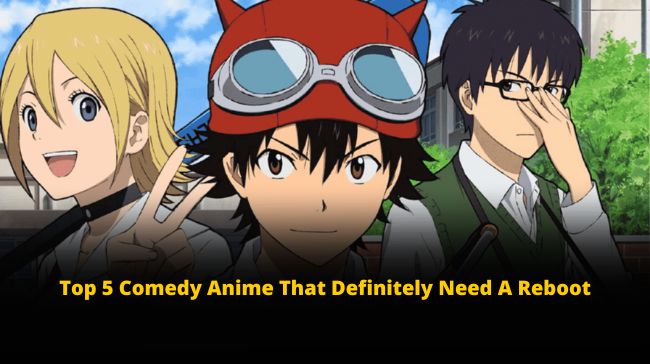 The last decade has seen some incredible shows come out. However, many of them were popular in their time and then just disappeared.

If you would ask us, we would probably say that many of them deserve a reboot. So, today we are listing the top 5 comedy anime that needs a reboot.

The Irresponsible Captain Tylor is an old comedy anime, but it has its moments & has a great scope to grow in coming times. First broadcast in 1990, this work of science fiction anime is a classic.

It’s hilarious, and there are many moments when one wonders whether he can live up to expectations as a responsible adult or should throw in the towel once and for all. The Irresponsible Captain Tylor might be worth your time if you want to laugh hardcore while watching an older anime classic.

Anime series also can be set in fantastical fantasy worlds or future dystopias. Some anime shows use high school as inspiration in one way or another.

Great Teacher Onizuka is a very entertaining anime that follows ex-biker gang leader turned teacher Eikichi Onizuka and his interactions with a brutal class of students. GTO only has 26 episodes, but it’s an economic slice-of-life story that’s also emotional and humorous sometimes.

It also keeps the action brisk, with numerous plot lines for viewers to follow and enjoy! There is a modern remake of GTO, but having a show which follows up on these stellar characters over the years would be even better!

Golden Boy is a slice-of-life comedy anime that comes to readers from the mind of Tatsuhiko Yamagami.

The series focuses on the high school life of Kintaro, a hormonal young man who isn’t afraid to embrace his passion for odd jobs, which are usually over-the-top. Golden Boy wastes no time in making sure that each episode counts, but it also feels like this setup leaves much more potential for laughs than the series initially delivers.

Golden Boy’s current existence is grand, but if they add a modern makeover and additional installments, it would quickly become an indisputable comedy classic!

The 1990s were an extraordinary time for anime, and we do not doubt that the increased popularity of Ninja Turtles helped Samurai Pizza Cats get off the ground. In this era, Mecha Shows were no longer only in Japanese.

With Samurai Pizza Cats, a satirical take on modern samurai shows, we believe there is still more that can be done with this series if given a chance by a network to run 4 or 5 seasons at once instead of just 26 episodes.

Ranma ½ is a unique product of its time and embraces broad comedy in a way that would be much more readily appreciated today.

A series like this one can never get easy, but it doesn’t take itself too seriously despite all the wacky incidents that push Ranma off his rocker.

Still, the show has certain rewarding character relationships, even if there may not be much action to be found. It’s worth revisiting as an anime with such a fantastical world filled with people who value friendship above all else.

This article discusses the top 5 comedy anime that need a reboot! These anime all have great stories, characters, and animation but do not get enough love or attention as they deserve.

We hope that you enjoyed reading the blog, and we look forward to reading your opinions in our comment box.