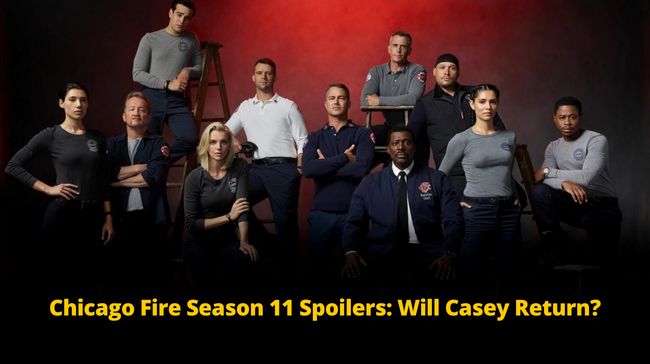 How have you been? Hope you’re doing and keeping well. So as we move ahead, what do you think we have for you? Is it anime? Or any series? Ah, what say? So, it’s about all the details you need to know about Chicago Fire Season 11! And we have some surprises for you!!

Severide and Stella are for sure not getting a peaceful honeymoon as Chicago Fire Season 11 is back!

Looks like this season is back with a bang with lots of twists and turns. Ah, what would you think would be happening? Also, Haas has mentioned that the prime storyline would be having larger ramifications beyond the season opener and we are curious to know as to how that guy got the knife into the courthouse where Severide confronted him—Ah, looks like a lot of riddles would be solved in this upcoming season! Can we expect “An End of Brettsey?” In Chicago Fire Season 11

Like really? We still can’t believe this would be or might happen. As Brett is really struggling with the decision about long distance and Casey, so what do you think would be happening? We are still hoping for the best and keeping our fingers crossed!

Chicago Fire Season 11 has already set up Matthew Casey’s return to the show!

Yes, you can actually thank us later for this sizzling news. It’s like after a decade of working at Firehouse 11, Casey has decided to relocate. Looks like the storyline is going to be super thrilling ahead—what say?

Do you really think can Hawkins and Violet make it work in Chicago Fire Season 11?

As we all know that Violet doesn’t knows the full story about Hawkins as to how far he went to protect her, so it’s difficult to predict yet how distant she’s going to stay from him—any idea?

Are you prepared for A Spooky Holiday Episode in Chicago Fire Season 11?

All the diehard fans might recall from Season 1, and as we haven’t witnessed any Halloween episode in these years, so looks like can we expect in Chicago Fire Season 11? Stay tuned guys, as we’ll be back with a bang soon. Don’t forget to follow us and yes, do share of what you think about Chicago Fire Season 11. Sayonara guys!

Also Read:- How To Watch One Piece Red? Where To Stream It For Free?