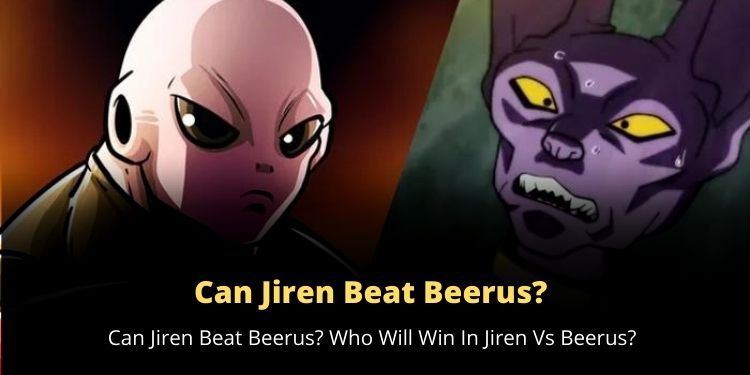 With the popularity of the Dragon Ball franchise reaching new levels, it is introducing new characters to stun the fans. Dragon Ball Super series delivered the fans a wide array of super-powerful characters.

While we interacted with the Gods of Destruction, one mortal who stunned everyone with his immense powers was Jiren, the Universe 11 giant.

Witnessing the incredible powers of Jiren, the fans started a huge debate on social media on what will happen if there will be Jiren Vs Beerus? Can Jiren beat Beerus?

So, what is the reality? Can Jiren beat Beerus? Here is everything you need to know.

Dragon Ball is not only a popular franchise, but it has become a part of the lives of anime lovers. While the franchise mostly focuses on powers, transformations, and martial arts, it keeps on introducing new characters to entertain the fans.

One of the hottest debates among the Dragon Ball Super fans brings out the ultimate battle – Jiren Vs Beerus. So, who will win? Can Jiren defeat Beerus?

Beerus Vs Jiren – Is Jiren More Powerful Than Lord Beerus?

As Dragon Ball Super unwraps, we witness the entrance of the most powerful mortal in the universe 11, Jiren. While the fans were stunned to see the insane power of Jiren, Toppo in the manga quoted that Jiren is far more powerful than Belmond, the God of Destruction of Universe 11.

This has ignited the heated discussion on – Is Jiren more powerful than Lord Beerus? And can Jiren defeat Beerus?

However, Whis said Beerus lost to Belmond. But Beerus revealed that it was just an arm-wrestling match and nothing more than that. So, this does not mean that there was a real head-to-head fight between the two Gods of Destruction.

If we refer to the manga, Beerus is one of the strongest Gods of Destruction who has mastered Ultra Instinct and his Hakai technique makes him more powerful.

Moreover, in an interview, Toriyama, the creator of the manga revealed that he has no plans for Goku and Vegeta to surpass the power levels of Beerus and Whis as of now. So, we have seen how Goku fought against Jiren and the latter had to showcase his full potential to defeat Goku.

This implies that Beerus would be far more powerful than the Universe 11 mortal, Jiren. Moreover, the creators revealed that Goku is getting closer to the levels of god. So, this further backs up to the fact that Beerus will be a clear winner in case there is Jiren Vs Beerus.

So, to answer the question of the fans – Can Jiren beat Beerus? As of now, it’s a no. Lord Beerus, the Universe 7, God of Destruction is far more powerful than Jiren.

However, speaking about Beerus Vs Jiren, there is a lot more to explore. So, let’s have a sneak peek of the insane powers of both these Dragon Ball characters.

Lord Beerus is the God of Destruction of Universe 7. Dragon Ball Z: Battle of Gods introduces the character into the scene and the series features him as the major antagonist. While the fans were impressed with the characters, Dragon Ball Super dragged him back to the show.

Lord Beerus resembles an anthropomorphic cat as his body is purple in color and his bunny-like ears compliment the look. Creator Toriyama has tried to add a pinch of darkness and mystery to the character.

Till the Dragon Ball Z series, all the fans believed that Goku is the strongest creature in the universe. However, Dragon Ball Z: Battle of Gods happened and it introduced Lord Beerus. Beerus turned out to be the most powerful opponent of Son Goku.

Beerus clearly mentioned that his master Whis is the only entity who stands a fair chance of winning against him in the entire universe. This passes a glimpse of Lord Beerus’s actual powers.

Beerus uses Hakai (Destruction Technique) as his major move. This technique instills the ability to turn everything into ashes, even souls. In the manga, Beerus even used the Hakai technique to destroy a Ghost called Dr. Mashirito.

Jiren – Strongest Mortal In The Universe

Jiren was introduced in Dragon Ball Super. Also known as Jiren the Grey, the character came in as a member of the Pride Troopers team, a group of eleven fighters whose mission is to seek freedom and justice.

Jiren’s physical appearance is pretty unique. He has a small face with large eyes and tiny nostrils on it. He does not have any hair on his entire body. While he is incredibly muscular and likes his other team members, he too wears a red and black uniform complemented with white boots.

Jiren can be titled a silent-killer as he is one of the most cold-tempered fights in the complete Tournament of Power Arc. His insane confidence in his powers fuels his arrogance and strength.

During the Tournament of Power, Jiren easily eliminates the greatest fighters from different universes including Hit. Jiren even gave strong competition to Goku in his Ultra Instinct form and nearly overpowered him. This gives a clear picture of how strong Jiren is.

Jiren Vs Beerus – Who Will Win?

If we compare the two characters in terms of pure physical strength, Beerus will lose to Jiren pretty easily. As the Universe 7, God of Destruction has not much to offer in this field. He is a slim, cat-like creature.

While, on the other hand, Jiren possesses a super muscular physique. His body is incredibly strong and steady, much like a bodybuilder.

While on the other hand, Beerus is a God, he has mastered the art of controlling and manipulating energy. Even without the use of the Hakai technique, Beerus can destroy nearly everything. So, Jiren will stand no chance against Beerus.

So, by the end of the article it must be clear to you that though Jiren is stronger than Belmond, as of now, he can’t beat Beerus. Therefore, we believe you have got your answer to – Can Jiren beat Beerus or not?

Do let us know your thoughts on our explanation, in the comment box. Also, make sure to share this article with all Dragon Ball fans.

Follow us for more interesting content in the future and bookmark our page to get all the latest updates on Dragon Ball.

Ans – As per the manga, Belmond was not responsible for the death of Jiren’s parents.

Q3) Who Is The Strongest God Of Destruction?

Ans – Though the creators have not yet confirmed the fact, Beerus is often referred to as the strongest God of Destruction.

Q4) Is Majin Buu A God Of Destruction?

Q5) What Food Does Beerus Favorite?

3 thoughts on “Can Jiren Beat Beerus? Who Will Win In Jiren Vs Beerus? ”