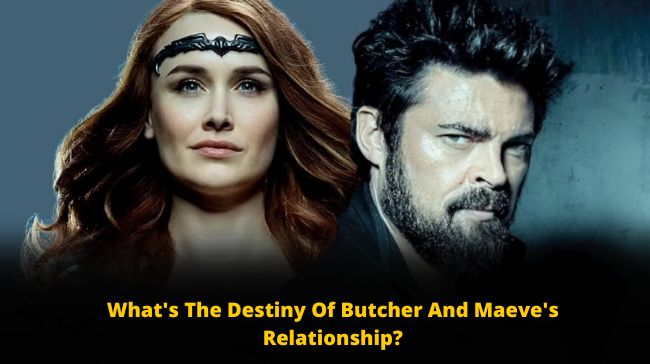 Guys, we know you love us giving such hot updates which just peps up the excitement. Right from drama to love scenes to spoilers to celebs gossip: don’t you love us bringing all that content to you?

Because we can’t wait for a second more to give you the recent update on? What? Any wild guesses? Ah, this time you can definitely guess who we are talking about.

So, with the arrival of the Boys Season 3, there are a bunch of questions coming out. One of the trending ones is about Butcher and Maeve‘s relationship. So, here is everything we know.

What is The Boys Season all about?

As everyone knows The Boys Series is an American superhero television series developed by Eric Kripke on Amazon Prime Video.

Based on the comic book of the same name by Garth Ennis and Darick Robertson, which was actually published by DC comics. The series stars an amazing cast of Karl Urban, Jack Quaid, Laz Alonso, Tomer Capone, and Karen Fukuhara. Oh, we love the members of “The Seven” an elite classy superhero group run by the conglomerate Vouth International.

Well, we love the casts in all the seasons, even you? But let’s talk about season three’s hottest topic!

Any guesses? Yes, we are talking about Butcher and Maeve’s relationship

What do you think about how the Boys creator explains the most intimate scene between the Butcher and Maeve? Yes, it was inspired by the Monster’s Ball. How much everyone is going crazy about this surprisingly intimate scene, huh?

According to the show runner, the encounter was inspired by the “filthy” scene of The Monster Ball.  When the characters of Billy Bob Thorton and Halle Berry meet amidst their heartbreak.

Butcher and Maeve have actually been working together to try and find a way to kill the Homelander. The former gives them three vials of Temp-V or V-24, by also leveling up the superpowers for approx 24 hours. Yes, but did you read the candid quote?

It says “the writers talked about that moment as desperate and a little bit grimy. We talked about the monster ball when Billy Bob Thorton and Halle Berry hook up and it’s just so grimy because they both are literally moaning deaths. So we talked about how they’re cornered right then and there. And yeah, they have so much in common, surprisingly. How they’ve hated the superheroes and how pissed fucked they both feel. And then it just kind of explodes in the hookup!”

We seriously don’t think Butcher and Maeve will end up together. As they both are from different worlds.

In Butcher and Maeve’s relationship, Butcher believes in building alliances when the situation calls for it. Butcher doesn’t hesitate to share a drink with Maeve, he doesn’t hold any hatred, either. It’s also possible that she will die before the dust settles on the final showdown between Butcher and Homelander.

So people, what do you think about Butcher and Maeve’s relationship? Don’t forget to comment below and follow us now so we keep bringing to you such news. Stay tuned.