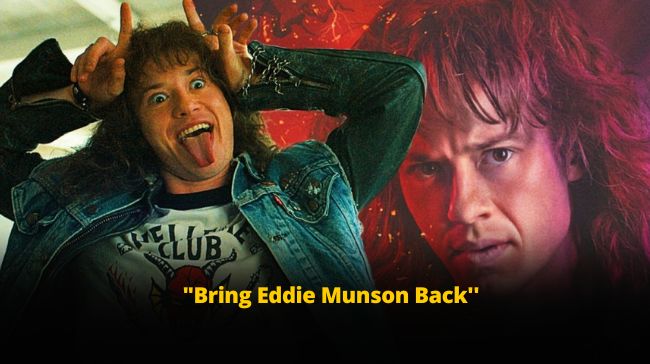 The drop of Stranger Things Season 4 Volume 2 has not been a hunky-dory for all of its fanclub. The intense death row that the fans witnessed was quite saddening. Especially the untimely death of Eddie Munson has just not been accepted by the fans, and the petitions to get their favorite Eddie back have already begun.

You know that a show has touched the audience’s heart if it is acclaimed by fans and critics both! We can say this has been proven big-time with Stranger Things.

The series of events in Season 4 has left the audience in shock. A series of gruesome deaths followed by the heroic and untimely death of the fan-favorite Eddie Munson is something that fans are not ready to take.

The new face – Eddie Munson, introduced recently in Season four, has become an all-time fav of the fanbase.

Bring Eddie Back – A Petition In Run!

Since the most extended two episodes of the series have been showcased, the big fanclub of Stranger Things have started demanding the return of their favorite Eddie Munson in the series.

A popular petition with the support of more than 43,000 Stranger Things fans has been in rotation, demanding the return of Eddie’s character to come back to life from the Upside Down! And this return should not just be a cameo for the flashback but a hardcore role in the series!!

The Change.org petition goes like this, “This is a petition I have started to bring back fan-favorite Eddie Munson. The Duffer Brothers have unfairly killed him off and many other fans and I think he deserves to be brought back and not just as a flashback, please sign this petition to spread awareness.”

During an interview with John Quinn, AKA Eddie Munson, the character seemed too excited to be a part of the series and shared how he would love to be up for everything here!!

The love for this sci-fi series seems to be undying with love received from the fans via rave and critical comments.

The characters have spectacularly played their part, which has connected to the fanbase through all means. The undying love from the fans proves how we all are happily stuck in the world of Upside Down.

The threads and Tweets from the fans are overwhelming. The public’s reactions to Eddie Munson’s death are heartbreaking, depicting intense love!! We are now waiting for the Duffer Brothers’ reaction to this petition!!