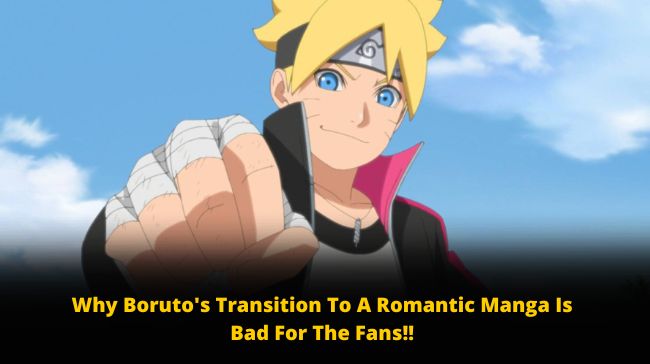 Although it appears Boruto has finally moved on from its predecessor, Naruto, the manga is becoming entirely different because of the abrupt and random changes in tone and pace.

Recent developments in the plot have changed Boruto’s appearance and feel from that of a ninja-themed action shonen to that of a romance shojo.

It seems Boruto has turned out to be a romantic manga, and it’s actually a headache for the fans. Here’s why!!

Boruto’s Transition Is Bad For The Fans!!

Boruto has had difficulty moving forward and finding another compelling antagonist after defeating the series’ main bad guy, Isshiki Otsutsuki.

Instead of completely switching directions, the manga resorted to introducing new members of Isshiki’s group, Kara, who had been kept secret until this point. Code, Isshiki’s replacement, appeared to be set to take over as the main antagonist, but things changed when two potent cyborgs, Eida and Daemon, came to life.

Amado, Eida, and Daemon were all created by Kara’s chief scientist, but they all have very different objectives and unusual and troublesome abilities. These factors have caused Boruto to change completely in just two chapters, even though they were all created by Amado.

The most powerful power in the Naruto universe belongs to Eida, who instantly makes anyone who sees her fall in love and powerless to resist her commands. Not only that, but Eida’s only goal appears to be to meet Kawaki, an ex-Isshiki vessel that escaped Kara and now lives in Konoha.

Eida seems completely smitten with Kawaki because she blushes whenever she talks about him. On the other hand, Code wished to destroy Konoha and carry out Isshiki’s wishes using Eida’s abilities. Readers learn that Code is in love with Eida in chapter #71 of the manga by Masashi Kishimoto and Mikio Ikemoto.

Still, it is unclear whether this is because of her talents or whether it is true love. Code’s new goal is to replace Kawaki as Eida’s sole “knight,” which puts him in conflict not only with Kawaki but also with Eida’s younger brother, Daemon.

Except for the brief conflict between Code and Daemon, the summary of Boruto’s chapter #71 reads more like a high-school drama in which numerous characters are vying for the same girl than it does like an action shonen manga. This might result from the fact that Eida’s abilities are so strong that they affect the entire plot.

But given that the character already has his objectives to pursue, Code’s falling hopelessly in love with Eida is utterly unnecessary (becoming a true Otsutsuki by harvesting the Chakra Fruit). Code has never shown Eida such affection, and his statement that he wants to know whether or not his feelings are genuine suggests that he might be in love with her after all. In actuality, every other character impacted by Eida’s powers is fully aware that it is all manipulation.

Boruto’s overall story, which was already struggling and drawing unfavorable comparisons with its much more successful predecessor, Naruto, is not being improved by the love triangle between Kawaki, Eida, and Code (with Daemon thrown into the mix). Boruto is rapidly becoming a romance manga, which does not look good. This could be the result of a deliberate choice by the authors or simply poor storytelling.

So, what are your views on Boruto? Tell us in the comment box…