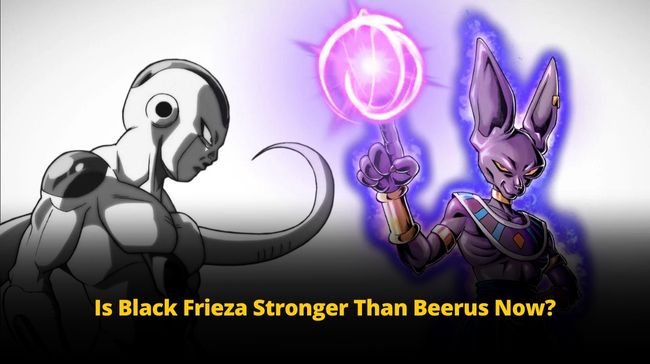 Per the latest chapter of the Manga, Frieza seems to achieve a new form that was not expected.

As per the old episodes, he does surpass his strength after achieving the Golden Form. However, this latest achievement is something that even Goku and Vegeta can’t ignore.

His old Golden Form is nothing in front of this new level.

The name of his recent form is Black Frieza. Discussions are also going on about whether this new form is more potent than Beerus: The God of Destruction or not.

A clear answer can’t be given until they both get into a brawl against each other.

Is Black Frieza stronger than Beerus?

Beerus’ power level is something that can’t be ignored. In the early episodes of Dragon Ball Super, we got to see that Beerus holds the capacity to destroy the entire planet with just one flick. Someone who can beat the world at its fingertips shouldn’t be poked.

Even Goku and Vegeta are nothing in front of him. For them, Beerus has become a bar that they want to overcome.

Whenever they surpass their strength, it is still nothing in front of Beerus’ power. It is like a never-ending mountain that they have to climb.

Although Black Frieza is stronger than Goku and Vegeta for now, it still is compared with Beerus or Whis.

Only Zeno is considered to be more powerful than Beerus. So, let’s not underestimate the power of Beerus in front of Frieza’s new form.

How has Frieza attained this new form of his?

Questions were all around when the new form of Frieza came into the picture that he could attain such new heights. Well, the answer to this theory was the Hyperbolic Time Chamber. Frieza invested his precious ten years in that chamber, after which he was able to achieve his new avatar.

Even Goku and Vegeta were shocked. Frieza, the most chaotic general who has destroyed innumerable planets with the help of his army, can now alone defeat the mightiest hero with his bare hands.

That’s correct; you all heard it right; Frieza was able to defeat Goku and Vegeta with his regular punches.

Even Gas, the old enemy, was nothing in front of him. What will happen in the new upcoming Manga of DBZ? All fans are waiting anxiously for it.

Black Frieza vs Beerus: Who Will Win?

To explain in simple words, even though Frieza could defeat the TUI and Ultra Ego form of Goku and Vegeta, he still can’t be compared with the God of Destruction. Furthermore, what will come will remain a mystery until the further chapters of Manga are released.