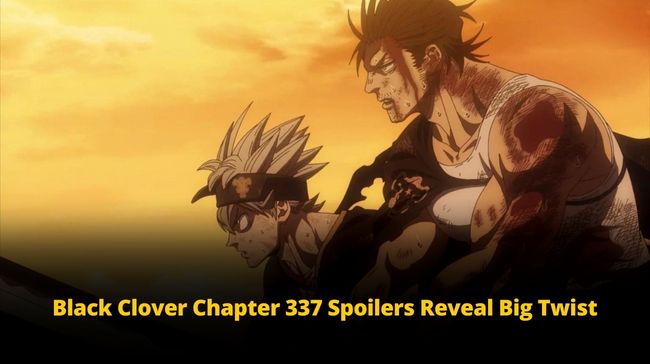 How have you been? We hope you’re enjoying and having a wonderful, fabulous day. We think you guys will be waiting for us only. Is it so? Any guesses about what we are bringing to you today? Ah, chillax guys, today it’s all about manga fans. Aren’t you excited to know what’s happening in Black Clover Chapter 337? So, here are some amazing Black Clover chapter 337 spoilers.

After all, what’s Black Clover all about?

Black Clover is a Japanese manga series written and illustrated by Yuki Tabata. The story follows Asta, who’s born without any magic powers. This is truly unknown to the world because everyone has some magical powers! But with his fellow mages from the Black Bulls, Asta plans to become the oh-so next Wizard King.

With so much happening in the previous chapters, this one finally reveals the whereabouts of Asta.

OMG, fans went crazy imagining where Asta would be. Ah, but it looks like fans would be more thrilled for the upcoming chapters. It’s a strange man who saves him.

But now the question is, what will he do in Hino Country?

Most of the part was focused on his introduction to the Hino country. This Chapter also reunites the craziest fans with the oh-so Black Bulls Squad. But did they make a scary mistake, though?

Ah, but this Chapter indicates that the group has no hint where their comrade is. They are clueless about where to find their friend or where he would be, but they are super determined to search for him! They have no plan, but we guess that’s the best plan.

Also, nothing has been known about the squad in Black Clover Chapter 337!!

While the group has a Spatial Magic User, their abilities are still limited for some reason. But, a new spell also allows him to teleport people and whatnot. There’s Vanessa with her Red Thread of fate spell, too. Isn’t that too amazing?

Ah, we love Black Clover Chapter 337: there’s so much happening!

Also, Black Bulls are clueless as they don’t know Asta would be absolutely on another continent. But will they travel to the Hino Continent and whatnot? Let’s assume, even if they found him out, will they be able to make him win against Lucius? Do you think they have some crazy secret technique? Even if they did, why wasn’t Asta taught all this?