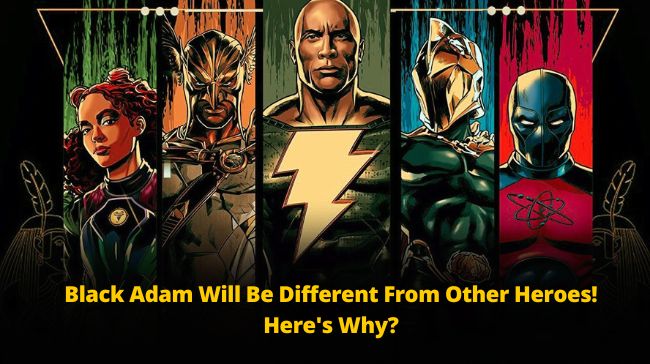 The upcoming superhero movie based on the DC Comics character of the same name, Black Adam, is scheduled to release on October 21, 2022

In an Interview about Black Adam’s tone, Collet-Serra was asked if he took any inspiration from other movies for his tone. He replied, “Yeah, but I always try to make my own movie,” And I feel like it’s Black Adam’s movie, Not Jaume’s. And a complicated thing is about the tone. It’s hard to balance because you might have something else in your mind, and then you have to write and cast; it feels different, so you must continually shape it. And you try to prepare for the worst and expect the best.

The film source of Black Adam is added by the director Collet-Sera because, in movies, Johnson’s characters are usually the ones to tackle the problems rather than originate them.

If there’s a problem, Dwayne comes to the rescue, Which is excellent. That is an average movie, and even in Jungle Cruise. Here is the thing, Dwayne is a Victor.

In this one, the problem for everyone else was him; the director said, And I deliberate the shift that made these movies different and energized—things you could do that you might have seen in other films.

Black Adam All Set To Release

The Film Black Adam is produced by DC Films, New Line Cinema, FlynnPictureCo., and Seven Bucks Productions. The distribution rights are with Warner Bros. Pictures, and this flick is intended to be a spinoff from Shazam!

Black Adam will be released in the United States by Warner Bros. Pictures on October 21, 2022

Black Adam – A Spinoff from Shazam! The storyline is about an enslaved and imprisoned Black Adam in Kahndaq who wakes up in the present day after 5000 years. He is determined that no one in the current times can get in his way, but Black Adam has to face the Justice Society of America.

What God is Black Adam?

Black Adam is an ancient Egyptian named after the Mighty Human. He is the one who is chosen by Shazam the wizard as his successor owing to his presumed moral purity. The same story is reprinted in Shazam! by DC.

Powers Of The Black Adam

Also referred to as the strongest metahuman on Earth, Black Adam once fought and defeated the Great Ten and the entire Marvel Family.

The fans are excitedly waiting for the release of Black Adam and more insider information on it!!! Are you interested too???

Black Adam is scheduled to release on October 21, 2022. Follow us for more such updates.