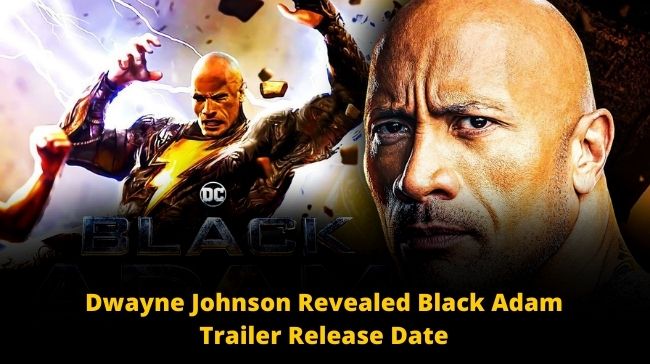 One of the most awaited movies of DCEU “Black Adam”, starring Dwayne Johnson, has revealed the Black Adam trailer release date.

A spinoff of another DCEU film “Shazam” and the latest movie in the franchise will showcase Dwayne Johnson as an anti-hero.

Alongside the famous characters of DC like Cyclone, Atom Smasher, Hawkman, and Dr. Fate, Dwayne will debut in the DC universe.

Originally, the movie was scheduled to release on July 29, 2022. However, it has already faced numerous delays in its release due to COVID-19.

The release date, for now, has been pushed back to October 21, 2022, but no official trailer has been released. So, what is the Black Adam trailer release date? Here is all we know.

Until now, a post has been shared by the Black Adam actor Dwayne Johnson himself on his Instagram handle. He informed his fans about the official Black Adam trailer release date.

Johnson told in his post that the most awaited trailer of Black Adam will premiere globally on June 08th, 2022, along with the BTS image of the film, calling it an iconic moment for him.

Another Warner Bros bannered film Jurassic World: Dominion, is set to hit the theaters on the very next day of the official Black Adam trailer release date.

The trailer is all set to release with the much-anticipated film Jurassic World, which is expected to have the biggest opening weekend of 2022.

However, its trailer shall play before many other upcoming blockbusters like Thor: Love & Thunder.

Although Warner Bros has not officially stated whether or not DC is up for the upcoming San Diego Comic-con scheduled for July 21st to July 24th, 2022. If there is a distinct possibility, fans can also expect to see an extended version of the Black Adam trailer premiere at Comic-con.

Will Shazam and Black Adam be together?

Warner Bros have plenty of time to promote and do marketing of the Black Adam movie as it is set to hit the theaters in October 2022.

They might even launch the second official Black Adam trailer in August or September. Not to forget the associated film of Black Adam, Shazam: Fury of the Gods is set to come out just two months after this film.

It will be interesting to watch how these associated characters have been put together and how their connection impacts each other’s films. So, fans, now that you know the Black Adam trailer release date, make sure to clear your schedules and watch it.

One more thing that you can watch is the bookmark option. Bookmark our website to get all the latest updates on the latest movies and web series.