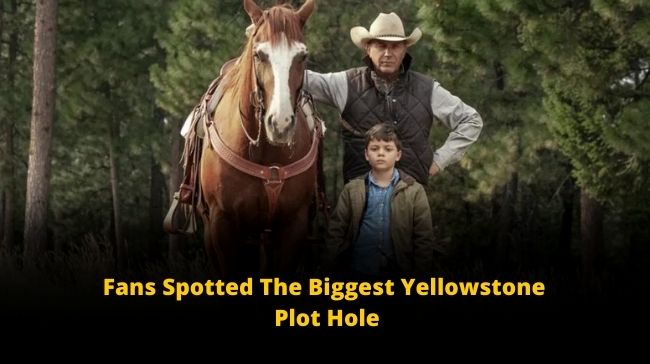 Despite being the most popular and praised work of Director Taylor Sheridan, Yellowstone is known to leave major holes in the plot that left the fans with several questions about the show.

One of the biggest questions fans have about the Yellowstone plot is about the whereabouts of Lucky, the horse owned by Tate Dutton (Brecken Merrill).

Season 2 showed young Tate Dutton finally get a horse of his own after long desiring for one.

When he’s given the horse, his grandfather John Dutton (Kevin Costner) tells him “His whole life is in your hands now, Tate. How you treat him is how his life goes.”

This scene is supposedly a very sentimental moment in the show where Tate is given the responsibility of his horse and he promises to take full responsibility for his new pet, who he names Lucky.

Fans speculated on his relationship with Lucky with the growth of Tate’s character as a young man and expected more of Tate and Lucky’s interaction in the further seasons.

However, after the release of season 4, there’s reportedly no mention of Tate’s horse Lucky, which leaves fans questioning. So, what happened to Lucky? Here is all we know.

Throughout the whole Yellowstone plot, Tate Dutton (Brecken Merrill) has been facing a lot of

struggles that do not change in season 4.

In the first episode itself, Tate has to make the difficult decision of choosing to shoot a man in order to save his mother from being attacked.

Although he does not hesitate to do so, it is seen that he feels terrible about what he had to do and hides underneath a bed to be safe.

However, among all the hardships he faces in the season, there is no scene of his relationship with his horse, Lucky. So, why did the Yellowstone plot leave Lucky’s story unaddressed?

“Whatever happened to Tate’s horse?” writes a user on a Reddit thread. Other fans on Reddit also joke about the reasons for the disappearance of Tate’s horse being that Lucky, the horse, has been sent to Texas to “learn how to be a better horse.”

In the middle of all this, actor Brecken Merrill made a throwback post with the horse, who plays Lucky in the show on Instagram on December 15, 2021.

Even though the post itself had no captions, it’s sure that Brecken definitely did not forget about Lucky. Obviously enough, the post had millions of comments from fans who wanted to know what had happened to Lucky.

Brecken also mentions that this is the most asked question to him as well, in an Instagram comment.

Unfortunately, it seems that the part of the horse Lucky was just yet another device created by the story writers to move the Yellowstone plot forward and to add sentimental value to the story.

The last time we have seen Tate and Lucky together was when Tate went to feed Lucky but suddenly was kidnapped by the Beck brothers.

Fans of Yellowstone, however, still hope to see the beautiful relationship between Tate and his horse Lucky in the future seasons.

Until then, it is safe to assume that Lucky is probably one of the Yellowstone plot holes forgotten by the story writers.