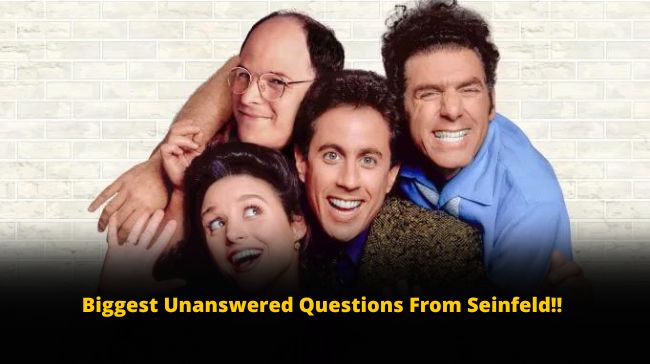 The comedy series Seinfeld, created by Larry David and Jerry Seinfeld, was a huge hit worldwide viewer. This series had a total of nine seasons and aired on NBC from 1989 to 1998.

Starring stand-up comedian Jerry Seinfeld, who is based in New York and has a group of friends with whom we can each relate in their day-to-day circumstances.

Despite all the fantastic seasons, the show provided, we saw the series close by showing that the main characters were imprisoned because of their selfishness. The show left a lot more questions, most of which remain unanswered.

How did the quartet happen to be imprisoned?

How they all ended up in jail is the main mystery!! They were arrested under the Good Samaritan law because they witnessed a robbery but could not stop it.

And they were all given a one-year jail sentence. Even after being in jail, four of them were having a normal conversation, as always. Just the difference was that they were in jail.

What was Elaine going to tell Jerry in the finale of Seinfeld?

As was revealed in the finale, the quartet had a terrible experience while flying in a private jet to Paris. Kramer accidentally bumps against the controls when everyone was worried that the plane would crash.

Elaine decided to tell Jerry everything because she believed it might be the last chance. However, the pilots were in control and made a safe landing before she could say anything. And we never learned what she had been trying to tell Jerry.

How does Kramer earn money in Seinfeld?

Kramer’s employment status was among the most mysterious characteristics of the main protagonist. We noticed that Kramer had been attempting to become wealthy while working odd jobs.

However, he could not earn enough money. In season four of Seinfeld, we have seen Jerry make a brief hint to Kramer about receiving a huge amount of money in the past, yet the sources were never shared.

What was George’s special assignment?

George worked in Seinfeld in a multitude of positions and frequently had his employment ended. However, he had a remarkable job with the New York Yankees. George’s boss, Mr. Welhem, gave him a special assignment. While performing the project, George learned that Mr. Wilhelm suffers from dementia, yet he carried on with the assignment.

George wanted to learn more about the assignment and gather as much information from Mr. Welhelm. However, as a result, we discovered that he performed the special assignment while initially believing that George did. In Seinfeld, we were never told what the special duty was that Mr. Welhelm had completed in place of George.

So, these were some shocking questions that were left unanswered by Seinfeld…

Read More – Yellowstone Faith Hill Did Not Take Showers To Play Her Role!! Thanks To 1883!!