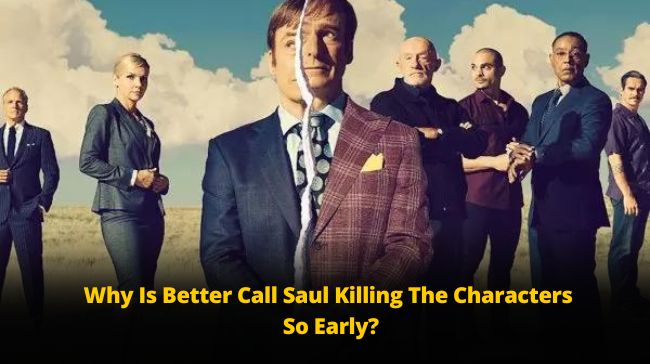 The Fanclub of Better Call Saul is in a state of shock after witnessing the two main characters’ sudden demise!! We are wondering what made the writer’s team draft these premature deaths of the key characters so early!!

The sudden and shocking death of the critical character Lalo Salamanca AKA Tony Dalton, in the 8th episode of Better Call Saul Season 6, has been a shocker to its entire fan world! Lalo died at the hands of Gus in the show.

The viewers had to see another shocking murder of Howard Hamlin in the same episode of Better Call Saul Season 6. Writers, please note that the fans were just not ready for this!!!!

What are the writers of Better Call  Saul Season 6 upto? The fans wonder and question the writer’s job here, who gave closure to these important characters at such an early stage.

It has made the fans think about how the story would be shaping up, posting these unexpected events in the series.

Episode 8 of Better Call Saul Season 6 ended with the visuals of the crucial deaths of these two characters in the series.

Their graves are buried in the foundations of the meth lab and shall be operated by Walter White in the latter part of the series.

What is the fate of Non- Breaking Bad characters in Better Call Saul?

As we all know, Better Call Saul is a prequel to Breaking Bad. So the fans of Breaking Bad were aware that Gus would survive against Lalo, but the fate of the non-Breaking Bad characters remains unknown to the fans.

Thus very few could guess the death of Lalo and Howard. These characters are dead, and the season has yet to serve the final five episodes.

Now, this gets the Fanclub in a state of jeopardy, and they tend to wonder what is left to be done in the last five episodes; a few things are pretty obvious now with the death of the key characters.

As the constantly threatening character Lalo has been pulled off from the series Better Call Saul Season 6, it seems that the only focal point for the final five episodes could be the clashes between Jimmy & Kim resulting from their different approaches towards their legal profession and moral values.

The core of the story’s crux has always been Jimmy & Kim, so now, after the instant removal of Lalo, the focus is shifted entirely to them. This would enhance the story with the coming episodes, and we are waiting for it!!