Hunting for a good web series to enjoy this weekend? How about binge-watching the best anime series of all time. Anime is always super-entertaining, and it’s loaded with thrill, action, suspense, and fun. However, in today’s date, there is a bundle of jaw-dropping anime shows.
So, it’s pretty difficult to pick one for this weekend. But, don’t worry, as here we have delivered the best anime shows a list that will make your weekend super-interesting and fun-loaded. So, make sure to go through the complete article.
It’s been a dream year for the anime world. We have seen tons of quality anime series debuting this year whether it’s Demon Slayer: Kimetsu no Yaiba or Naoko Yamada’s The Heike Story and Platinum End.
If you are new to this anime world, there may be some masterpieces that slipped off your radar. But don’t worry as we are here to deliver the ultimate dose of entertainment to your doorsteps.

The popularity of anime has significantly increased in the last few decades. While most anime fans hailing from the 90s admire series like Dragon Ball, Naruto, and more, many like the latest anime series.
So, after navigating through a long list of both 90s and the latest anime shows, we have prepared a list of top anime shows 2021-2022, that are surely worth a watch. Make sure to read the complete article to know everything about the best anime series.

Best Anime Series Of All Time 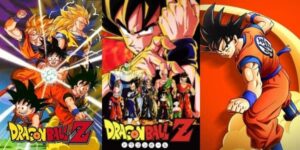 Dragon Ball Z is one of the top anime series that follows the mind-boggling adventures of Goku, the Saiyan. It revolves around the amazing arcs surrounding the Z-warriors on Earth. It’s an official sequel to the Dragon Ball series created by Akira Toriyama. The series aired from April 1989 to January 1996 on Fuji TV in Japan.
Dragon Ball Z primarily covers four arcs, including Vegeta’s arrival, Frieza Saga, Cell Saga, and Majin Buu Saga. The story primarily covers the life of Goku. While other characters like Gohan, Piccolo, Vegeta, Krillin also play their respective parts in the series.
With over 8 IMDb ratings the series stands top in the list of all-time best anime series. 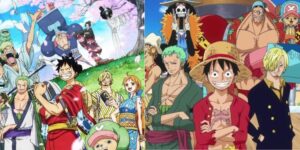 One Piece is one of the most popular Japanese manga series curated by Eiichiro Oda. The show follows the amazing adventures of a teen named Monkey D. Luffy, who gains a rubber body after he eats a devil fruit.
The story revolves around the rubber boy and his pirate crew on the mission to locate the greatest treasure left by Gold Roger, the Legendary Pirate. They jump into a mission named, “One-Piece.”

One-Piece consists of a total of 981 episodes. While we have mentioned all One-Piece sagas below –

When it comes to the best anime series from the 90s, hands down, Naruto is the top choice of many fans. Naruto is one of the flagship-level Japanese series curated by Masashi Kishimoto. The story is distributed into two parts, while the first part surrounds Naruto’s pre-teen years and the sequel covers his teen life.
The series is based on the one-shot manga and it showcases the amazing adventures of a ninja with supernatural powers.

Naruto has a total of 720 episodes. So, we have mentioned the complete list of Naruto sagas below –

Hunter x Hunter is one of the premium Japanese series written by Yoshihiro Togashi. The plot focuses on Gon Freecss, a young teenager who discovers the true identity of his father.
He came to know that his father is a world-class hunter. This inspires him to train himself as a top hunter. Later he reunites with his father and accomplishes his mission of being a hunter. 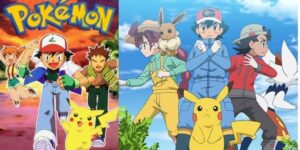 Ever imagined how it will feel like watching some bizarre creatures roaming free in the world and the creatures are capable of destroying anything within a blink with some supernatural attacks. Pokemon is one of the top anime that aired back in 1997.

Covering all the main series, Pokemon has 1180 episodes along with 23 movies and a bunch of side stories. Here is the list of all Pokemon seasons –

As per the ratings from IMDb, we have presented a detailed list of the best anime series to watch –

Ranking of Kings follows Bojji, a weak and deaf prince who cannot even carry a sword. As the first son, in spite of thousand barriers, he dreams to be one of the greatest kings of all time.
So, join him in navigating the most difficult journey in the Ranking of Kings. It’s the top-ranking anime with an IMDb rating of 9.2.

Racking an IMDb rating of 9.1, Fullmetal Alchemist: Brotherhood is one of the anime that aired from 2009 to 2012. The story follows two brothers who are on the quest for the Philosopher’s stone.

Attack of Titan is one of the hottest anime series hailing from 2013 to 2022. The story follows Eren Jaeger, a young lad who takes the incredible responsibility of wiping out the giant Titans after they killed his mother and destroyed his village. Attack of Titans got an incredible rating of 9.0 on IMDb.

Hunter x Hunter is one of the top anime of all time. It follows Gon Freecss, a youngster who discovers his father is one of the biggest hunters and this inspires him to become the world’s best hunter. Running from 2011 to 2014, the show got a rating of 9.0 on IMDb.

With an IMDb rating of 9.0, Death Note is one of the flagship anime series. The plot follows a highly intelligent teenager as he jumps into a secret crusade to wipe out a bunch of criminals from the world.
So, if you are hunting for a binge-able anime series to watch, Death Note can be the best choice.

Within the last few years, Netflix has turned out to be one of the leading online streaming platforms. It has got a huge audience base with an incredible library of rich content. Whether it’s some edge-dropping movies or jaw-dropping anime series, Netflix has delivered the best content to its audience.
So, if you are searching for the best anime to watch this weekend, make sure to visit Netflix. Here is the list of best Netflix anime series –
#10 Attack on Titan
#9 Little Witch Academia
#8 Devilman Crybaby
#7 Beastars
#6 Jojo’s Bizarre Adventure
#5 Baki
#4 Zero/Fate
#3 Fullmetal Alchemist: Brotherhood
#2 Neon Genesis: Evangelion
#1 Hunter x Hunter

There are tons of romantic anime, but these five are the best romantic anime series as per IMDb –
#5 Cross Game (2009-2010)
Cross Game is one of the anime shows that cover all the entertaining aspects. Whether it’s a sports drama, romance, comedy, or fun, Cross Game is incredible in all the departments. The story follows the insane tale of Aoba and Kou, who will initially be enemies.
But destiny has other plans and we witness one of the incredible love stories of all time.
#4 Kids On The Slope (2012)
Kids On The Slope is one of the most popular period drama anime series from 1996. The story starts by introducing Koru Nishimi, a loner. However, the plot shifts to a romantic scene where he meets his opposite, Sentarou Kawabuchi, with a Jazz fanatic.
#3 NANA (2006-2007)
Nana Komatsu is a common girl who fell in love without any caution. While she chases Shouji Endo, her boyfriend who is a musician. She steps into the same train with a fellow musician Nana Osaki and this leads to an incredibly romantic story.
#2 CLANNAD: AFTER STORY (2008-2009)
The heart of the CLANNAD: AFTER STORY series is its pure music. The anime presents a slice of life. It follows Nagisa and Tomoya, two high school graduates as they drag their beautiful relationship an extra mile. Loaded with tragedies, CLANNAD: AFTER STORY is one of the best anime series to watch.
#1 Your Lie In April (2014-2015)
The amalgamation of music and romance is truly worth a watch. Your Lie In April is one such movie. It’s a tale of Kousei Arima, a pianist, who leaves the world of music after his mother’s death. Meanwhile, Kaori Miyazono, an adorable violinist enters the scene and gives Kousei a new life. This is one of the best anime series that ran between 2014 and 2015.
Frequently Asked Questions (FAQs)

Ans – As per the audience rating, Fullmetal Alchemist: Brotherhood is the #1 anime with 9.09 points.

Q4: Which Anime Has The Best Story?

Q5: Which Are The Best Anime Villains?

Ans – Some of the best anime villains are – King Bradley (Fullmetal Alchemist: Brotherhood, Madara Uchiha (Naruto Shippuden), Hisoka (Hunter x Hunter), Gilgamesh (Fate series), and more.
Final Words
So, all the anime fans gear up as this weekend will surely be a remarkable one. Make sure to comment down your picks for the weekends. Hope you loved the article. Share connected for more exciting articles in the future.
Bookmark our page as we cover all the hot news and updates on the entertainment world.