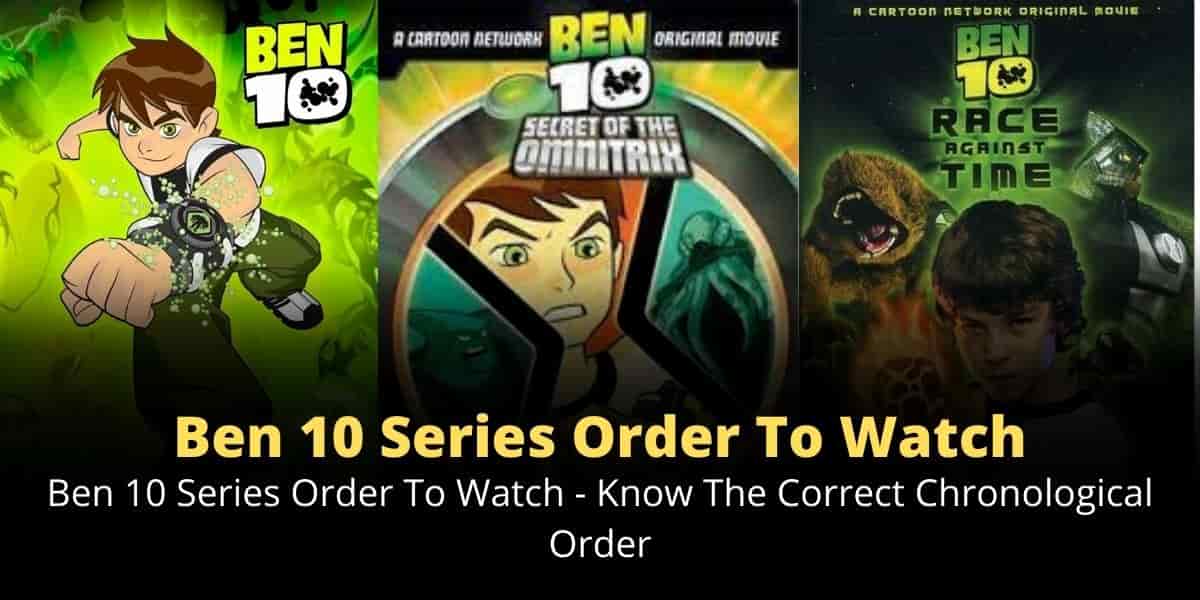 Ben Tennyson, a little boy who receives the Omnitrix, is the protagonist of the story. It is an extraterrestrial device that resembles a watch and holds the DNA of numerous alien races. Ben can turn into strong aliens with a variety of skills with the Omnitrix.

The Omnitrix comes with ten aliens at first, but Ben adds additional species later by inserting their DNA.

We are aware that you may be curious to know all the Ben 10 series order to watch. So, we are going to include all of the Ben 10 films and series in chronological order in this post.

Along with the chronological sequence, we will provide you with some more information about the films and the series as a whole.

Is it important to watch the episodes of “Ben 10” in order?

Because there are five series and five films in the franchise, not all of those are part of the same narrative timeline. If you want to understand every small detail, we strongly advise you to watch them in order.

Ben 10 is not very perplexing in terms of plot, but this arrangement will simplify things for you. So, make sure to check out our Ben 10 series order to get the ultimate dose of entertainment.

What is the overall number of episodes and movies in the Ben 10 franchise?

The Ben 10 series consists of five television shows and five animated films as of November 2021. There have been 415 episodes of the five animated series that have been broadcast so far, spanning over 22 seasons. 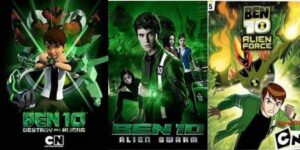 Here are all Ben 10 Movies in order to watch –

This is the complete list of movie releases of Ben 10. You can watch these movies according to the release timeline. However, it is highly recommended to watch these movies along with the Ben 10 series. We mention the chronological order of the series and movies in the below section.

This section will detail the Ben 10 franchise in chronological sequence. Although the order does not correspond to the actual release sequence, we have chosen to use the storyline as a determining factor.

Ben 10 original series comes first in our list of Ben 10 watch order. Ben Tennyson (played by Tara Strong), a ten-year-old child on a cross-country summer break with his cousin Gwen (played by Meagan Smith) and their grandpa Max (portrayed by Paul Eiding), is at the core of the series.

Ben discovers an extraterrestrial pod containing a weird watch-style gadget named the Omnitrix on their first night camp in his grandfather’s RV, popularly known as the “Rustbucket.” The gadget then permanently connects to his wrist, allowing him to turn into a number of alien life-forms, each with their own set of talents and abilities.

Ben would learn the duties of being a hero with his acquired talents. Various adversaries assault the Tennysons on their trip, ranging from extraterrestrial invaders to otherworldly creatures.

Tara Strong, Meagan Smith, Paul Eiding, Steve Blum, Dee Bradley Baker, Jim Ward are among the top cast in this series. The series aired from December 2005 to April 2008. There are a total of 52 episodes in this series and 4 seasons.

We recommend watching this series alongside Episode 5 of Season 4 of Ben 10 (2005). The animated sci-fi film “Ben 10: Secret of the Omnitrix” is inspired by the American animated tv show Ben 10. It first aired in the US on Cartoon Network in August 2007 and in the UK in October 2007.

Although it premiered months before the concluding episodes of season 4, it was announced during the “Ben 10 Week” in April 2008 that this film serves as the series’ formal ending. The film is set after “Ben 10 vs. the Negative 10” in terms of chronology.

Ben 10: Secret of the Omnitrix was made in three separate versions, each with a distinct alien demolishing Animo’s DNA weapon. Initially, Ben utilizes Heatblast, after that, a new form Eye Guy, and for the third time, XLR8. The film’s DVD, and the 4th season DVD, contained a fourth version (really a specialized copy of the Heatblast version).

Trivia inserts are scattered throughout the film in this special edition. The film was released on DVD for the first time in May 2008, only at Wal-Mart shops. However, none of the two modified versions, nor the original version of Heatblast, were included. All three versions of the film are included on the fourth season DVD.

An anonymous entity teleports into Bellwood and begins destroying everything right away. In the shape of Heatblast, Ben Tennyson challenges him. Ben seems to demolish the adversary after a brief fight.

Max Tennyson identifies him as Eon, an extraterrestrial kidnapped by the Plumbers over two centuries ago. He came half-dead and carrying the “Hands of Armageddon,” a device that, if triggered, would open a temporal rift to the alien’s own realm and unleash his species upon Earth.

They arrive at the containment area where Eon is meant to be housed, only to discover that it is empty and that his guardian has aged to the point of death. So this series stands at number 3 on the list of Ben 10 series in order.

The film picks up after the conclusion of the first series, with Ben now living in Bellwood and moving on with his career. Ben gets caught in the crossfire of Gwen’s magic, which impacts the Omnitrix and leads it to go haywire.

Tetrax arrives to pick up Ben so Azmuth can repair it, but they are ambushed by a Galvanic Mechamorph hunter who is also on the lookout for Azmuth. The malfunction of the Omnitrix causes Ben to teleport throughout the planet, drawing the Mechamorph’s attention, while Max, Gwen, and Tetrax struggle to track him down.

After five years of the original series ended, the plot of “Ben 10: Alien Force” has been set. Ben Tennyson is now 15 years old and returned to normal life. Ben has pulled off the Omnitrix and has matured from a small child to a confident adolescent as a consequence of his adventures.

However, Ben is compelled to bring back the Omnitrix due to Grandpa Max’s inexplicable disappearance. In addition, Ben, Gwen, and his old foe Kevin are focused on finding Grandpa Max.

At the same moment, they need to engage the Plumbers’ children’s (Half-human, half-alien offspring or grandchildren of elderly plumbers) assistance and fend off assaults from a new foe, the Highbreed.

Vilgax returns as the main threat in the concluding season, challenging Ben, Kevin, and Gwen to overcome tougher obstacles and uncover more mysteries about the Omnitrix. Ben fights Vilgax in their last confrontation in the final series, The Final Battle, and destroys the Omnitrix in the war.

Ben is now equipped with a new Omnitrix named the Ultimatrix towards the conclusion of the story.

Recommended time to watch this film is between the 10th and 11th episode of season 3 of Alien Force.
Ben, Kevin, and Gwen conduct a sting operation on illegal trade merchants who are attempting to sell extraterrestrial technology. The technology, allegedly dormant alien chips, awaken and assault them in the middle of it.

The trio defeats them, but not before running across Elena, an old acquaintance of Ben and Gwen’s and the child of a former plumber who has gone rogue. She asks for their assistance, but the group is hesitant to believe her. As the three dig more into the chips, it becomes clear that there is more to the story than meets the eye.

Dee Bradley Baker, Alex Winter, Wendy Cutler, Joyce Kurtz, and Patrick Cox are among the other top cast of the film.

The events of “Ben 10: Ultimate Alien” occur a few weeks after those of the previous season. Ben Tennyson, now 16 years old, learned to harness the capabilities of the Ultimatrix, a tweaked version of the Omnitrix that can morph Ben’s alien forms into even more powerful versions known as “ultimate forms.

The public’s reaction to Ben’s exposure is polarized, with younger admirers idolizing him and adults (especially news reporter Will Harangue) seeing him as a threat to society.

Ben must now adapt to a new existence that includes combating the forces of evil with his friend Kevin Levin and cousin Gwen Tennyson and handling the drawbacks of his newfound popularity.

Yuri Lowenthal, Ashley Johnson, Dee Bradley Baker, Greg Cipes were among the top cast. The series comprised 52 episodes and was released between 2010 to 2012.

The series chronicles the exploits of Ben Tennyson, a sixteen-year-old bearer of the Omnitrix.  The plots of “Ben 10: Omniverse” switch back and forth of 11 years old Ben and 16 years old Ben. Ben gets a new friend, a novice extraterrestrial plumber named Rook Blonko, when Gwen departs for college and Kevin departs to be closer to her.

Ben examines the weirder aspect of things in the alien subterranean while on a quest. He was investigating a mysterious underground alien town titled Undertown and learned that adversaries from his past are seeking a rematch.
The “Ben 10: Omniverse” is shown to share the same universe as “The Secret Saturdays” in “TGIS.”

In this revival of the iconic cartoon series that first aired between 2005 and 2008, the amusing 10-year-old Ben Tennyson comes back younger at 6-7 years of age. During the children’s summer holiday, Ben Tennyson departs on an excursion with Cousin Gwen and Grandpa Max.

Cartoon Network Studios developed the series. Man of Action Entertainment conceived and served as executive producer of series. John Fang was the supervising producer. The series was aired from October 2016 to April 2017 and comprised 172 episodes.

When an explosion from Ben’s history returns to wreak twice the harm on Team Tennyson and Earth, Ben needs to go interplanetary to rescue the planet. Ben left Gwen and Grandpa Max to guard the globe while he was away.

But when our young hero is mistaken for a space evil, Ben is required to protect himself in a century-long trial! So this is the last pick in our list of Ben 10 in order.

Are More Ben 10 Series on Work?

Now that you know the correct Ben 10 series order, you may be clamoring for more. So, are there any more Ben 10 on the cards? Here is all we know.

In terms of the animation series, there is no information on the new Ben 10 episodes, but considering the program’s popularity, a new installment is highly possible.

However, we know that HBO Max is working on a live-action Ben 10 program that will premiere later this year on the platform. Warner Bros. and HBO have not released any additional information since then.

Ans – Not directly, but indirectly it fits in the DC Universe. Ben 10 is under CN Network, owned by WB, which is under DC.

Q3) Is There Any Sequel To Ben 10 Omniverse?

Ans – We have Ben 10 Omniverse 2, a live-action video game picked up from the American series coming with the same title.

Q5) How Many Seasons Does The Original Ben 10 Have?

Ans – Check out our Ben 10 series order section to know more about the correct sequence to enjoy the series.

We know you are a true Ben 10 fan and if you have missed out on any series or movie of Ben 10 make sure to go through the Ben 10 series in order to squeeze out every drop of entertainment. Share this article with all Ben 10 lovers and make sure to follow us for more exciting content.